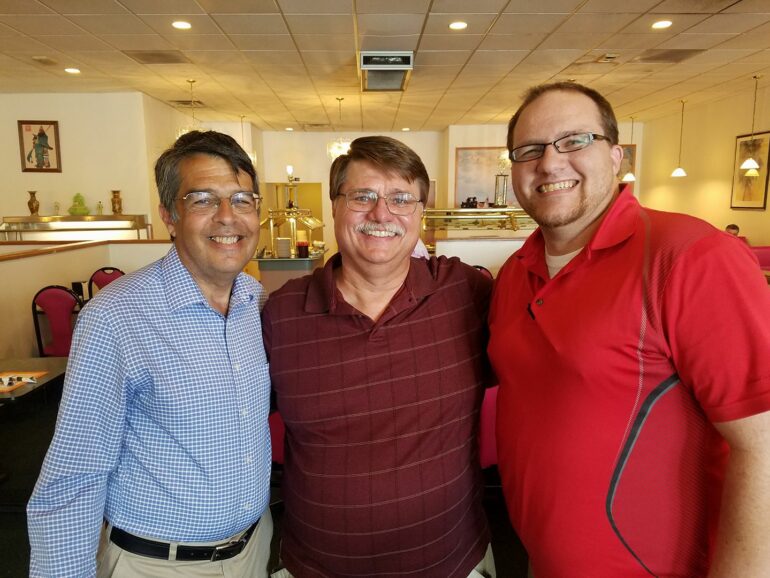 There aren’t many bosses with an eye for talent keen enough to know within 15 minutes of starting an interview whether a person is a good fit for a job.

Roger Di Paolo was one of them.

It happened to me almost exactly 19 years ago and I saw it happen at least half a dozen times after that.

Over the decades he worked as a journalist and editor, Roger trained dozens of award-winning reporters and writers.

He loved local news. His mind and memory for local and national history, politics and a person’s genealogy made him a human encyclopedia.

“Go ask Roger,” the refrain went. “If he doesn’t know, then he knows where to find it or he knows who knows.” Without fail, he had an answer for a historical question or a book that had the answer.

Young reporters like myself would bound into his office or up to his desk and pitch a news item. Invariably, he would be patient and listen, then smile and say the same five words.

“You’ve got a great story.”

On busy news days, with a wealth of stories to choose from, Roger’s pride swelled: “We’re going to have a great front page tomorrow.”

When you were on deadline as an editor, the common demand was: “Make the headline bigger.” Especially if it was a major story, and your suggested headline was unacceptably less than 42 points.

Roger’s emotion fueled his own writing, and he won his fair share of awards for his reasoned and thoughtful dissection of local, state and national matters.

“I do my best writing when I’m mad!” Roger practically yelled at me once, throwing an editorial on my desk for me to proofread after I wrote about a particularly controversial legal decision. Then he laughed and smiled.

Roger had an endearing love for the cities of Kent and Ravenna and their people, and he desired to see them succeed. Yet he wasn’t afraid to let his staff go after stories that cast politicians or city leaders in a bad light as long as the facts supported it.

A good boss defends and supports their staff, and puts up a wall between them and certain people who try to meddle in editorial affairs. And he could walk a reporter through a difficult story with difficult subject matter and be a calming influence when tempers or emotions were up.

Roger detested bullies and had no patience for anyone who called to offer unfair criticism of the paper or its staff. He hated the “Sound Off!” feature in the Record-Courier, which was not under his control.

And no one was let off the hook if they tried to call the paper by its unfortunate and uncreative alias “The Wretched Courier” or wrote or called throwing around slurs. He’d just as soon hang up on you.

Roger also liked making the acquaintance of callers by the same name, and always asked whether they spelled it like his name or “Rodger” with a D.

“Too funny,” he’d say when he finished laughing at a joke or a bizarre news story. I heard that phrase a lot in the decade-and-a-half we were colleagues.

His brain had the names of every second-act Hollywood star who ever performed at Ravenna’s old Carousel Dinner Theatre — as well as who went out on the town after the show and where, and who skipped out on paying their booze bill.

He knew practically every line to the movie Animal House and most, if not all, of the words to any Disney musical number.

“Dave-O, you should write a book,” he once said. “And if you ever do and they turn it into a movie or TV show, I want Pierce Brosnan to play me.”

I still own all the many books Roger gifted me. On his last day as editor in chief, he presented me with the bust of John F. Kennedy that had long adorned his desk. It now sits on my desk.

Roger was a proud dad who never stopped bragging about what Brian was doing or how the two of them had spent a weekend watching some strange show on TV. He was a proud Catholic who excitedly dove into genealogical research and exuded pride in his Italian heritage.

He loved estate and yard sales, food and drinks. He would take pictures of his immaculately prepared dining room table at holidays and of the food he ordered when dining out with his husband Tim at whatever the newest restaurant was in the area and share them on Facebook.

He could take a photo with his iPhone that would make the front page, with a trained eye for color and lighting. He loved framing details of Kent’s older downtown buildings and alleys.

Beyond all that, Roger was one of the kindest men I ever knew. He welcomed a 22-year-old kid from Jersey into his newsroom, and gave him a chance to tell Portage County stories.

When my father had emergency surgery for brain cancer and I had to quickly drive out to the East Coast, I broke the bad news to Roger and asked for some time off.

He gave me a hug and shoved $40 worth of gas money into my hand.

“Dave-O, I know I’m your boss and I’m not supposed to be your friend … But fuck it. You take whatever time you need.”

Thank you, Roger, for being the best boss I’ve ever had and a true friend.

You’ve got a great story.

Dave O’Brien is a former reporter for the Record-Courier.

It’s almost fall sports season and the pandemic isn’t gone – what next?