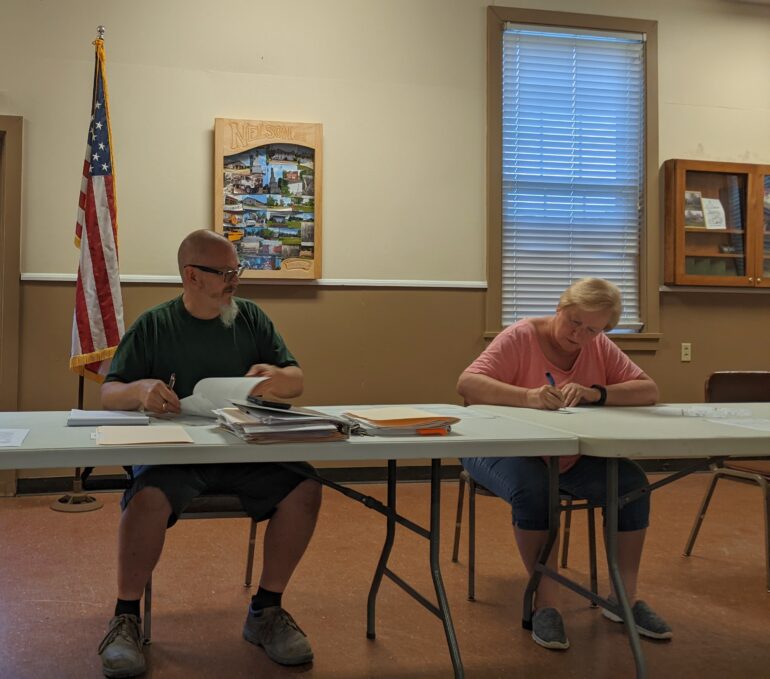 Fiscal Officer Kevin Cihan not in attendance: on vacation

Mr. “Ed” Eakin may have his home demolished after Zoning Inspector Jackie Kable had mailed him both a certified and non-certified letter to his mailbox regarding the upcoming demolition of his home. He has not responded. She emphatically stated, “You are going to come home someday and your house is going to be gone … you need to talk to us.”

Mr. Christopher Bailey is going to donate a fine art-size map of the history of Nelson for display.

An additional 40 tons of asphalt, 1,200 tons of limestone as well as CRS-2 (rapid-setting asphalt emulsion) have been purchased for Prentiss Road.

Tyler Thoren will become a full-time employee of Nelson Township starting Aug. 15. He will start at $18 per hour with full benefits and a six-month performance review.

There has been a noise complaint at Quarry Park, where music was playing loudly from a large metal stage. There was not a permit to build the stage, and as of now, the stage is no longer standing.

Isaac Mills Inc. has purchased a neighboring vacant property to develop a parking lot and has applied for the “no man’s triangle.”

Opening Statements: Following the Pledge of Allegiance, Trustee Mike Kortan announced that he would be filling in for Fiscal Officer Kevin Cihan and Trustee Joseph Leonard.

The minutes from the July 20 meeting were unanimously approved.

Zoning Report from Jackie Kable: Zoning Inspector Kable said many people are interested in doing things in the township, and they will get back with her about development on State Route 282 and on Reiki farm for a business there. On July 21, Jackie Kable dropped off the Homage Agreement that [Trustee Mike Kortan] had signed. Trustee Anna Mae VanDerHoeven updated the council that “it did not pan through” [but it was unclear to this documenter what that exactly pertained to]. Trustee Mike Kortan clarified that “he did not want it to happen” because an unknown individual could not afford a dumpster, and this individual told Joe (Trustee Joe Leonard) that he was working on it himself. He has 120 days.

Next, the trustees discussed a noise issue. Anna Mae VanDerHoeven said an individual had lied when they said that it was simply farming supplies and that there would be no noise issue. Jackie Kable said she talked to the prosecutor, and the prosecutor has not answered. Trustee Kortan suggested it may still be a private matter, and Trustee VanDerHoeven surmised that perhaps the prosecutors simply don’t want to tackle the issue. Zoning Inspector Kable stated that she would be willing to testify to a judge, win or lose. Trustee VanDerHoeven suggested that they invite the prosecutor, whom they called “Brett,” to the meeting, mentioning “Sunshine Law.” And they wanted a way to discuss matters during executive session and discuss with their lawyer in order to express that they should pursue legal action. Trustee Kortan expressed that perhaps they should go that route.

Zoning Inspector Kable added that the prosecutor was confused about some addresses to houses that were to be demolished, stating that he has not mailed any of that out yet. She sent a certified and non-certified letter to Mr. Eakin to his mailbox. The postal carrier confirmed with Zoning Inspector Kable that she drops off the mail, and somebody is there to pick up the mail. Kable also spoke with “the lady next door,” who stated that Mr. Eakin “shows up and drops things off there” [7:03]. Trustee VanDerHoeven clarified with Kable that Mr. Eakin never signed for the certified mail. Kable emphatically said, “You are going to come home someday, and your house is going to be gone … you need to talk to us” [7:25]. VanDerHoeven and Kable asked if anyone knew where Mr. Eakin is living in the meantime. Road Supervisor Chuck Vanek clarified that they were talking about “Ed,” and they confirmed. He replied that he might know where he is. When asked if he lives locally, Vanek stated that he did not believe “Ed” Eakin did not live locally but could find out for the Trustees. Trustee VanDerHoeven requested that Chuck Vanek notify Mr. Eakin about his home’s upcoming demolition. Trustee VanDerHoeven said that they are billing us $10 and that Mr. Eakin will be charged that amount [this documenter is unsure if they are referring to the demolition].

Community House and Pixley Park Report from Sandy Huzl: Mr. Christopher Bailey is going to donate a fine art-size map of the history of Nelson; he ordered the map for his research on the area to display in the Community House. All Trustees were happy to receive the map and asked that Huzl keep them updated on the matter.

Road Supervisor Report from Chuck Vanek: The asphalt overlay on Prentiss Road is almost finished, but they need an additional 40 tons of asphalt. Trustee VanDerHoeven made a motion to purchase the additional 40 tons; the trustees seconded that motion.

The group voted to replace the LED service light near the Nelson Community House’s recycling bin.

Trustee Kortan made a motion to hire Tyler Thoren as a full-time employee of Nelson Township, starting Aug. 15 at $18 per hour with benefits and a six-month review. Trustee VanDerHoeven seconded the motion.

Public Forum: Trustee Kortan opened the meeting to questions from the public. Resident Kathy Tylicki asked for updates regarding the noise complaint at Quarry Park, where music was playing loudly from a large metal stage. Trustee VanDerHoeven stated that they needed documentation. Trustee Kable asked if there was a permit to build the stage, but there had been none. The stage is currently not standing.

Resident Sam VanDerHoeven stated that the road in front of his home may need gravel due to the high temperatures making the road sticky.

Zoning Inspector Kable mentioned that she got a call from Jett Ferm, who wants to develop property on Bancroft Road off Route 282. She talked about the open-space overlay plan and offered to discuss the plan with him. He has not contacted Kable yet. The Zoning Commission must approve the development, not the Board of Zoning Appeals (BZA). She emphasized that no progress has been made, yet.

Resident Mark Soeder asked about Isaac Mills purchasing a vacant property next door for a parking lot. According to Kable, the BZA had him sign a restrictive contract. Isaac Mills applied for the “no man’s triangle” area.

Closing Statements: Trustee Kortan made a motion to pay bills. Trustee VanDerHoeven seconded the motion. Kortan adjourned the meeting at 7:34. 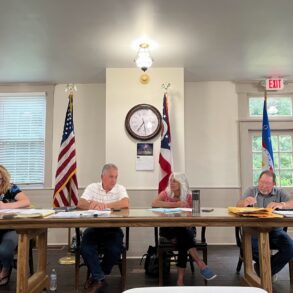 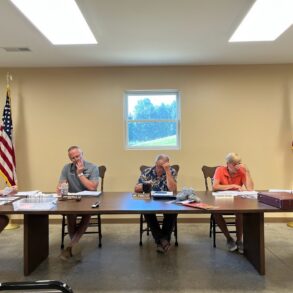 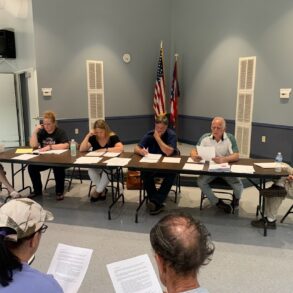 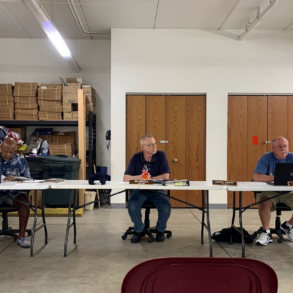