All about Balloon A-Fair 2022 and its newest balloonmeister 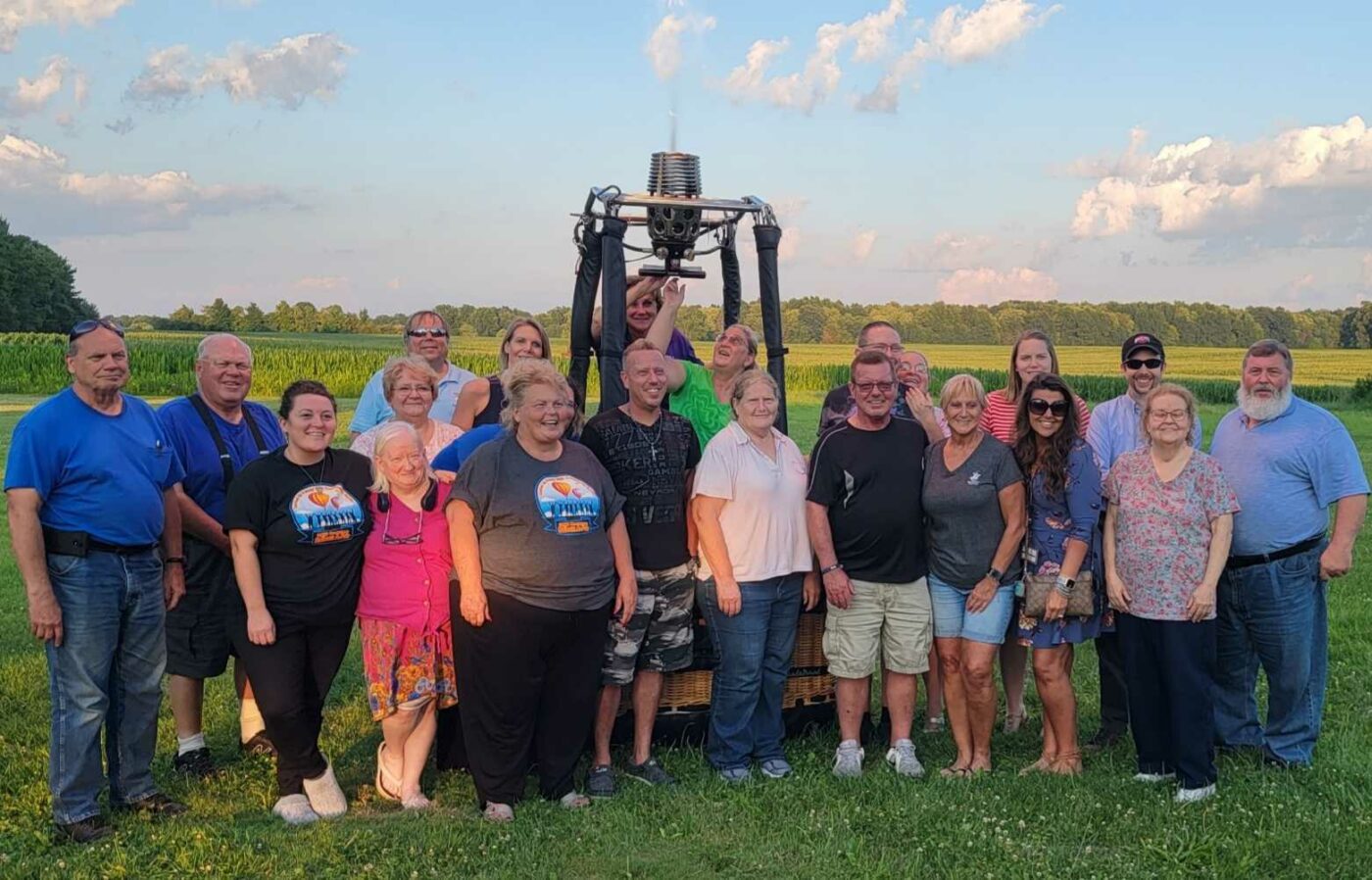 Paul Suttle, second to the left of the balloon, in glasses, is the Ravenna Balloon A-Fair's new balloonmeister. Submitted photo

Every hot air balloon rally — and Ravenna’s Balloon A-Fair is one one of them — is ruled by a balloonmeister: a person who coordinates all flight operations, working with a weather officer and a safety officer. The balloonmeister also communicates the flight mission to the balloonists.

Paul and his wife Penny Suttle have been active for decades in the Northeast Ohio Balloon Pilots Association and the Balloon Federation of America, serving in numerous leadership positions. Both have been flying for over 30 years.

Penny Suttle has been a balloonmeister since the early 1990s; Paul for the past five or six years. They’ve also officiated at the annual Albuquerque International Balloon Fiesta, which Suttle said is the biggest in the world.

As balloonmeisters, “We look at the weather, we coordinate with the FAA if we need to do that. If we need to work with any local airports, we’ll do that as well,” he said.

It’s no accident that the Balloon A-Fair’s launches are scheduled for late afternoon. Heat and wind gusts dissipate in the three hours before sunset, giving pilots their best shot at a successful flight.

Those winds constantly change, keeping balloonmeisters on their toes. A “no-go” call can change to a “go,” or vice versa. Decisions come down to the wire, even to minutes before a scheduled launch. As balloonmeister, Suttle notes all off-limits areas. It’s his job to anticipate where the balloons will be in a half hour or hour.

“I’ll make the go/no go decision,” he said. “You have to factor in weather, the flight direction — what if we’re flying over something that you can’t land in, like a lake?”

That would be Lake Rockwell, but a bigger caution is the former Ravenna Arsenal.

“The arsenal [now Camp James A. Garfield] is a giant area you can’t land in,” he said. “If you happen to have a wind that blows you right at the arsenal, you can’t really fly because there’s no place to land safely.”

Everything depends on wind direction, which is different at low altitudes than high, and on speed. In Ravenna, Suttle knows what winds he’s hoping for.

“North and especially south is just phenomenal,” he said. “The minute you get by Ravenna city limits, it just opens up, and it’s kind of flat. You can see, and you have plenty of opportunity to line up on launch sites.

“We have no steering,” Suttle said. “We have no ability to go to the right or to the left. When we take off, we become the wind, and if the wind is blowing in a southerly direction, that’s the way we go. When we take off we know generally where we’re going to go, but not specifically, and I won’t know where I’m going to land until I really get there,” he said.

Pilots holler down to landowners if they can, or seek a big field if they can’t. In 30 years, Suttle said he has only been refused twice.

To ensure a welcome landing party, Balloon A-Fair pilots continue a tradition begun in 1783, when two French brothers flew one of the first hot air balloons.

“When it landed, the townspeople shredded it because it was evil,” Suttle said. “They’d never seen something like that before, something floating in the sky, and it landed, and the people were scared to death of it.”

“So they decided the next time they flew, they would carry champagne with them and upon landing, they would open the champagne and spread it out to the landowners so they knew that they were the finest Frenchmen around.”

Traditions matter. Suttle ensures that each Balloon A-Fair Pilot is provided with a “thank you” bottle of champagne.

Balloonmeisters do not control when individual pilots lift off. All that is needed is enough space to climb and clear.

“If you can take off, and there’s nobody right above you, then it’s good for you to launch,” he said.

Balloon A-Fair 2022 is set for September 15-18. The event originally was a small celebration of the Oak Rubber Company, the world’s largest manufacturer of toy balloons from the 1930s to the 1950s.

Decades later, it has morphed into a days-long event that includes a children’s parade down Main Street, a community breakfast to honor businesses and citizens who have supported Balloon A-Fair, and a Saturday grand parade.

Balloon A-Fair will be held rain or shire, though weather will control hot air balloon launches and helicopter rides.

This year’s Balloon A-Fair will include a Friday evening “glow,” which Suttle said is like nothing else.

“The glow will be at sunset plus 20 minutes. The balloons will inflate on the field (at about 6 p.m.), and sit there, and then glow. When you see a 90,000-cubic foot light bulb light up, it’s rather spectacular. You just don’t see that,” he exclaimed.

Sunset plus 20 minutes means shortly before 8 p.m. Suttle encourages all attendees to arrive early as no delay is possible.

Saturday pilots will participate in what Suttle calls a “static,” where 12 pilots will inflate their balloons and launch, but others will remain on the ground, allowing people to come up and pose for up close and personal pictures.

Launches are scheduled for about 5:30 p.m. Saturday and Sunday, though the balloons begin inflating at about 4 p.m.

Daily admission to Sunbeau Valley Farm is $5 per person per day, though children 12 and under are admitted free with a paid adult.

For safety’s sake, working dogs are permitted, but guests must leave other pets at home, festival organizers say.

To round out Balloon A-Fair 2022, Main Street will be closed to traffic so attendees may enjoy games and activities at Children’s Alley, crafts booths, displays, food concessions, and live entertainment at three stages.

Again for safety’s sake, bicycles, skates, skateboards, are not permitted downtown or at Sunbeau Valley Farm during the festival.