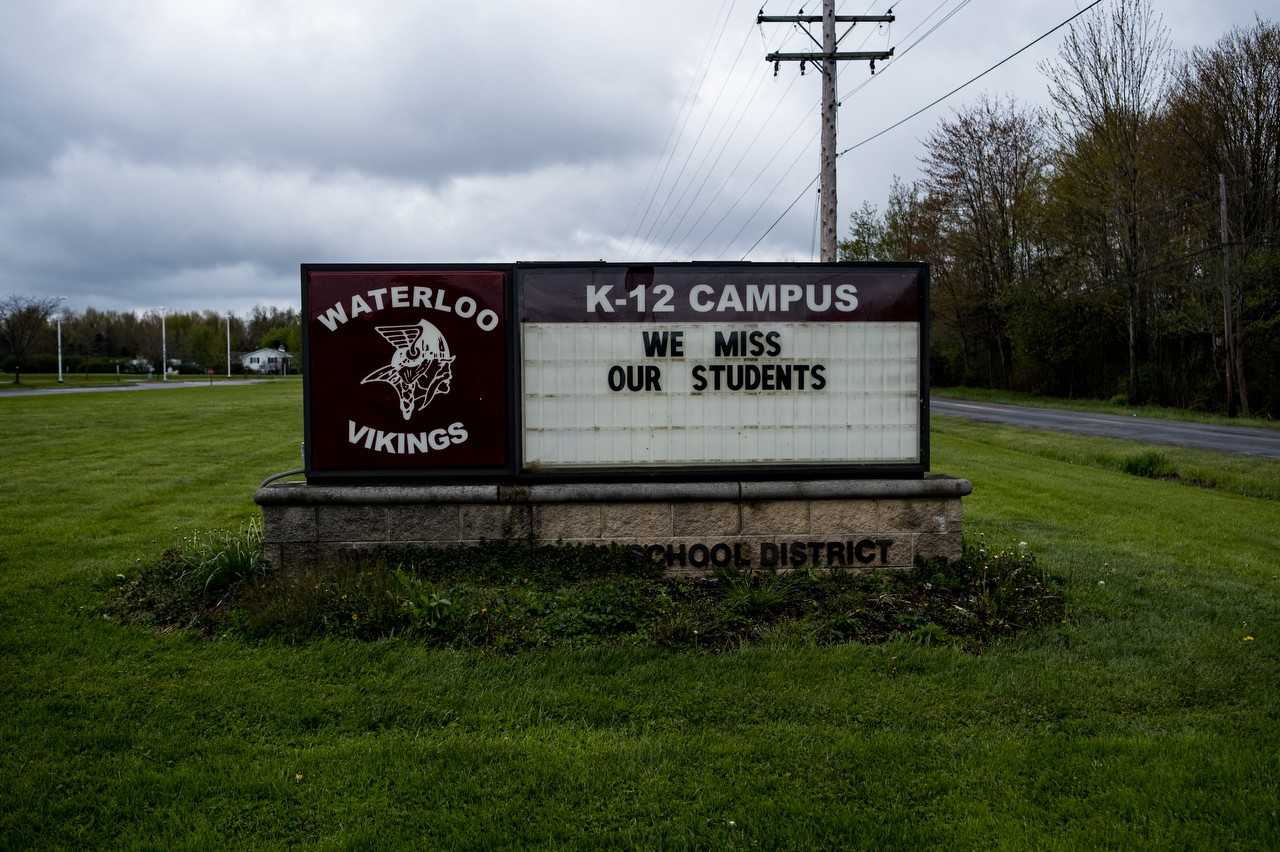 A sign reading “We miss our students” is seen on the front of Waterloo Local School District’s K-12 campus. Carter Eugene Adams/The Portager

ATWATER — Meaghan McIntosh is a lifelong resident of the Randolph-Atwater area. She’s a K-12 alumna of Waterloo Local School District, and so are her mom and her aunts, one of whom teaches seventh grade in the district.

McIntosh has fond memories from her time at Waterloo and is happy her son, now in second grade, attends the same school she did.

“This is home, and when I started my own family, I wanted them to have a similar school experience,” McIntosh said. “I wasn’t one of 600-plus students, and my teachers knew me by name. I wanted my son to be more than a number in school.”

Now, after years of budget cuts and failed levies, McIntosh worries her son won’t have the same opportunities she did in school.

In April, following an election day disrupted by a pandemic, Waterloo’s proposed earned income tax levy failed by 215 votes, with 982 in favor and 1,197 against. The initiative would have created a 1.5 percent traditional income tax, which excludes things like Social Security benefits and welfare. Waterloo hasn’t passed a levy in six years, said Todd Carpenter, the district’s treasurer.

The situation for the district is now dire. Waterloo has had to remove four teaching positions from the district, mostly those who teach humanities. While the district has tried to keep up with technology updates, it has been unable to keep up with updating other critical resources. Textbooks in the district are graffitied with the signatures of students who graduated over a decade ago.

Without job security, many teachers have moved to other districts in the hopes of career stability. Superintendent Shawn Braman describes this as a great loss for Waterloo and the students.

“I know for a fact that we’ve lost people who I would consider to be excellent teachers. We’ve lost them to other school districts here,” Braman said. “I see these people who could be here for 35 years and make an awesome impact on our children for generations, and now that’s not happening.”

The district’s only option is to try again by taking another measure to voters in November, this time a 1.5 percent earned income tax levy. Under that proposal, only earned income would be part of the levy, which would exclude other types of income, like capital gains or unemployment compensation.

This latest measure is an effort to keep the district out of the red and would not bring back teaching positions and some services lost to budget cuts.

As it stands, the district is one of four in “fiscal caution” with the State of Ohio. Fiscal caution is the result of a school district failing to meet certain budget and planning standards set by the Department of Education and Auditor of State. For Waterloo, that came after their five-year budget forecast showed them in the red.

Under the parameters of a fiscal emergency, a five-member commission is appointed to control the district’s finances. The commission is appointed by state and local government and includes representatives of the State Superintendent’s Office, local community members and business owners. The only way out of being in a fiscal emergency is for the district to be able to show a five year forecast of financial stability.

The opportunity cost of failed levies

Deciding which positions, if any, to bring back if the district eventually passes a levy will be a matter of practicality and cost. As it stands, Waterloo is down four teachers, including those who taught subjects in woodshop, choir and art.

“You know, when you’re bare bones education, offering the extras becomes an expense, and it’s an expense we can’t afford,” Braman said. “There are heavy implications with that, and ultimately our students suffer because of that.”

The concern over bringing back positions is long-term affordability. If a position is able to be funded for one year, bringing back that teacher and class, it does not mean the district will have the money to fund it the next year or the next five years.

All districts in the state have a report card through the Ohio Department of Education which measures a district’s performance in things such as graduation rate, student academic progress and how well a district prepares students for future opportunities after graduation. Cuts have also affected the district’s report card, which is based, in part, on what courses are offered, including AP, college prep and test prep. Overall, Waterloo has a “C” rating with the state and an “F” for student preparedness.

There’s evidence of budget shortfalls across every aspect of the school district, from staffing cuts to the buses. Prior to the levy vote, the district planned to refresh the aging fleet by replacing two of its older buses with one new and one used bus. That’s no longer an option, Carpenter said.

Busing for high school students has already been suspended, and the levy’s failure in April ensures it will stay that way. Students without drivers licenses or cars have to find a ride to school each day on their own.

“We have to operate as bare bones as possible because we don’t know if we’re going to pass something in November,” said Brian Pusateri, president of the Waterloo Board of Education.

Morale at Waterloo is low

For teachers in the district, the effect is demoralizing, said Jessica Horning, a seventh grade social studies teacher. Horning grew up in the area and went to school in the district where she’s been teaching for the last eight years.

“It does make it difficult to feel like you’re doing the best things for the kids, because again we always have to worry about the budget,” Horning said.

Horning, like teachers across the country, buys many of the materials used in her classroom with her own money. She regularly supplies notebooks, pens and markers to her students. For some, it’s one of their only means of getting school supplies.

For teachers in the district, supplies are not the only thing they’re now paying for out of pocket.

Daytime professional development for teachers and staff has been cut. While the district does have a contract with the Ohio Educational Service Center, which provides training, support and technical services throughout the region, the trainings offered are not always what teachers want or need.

“They do provide us certain things, but if there’s anything special you want to do, that might not fall into new standards or new government regulation,” Horning said. “We used to be able to ask for professional development, and that’s kind of really slowed down just for the sheer fact that we can’t afford it.”

Loss of educational experiences for students has been a continual issue for both students and teachers, Horning said. Field trips, some extracurriculars and clubs have all been cut from the district and will most likely remain cut for the foreseeable future.

The lack of diverse educational experiences combined with a lack of field trips makes educational social interaction difficult for some students in the district, and can affect performance in the classroom.

‘The school system will make do’

The community Waterloo serves comprises many small-scale farms, locally owned businesses and independent trade shops — most all of which have been affected by the coronavirus shutdown. As the response to the pandemic continues to leave thousands out of work, some in the community believe it’s not the right time for another levy.

Arguments against the levy vary widely, from “empty nesters” who refuse to pay for other people’s children to attend school to calls for the complete disbandment of the district. Many put the blame of needing the levy on the school district itself. There are also people in the community who support Waterloo but disagree with the timing and the price tag of the levy.

“At the end of the day it is still money out of our pockets that our community members just can’t afford right now. The school system will make do, as it did on the same budget last year,” said Derek Snyder, a small business owner and Atwater resident.

Snyder’s initial concern with the levy was over property being taxed but said whether or not the tax is on income or property, it’s still not the right time.

“As much as I want to see the community thrive, now is just not the right time to add even more financial strain,” Synder said. “We are an older community with a lot of our residents being of retired age or having adult children. We do not have children in the school, but do have family and friends with children in the school.”

On Monday, the Waterloo School Board passed a resolution for the November levy, which will now go to the Portage County Board of Elections to be placed on the ballot. 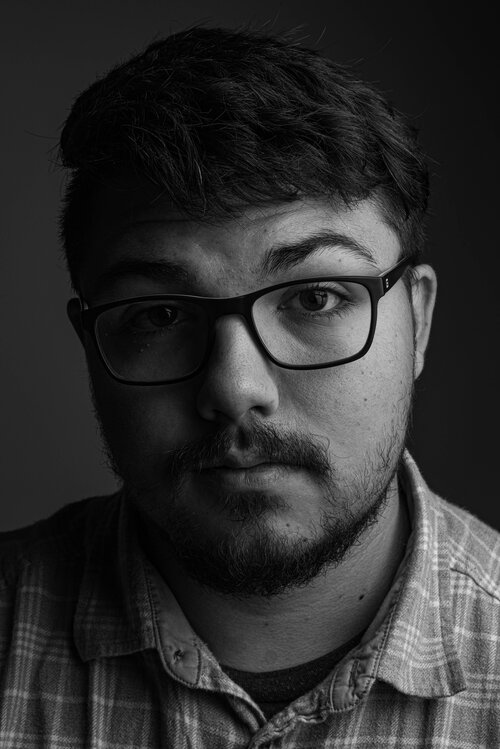 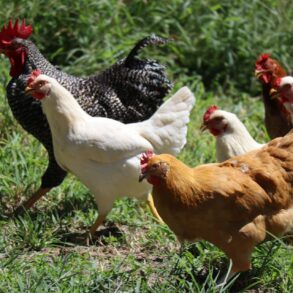 Atwater trustees say no chickens on lots smaller than an acre