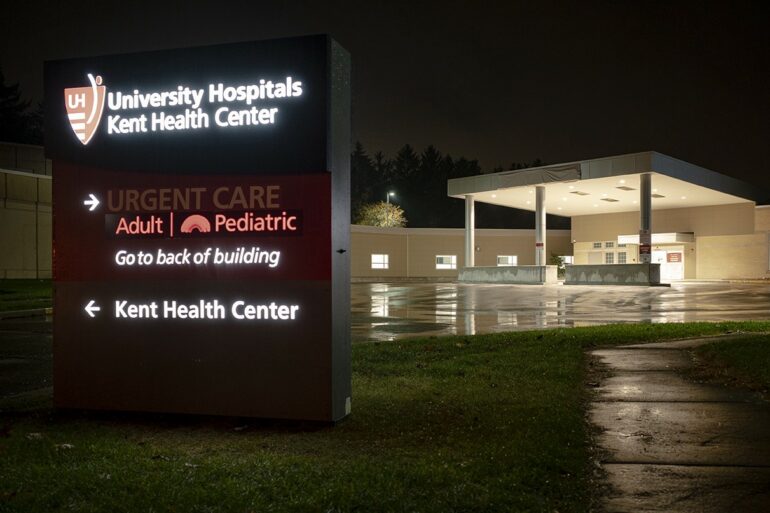 The ER near the corner of state routes 43 and 261 has been closed for over a year, forcing Kent’s first responders to speed to Ravenna each time they must transport patients. City leaders initially thought the closure was related to the pandemic but now believe that may not be the case.

“We have recently heard this emergency room may not reopen,” Ruller and Tosko wrote in a June 23 letter to Dr. Cliff Megerian, CEO of University Hospitals. “We find this information very discouraging and a setback to our EMS delivery system.”

“When the free-standing emergency room in Kent was open, our ambulances could transport there and respond to another emergency as soon as the patient was transferred,” they state. “This allows our department to operate more effectively for the health and well-being of the community.”

A statement from University Hospitals to The Portager indicated that the care conglomerate has opted to concentrate emergency services, and has no plans to reopen Kent’s facility. The statement notes that the urgent care facility will remain operational. Also still open are the medical offices, lab, and diagnostic imaging and radiology services.

“We will also monitor if service needs change in the community as the recovery from the Covid-19 pandemic progresses,” the hospital’s statement concluded.

“With an average of 13 calls per 24-hour shift and an average of eight hours of driving back and forth from the hospitals daily, the free-standing emergency room significantly impacts our EMS system’s ability to meet the community’s service needs,” they stated.

Though not a signatory to the letter, Kent Council Member Heidi Shaffer Bish supports the plea to reopen Kent’s ER.

Ideally, UH will reopen Kent’s ER, and will promote it more so both city residents and those in surrounding communities know it’s there.

“We’re not a big city, so maybe they don’t want to have a lot of down time for their staff. It’s not optional, it’s really necessary,” she said.

“It’s ridiculous,” Batian said. “I feel afraid of being in Kent now without an ER. I’m feeling like I live in the middle of nowhere.”