In honor of my first spring sports season with The Portager, I thought this was a good time for some lighter fare. So in that vein, let’s take a walk down memory lane and revisit some of the high — make that low — moments of my first year covering spring sports in Portage County for the Record-Courier.

The year was 1994. I was a mullet-maned, Soundgarden-jamming, 26-year-old cub reporter two years out of college looking to prove myself following my hire at the R-C a month earlier. I had plenty of journalism experience coming into the job, having written for The Buchtelite student newspaper at the University of Akron and serving four years as the sports editor at the Barberton Herald weekly newspaper.

But this was the big leagues: daily newspapers. In my home county, writing for my hometown paper. This was another level entirely and would require my best effort.

And my best effort, I gave. The results … well, read on.

One of my earliest assignments that April was covering an all-day softball tournament in Cuyahoga Falls. Several of our area teams were competing in the tourney, so it was a good opportunity to get coverage for a lot of schools at once and for me, as the new guy at the R-C, to get acquainted with our various head coaches.

What could go wrong?

The weather, for starters. It was a typical dreary April day in Northeast Ohio: windy, chilly and overcast, with the clouds seemingly about to let loose with rain at any moment. It wasn’t freezing cold, but it was just nippy enough that it had me spending quality time at the concession stand plying myself with hot chocolate and coffee to stay warm.

Predictably, the beverages had me also spending quality time in line for the port-o-pots. However, considering there were several of them available, the wait time was the least of my worries.

My biggest worry wasn’t immediately obvious, but it became painfully so soon enough: The port-o-pots were situated adjacent to the concession stand, which was doing brisk business on this particular day because of the dismal weather. On one trip to the toilet, upon entering I was dismayed to discover that the door didn’t have a lock on it. Only having two arms, I was forced to use one of them to try and hold the door closed while awkwardly … well, you know.

What wasn’t successful, however, was when I realized that two arms would be necessary for the conclusion, which forced me to let go of the door just for a few seconds. And as soon as I did, a gust of wind blew the door open and there I stood for all to see — including the Field High School softball team, which, to my extreme misfortune, had congregated in the concession area.

Luckily, I had gotten myself back together just in the nick of time to avoid even further embarrassment. Still, I had to take the walk of shame out of the port-o-pot and past the Falcons players on my way back to the fields, avoiding eye contact with anyone as I did so.

Finally, I was safely away from all witnesses. Or so I thought.

Not long after, Field coach Whitey Prunty approached me and asked if I would like to join him and the team for dinner after the tournament, with my meal on the house. I accepted his generous offer, at the same time wondering what cruel deity could subject a human being to so much embarrassment in so short a time. Because I would now have to sit and break bread with the same players who hours earlier had bore witness to my port-o-pot calamity.

Thankfully, the issue never came up at dinner, although my fear of it being raised at any moment prevented me from relaxing and enjoying the conversation. But upon telling my future wife about the incident later that day, she asked incredulously, “Why didn’t you just use a different port-o-pot?”

Stupidity has its price.

I didn’t have much luck with Field in spring 1994 — somewhat ironic, considering my mom was a graduate of Field High School and a standout athlete there.

My other faux pas involving the Falcons came when I was assigned to cover a baseball game at Field. It was a nice day, the sun was out, the birds were chirping … the frigid winter of 1994 seemed like a distant memory — distant enough that I felt confident, even just a couple weeks into April, leaving my coat in the closet as I headed out the door to cover the game.

When I arrived at the field, I immediately knew something was wrong. While I was dressed in blue jeans and a flimsy T-shirt, the fans in attendance were bundled up like they were going to a Browns game in December, complete with scarves, hats and gloves.

Wimps, I thought. Temperatures hovered in the mid-60s, but these people were acting like they were getting battered by icy winds whipping off Lake Erie.

I just shook my head, rolled my eyes and proceeded to sit back, bask in the sun’s rays and enjoy an afternoon of America’s pastime.

Because, by the start of the third inning, it began to get noticeably chillier. Then chillier became colder. Then colder became downright cold. The kind of cold that cuts right through you and gets into your bones, making your entire body feel like a block of ice.

It reached the point where I began to lose function of my motor skills. My frozen fingers were no longer capable of holding an ink pen, which meant I could no longer chart the game and keep stats. Which meant I was no longer actively covering the game.

As the sun dipped lower and lower in the sky behind me, and the shadows grew longer and longer around me, and the air got colder and colder with each passing minute, I realized why everyone sitting in the bleachers with me had come to the game dressed like they were heading out on an Arctic expedition: because sitting outside for hours in early April in Northeast Ohio is an Arctic expedition. And I had shown up like I was on my way to a beach party.

Just when my options were down to either going home or freezing to death, some gentle souls sitting around me, noticing my plight — and my red, frozen skin — started offering me some assistance in the form of extra winter gear they had brought with them. Gloves, hats, coats, blankets, I took whatever they offered and thanked them profusely. Not only did their generosity and compassion allow me to finish covering the game, they also might well have kept me from getting frostbite.

Later, as I graciously returned their belongings at the conclusion of the game, I was gently admonished by a woman who suggested that I check the weather report before covering events in the future.

I smiled and told her I would, but inside I knew that wouldn’t be necessary. For nearly the rest of my roving reporter days at the R-C, gloves and a spare jacket were staples in my car.

Because you never know when you’re heading out on your next Arctic expedition.

Sometimes, you never know who you’re going to run into when you are covering an event.

Take what happened to me at Mogadore’s Wildcat Invitational in April 1994, for example.

It was one of the first track and field invitationals I had covered, and it was an especially meaningful day for me since it was the first time I got to cover a sporting event at my alma mater. It was sure to be a big day in a lot of ways, but it became memorable for a reason that I could not possibly have foreseen.

High school track invitationals are difficult to cover, for a variety of reasons: There is a lot going on at once so it’s easy to miss something important, you spend much of your day breathlessly chasing down coaches and athletes for quotes, and meet managers often give up results to media members more grudgingly than the Kremlin gives up its secrets.

So as I battled gamely to keep up with the action, doing interviews and gathering information as I went, I waited for an opportunity to catch my breath and collect my thoughts on how best to put my story together. Finally, that chance arose and I took a few minutes to stand on the hill at Wildcat Stadium and simply watch a couple events on the track below me. It was a beautiful Saturday afternoon in the spring, and I was content to just soak in the atmosphere at my old stomping grounds.

Suddenly, my solitude was interrupted by a man wearing a black Garfield jacket. “Are you Tom Hardesty?” he inquired as he walked up to me.

Great, I thought, an angry parent or coach has managed to find me in the crowd. Nobody seeks you out by name unless they are displeased.

I swallowed hard and replied, “Yes, I am.” And waited for it.

The man smiled, stuck out his hand and said, “So am I!”

Turns out it was Tom Hardesty, the mayor of Garrettsville. During the course of our ensuing conversation, he informed me that my writing sports for the Record-Courier had created confusion among his constituents, some asking how he was able to work for the R-C and perform his mayoral duties at the same time.

I laughed and said that was fine as long as I didn’t get blamed for any bad policy decisions in Garrettsville.

It’s hard to believe it’s been 27 years since those halcyon days in ’94 — a longer period than I had been alive at the time. Since then, I’ve logged almost a quarter-century in sports journalism, watched Portage County athletic history unfold in front of my eyes and, perhaps most importantly, lost the mullet. But I do still jam to Soundgarden. Some things, after all, are timeless.

Subscribe to Portager Sports to get Hardesty’s column and local sports updates in your inbox every Tuesday. 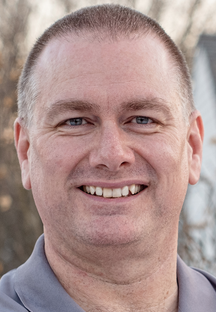 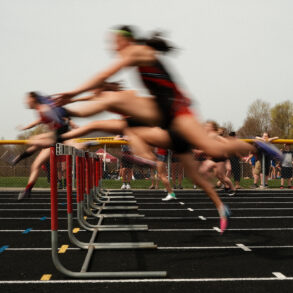 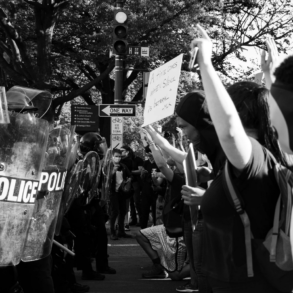 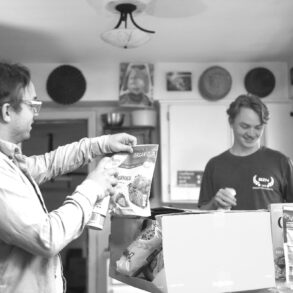