Kent’s town and gown leadership are solidifying plans for an outdoor ice rink slated to open in downtown Kent this winter.

City Council unanimously approved a special event application partnering with Kent State for a 40-feet-by-70-feet rink on Erie Street between the Kent State hotel and the PARTA parking deck. To make it all happen, Erie Street will be closed from Oct. 15 until March 1. The rink itself will be open from Nov. 24 through Feb. 28.

Kent State is working with Ice Rink Events of Ohio to prepare a foundation for the rink, and is installing new power service to keep the ice… icy. That upgraded service will be permanent, allowing the city to potentially use it for events year round, said Doug Pearson, Kent State Associate VP of Facilities and Operations

“Pine trees are going to be donated from Davey Tree, and we’re going to set them in planters and decorate them like Christmas trees,” Pearson said. “We have six of those that we’re going to place around the rink for decorations.”

Kent State will manage the rink, including staffing skate rentals and maintaining the ice. Though Kent City Council members have enthusiastically volunteered to drive the Zamboni, that job will also be assigned to a student employee, Pearson said.

Plans are for the rink to be open from 10 a.m. to 8 p.m. Wednesday through Sunday. Security, both during operational hours and when the rink is not in use, is still under discussion. Pearson said he hopes to have a security plan in place by mid-September.

“In addition, we are installing a camera to watch the rink 24/7,” he said.

Other details, such as entrance fees and Covid protocols, are also undetermined. Health guidance is constantly evolving.

“We’re full speed ahead, and we expect it to open on Nov. 24,” Pearson said, adding that the original date was Nov. 25, but they wanted to open the day before Thanksgiving. “We’re excited about the event. It’s in partnership between Kent State University and the city of Kent, and it will provide student recreational activities and jobs, and people to downtown Kent.”

The holiday ice rink, as Kent City Council calls it, was the idea of Kent State President Todd Diacon, who saw similar installations, and viewed them as a positive student activity and a way to bring people downtown.

“It started a year and a half ago, and we had made plans a year ago, and then Covid hit hard, and then we postponed till this year, and this is the year we’re going to try to make it happen,” Pearson said. 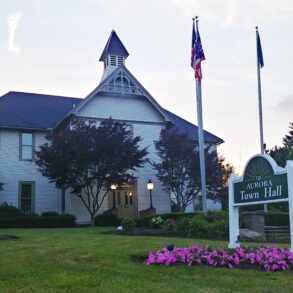