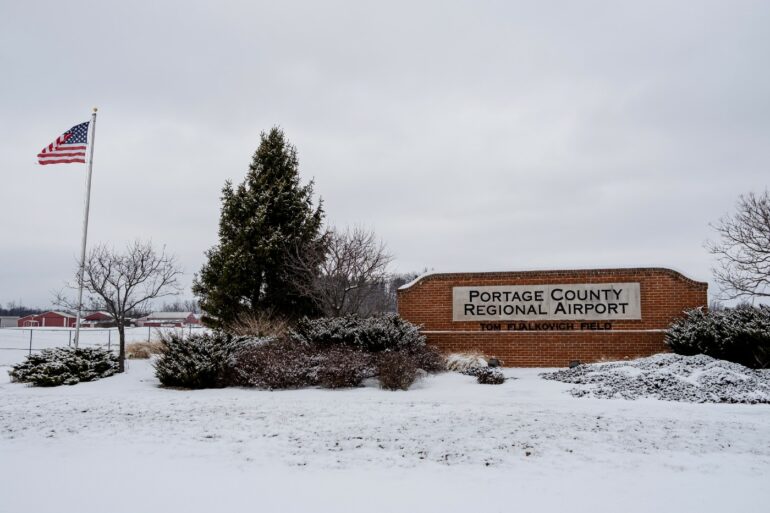 The Portage County Board of Commissioners is considering a plan to take over the county airport. Michael Indriolo/The Portager

Portage County commissioners approved a proposal from Aviation Management Consulting Group for up to $111,500 to help determine the future of the debt-ridden Portage County Regional Airport.

The firm is tasked with evaluating the airport’s management structure and staffing needs, and outlining the county’s options, which might involve transferring management from the airport’s board of trustees to the county government.

“This is to determine what action we’re going to take towards the airport,” Commissioner Sabrina Christian-Bennett said. “What is the best use of the airport? What is the future of the airport, and what would the airport look like if we were to take it over? This is like our exploratory phase.”

The airport has over half a million dollars in debt and no plans to increase revenue. It has also received grants from the Federal Aviation Administration that would have to be repaid to the government if the airport shut down.

Though local residents have opposed expanding the facility, all options are on the table, Christian-Bennett said.

Leaving the airport as it is — and aiming for nothing more than financial sustainability — is one of those options. But supporters of the airport, including its current leadership, would like to see the county develop it into an economic asset.

“That airport has the potential to be a huge economic driver for us, especially for what’s going on there by the turnpike with the Geis property,” Christian-Bennett said.

Geis Companies, based in Streetsboro, is developing some 470 acres just north of the Ohio Turnpike near the Shalersville interchange. Ten buildings totalling 7,345,000 square feet will transform the area from farmland to a major industrial hub.

Expansion or not, the county has access to resources that the Portage County Regional Airport Authority does not.

“We can apply for certain grants with the FAA at a larger scale,” Christian-Bennett said. “A lot of those grants are match grants, and they don’t even have match grant funds.”

Based in Centennial, Colorado, with offices in Missouri, California, and Florida, AMCG bills itself as a leading provider of aviation management consulting services, support and resources.

Its three founders and lead consultants have a combined 80 years of experience in aviation planning, development, operations, management and consulting, according to the company.

AMCG will have 10 months from its first site visit to complete its work, according to the agreement.

In March 2022, the last month for which Portage County Regional Airport Authority minutes are posted, Secretary/Treasurer Karen Stacko reported $30,195 in the airport’s general fund and $337.74 in its FAA/ODOT report as of February 2022. That included a $37,595 balance as of the first of the year, $67,894 in grant revenue, and $105,151 in grant expenditures, the report states.

There are more expenses on the horizon, none of which the airport authority can afford. The airport needs to improve its taxiways, which haven’t been paved in over a decade, at an estimated $500,000 price tag, President Homer Lucas said.

Far from facing that expense, the airport authority is focusing on financing daily operations, he said.

County commissioners created the airport in the 1960s and appointed an eight-member board of trustees to govern the facility.

The airport authority employs a part-time groundskeeper and a secretary/treasurer. It is also in the midst of a 50-year airport management agreement and a fixed base operator services agreement with Portage Flight Center, which is tasked with providing daily airport management services year-round from 8 a.m. to sunset.

The Portage Flight Center owner is Richard Bonner, who  provides all flight line and fuel services for planes based at the airport or just passing through.

Even though a county takeover would put Bonner out of business as the airport’s fixed base operator, he supports it.

“I’ve been dealing with the airport board for the last 25 years,” he said. “The airport board has no money, no authority, they can’t expand the airport. They’re in a box. So let the county take it over, and they can figure out what to do with it.”

County control translates to the commissioners supporting the airport for the first time in 25 years, he said, stressing that past county administrations are responsible for the airport’s current financial condition.

“The commissioners are doing the right thing by disbanding the board and taking over the management of the airport themselves, and maybe then they’ll understand what’s going on there,” he said, referring to a plan that has not been formally decided. “They do understand it, that’s why they’re doing what they’re doing.”

If his new bosses agree, Portage Flight Center would remain on airport premises as a lessee, just not as the facility’s fixed base operator, he said.

“They are going to take over the FBO. That’s the whole idea. The county needs to take it back,” he said.

Lucas sees county control as a move in the right direction. The board, he said, may remain as advisers, or may dissolve altogether.

“They’re looking at a different organization,” Lucas said. “Instead of Portage Flight Center being the manager of the airport, Dick Bonner, it would be the county, and the county would hire someone to manage the airport.”

The manager would shoulder “some of the work the board does now,” including overseeing daily operations, he said.

“It really puts a direction to it that would benefit the county instead of it being a little bit fragmented as it is now, with Portage Flight Center and the airport board both trying to pitch in to operate things,” Lucas said.