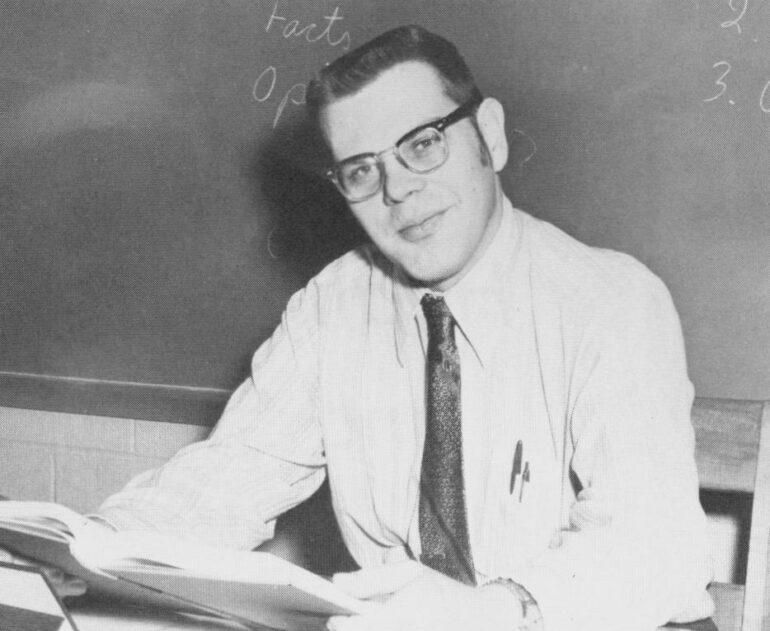 An image of Bob Corbett teaching in 1972. Submitted photo

“We were surprised at the amount,” Shalersville Fiscal Officer Jill Corbett said. “We had no idea.” (Jill Corbett’s husband is Clyde “Jim” Corbett, a first cousin of Bob Corbett.)

The school board will determine what to do with the unexpected windfall, but Toth has no doubt at least some of the largesse will be steered to sports.

“I know they want to recognize him. That was an amazing donation,” Toth said.

Bob Corbett, who graduated from Crestwood High School in 1960, taught history, geography, economics and English at Southeast High School from 1967 to 1970, then returned to his alma mater to complete his career in 1988.

“He was my teacher at Crestwood High School,” Shalersville Trustee Frank Ruehr said. “I had him my freshman year.”

It didn’t take long for the class to learn that Corbett’s passion was sports, especially baseball. Lessons were sometimes sidelined by conversations about Cleveland’s — and Crestwood’s — boys of summer, but Corbett was a professional. Soon enough, the banter stopped, and class would begin again, Ruehr recalled.

First cousin Ray Corbett also remembers Bob Corbett’s passion for sports. A childhood bout with rheumatic fever left him unable to participate in games, but he would follow his beloved Cleveland teams on radio and TV. He knew his stats.

“You could ask him about any of the Indians players, and he could tell you everything about them,” Ray Corbett recalled.

It is unclear when Bob Corbett found time to indulge in his second passion, writing, but dabble he did. Though first cousin Ray Corbett does not believe his cousin’s short stories were ever published, he had heard they existed and wishes he could see them now.

What does exist is Bob’s handwritten history of the United States from Jefferson and Franklin through the Obama years, a tome measuring three inches thick. Jill Corbett and her husband are keeping it safe for the time being.

The bequest caught all the trustees off-guard, all the more so since Corbett never lived extravagantly.

To honor Corbett, the trustees plan to install “something sports-related at Shalersville Township Park,” he said.

Kotkowski, who ran into Corbett at Shalersville school alumni meetings, remembers him as a quiet man who was easy to talk to.

“He was just an upbeat, super nice guy, a very simple man,” Kotkowski said. “I don’t think he spent a lot on himself.”

“He was genuinely a nice person, just genuinely nice and caring. He always had time for you, always had a story. He was just a pleasant fellow,” Ruehr said.

America’s involvement in the Vietnam War put the dreams of many young men on hold. Though Bob Corbett was unable to serve, Ray did. He remembers coming home on emergency leave, only to find himself in front of Bob’s class, telling them about his experiences. Real-time history from a primary source. Teaching does not get any more relevant than that.

“His passion was to educate people and to just live a happy life no matter what,” Ray Corbett said. “He wasn’t depressed. He was always a happy-go-lucky guy.”

Besides teaching, Bob Corbett also worked in his father’s Shalersville plant nursery. He eventually took ownership of the business, then sold part of the property to a gravel company and part to a golf course developer, Ray Corbett said.

That left teaching and sports, Bob’s true passions. Not only did Bob coach high school sports, he also served as a scout, attending other schools’ games to identify their standouts.

Bob left formal education when his arthritis began to impact his job performance. Even so, he never lost his love for teaching.

“He had a couple nieces in California,” Ray Corbett recalled. “They were home-schooled, and he gave them all their history lessons. He would write them out and send them. It was something he did, and he felt great because he was helping somebody.”

Ray, Bob and the rest of the family would gather every couple months, usually to catch up at a local restaurant.

“There’s a lot of kids that we’d run into at a restaurant, and his students would come up to him and say hi to him and tell him how much they appreciated him when he was in school, being their teacher. That’s a big thing for anyone. If all your students can remember you and have good things to say about you, that’s great,” Ray Corbett said.

“When we used to go out to eat, silverware was too heavy for him to handle. He carried his own plastic silverware,” Ray Corbett said. “He never got married, he knew how to take care of himself. He wanted to be independent. He was proud to be that way, he really was.”

In time, the work-arounds weren’t enough. Bob Corbett spent his last few years in assisted living before dying at age 78. He is buried at Riverside Cemetery in Shalersville.