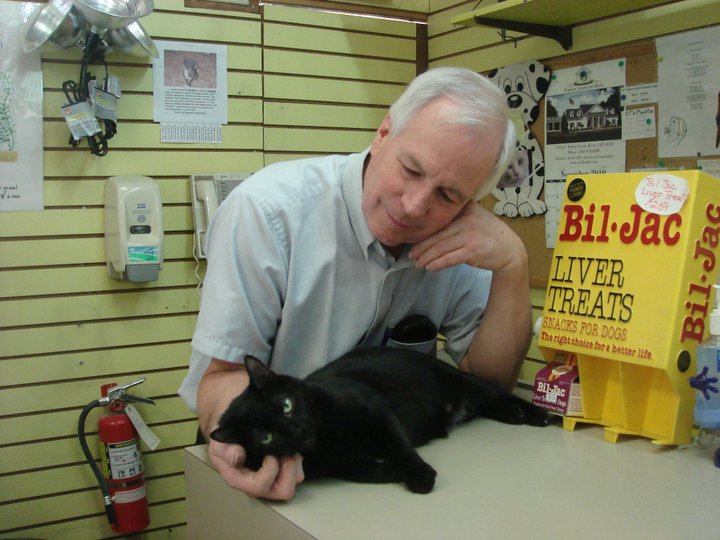 Exactly 51 years from the day it opened, Kent’s Hutch Pet Shop will close its doors for the final time Sept. 15.

“We know we’re mortal,” said Pat Flanigan, who owns the store with his wife, Danita. “We knew we were going to close, and we decided that 51 years was a good time. So we’re going to go forward. We have grandchildren in Minnesota and one around here. We’d like to spend more time with them, and we’re going to change gears a little bit.”

Hutch Pet Shop got its start in 1971, but Pat Flanigan’s fascination with fish started much earlier.

“When I was 8 years old, I talked my mother into going to a place and buying a second-hand, 10-gallon setup, and I earned my money by mowing lawns. It’s been fish ever since, off and on,” he said.

The store’s original location was at 149 S. Water St., now the site of The Image Consultants. The Flanigans stayed on Water Street for nine months before realizing the space was too small. (The next tenant was Paul Braden, who opened a tiny instrument repair shop. That business has since morphed into Woodsy’s Music, another Kent icon.)

In 1972, the Flanigans relocated to 103 Lake St., just at the point where Lake Street and Crain Avenue meet. They’ve been there ever since, providing generations of pet enthusiasts with any number of fish, reptiles, rodents and birds.

Hutch Pet Shop is, and always was, a family-run business, but it wasn’t the only one.

“We had some friends who lived in Bowling Green, and there was a store there called Hutch Pet Shop, and he was franchising,” Danita Flanigan said. “We talked about it, and it cost $500 and we decided to open the store and did it ever since.”

A second person also bought a franchise and opened a Hutch Pet Shop in Findlay, Ohio. It has since closed, as did a short-lived Hutch Pet Shop the Flanigans opened in Stow in 1989. That one folded in 1994 when the shopping plaza that housed it transitioned from retail to service storefronts. The lack of foot traffic was devastating, Pat Flanigan said.

The Kent store thrived. Pat and Danita are especially proud of their kitten rescue program, which over the decades provided customers with over 11,500 pets.

“We’re getting people whose kids are coming in to get a kitten for their kids now because they came when they were little and now they’re married,” Danita said. “All the kittens were rescued. [We] never paid anybody for them. We have empty cages, and usually it’s in the winter, and somebody always calls whose cats snuck out and got pregnant in the winter.”

Some ended up becoming store cats, which were a constant at Hutch Pet Shop.

“We’re going to miss the kitten rescue,” Pat said. “I think we really made a big impact in this area on that. We’re cat foster parents to 11,500 cats.”

Fish were always the primary focus. Some they imported from Florida; others came all the way from California.

“We’ve had a lot of strange fish. We had that freshwater lionfish. It had poison spines if you stepped on it. I think we only had one of those. It was so ugly, we didn’t get any more,” Pat recalled. “And early on, we had people that came in, they were asking for gold piranhas, the ones you had to ship in a coffee can because they would bite everything else up. That was a rarity. They come from Argentina. We never had any. We had regular piranhas, but gold piranhas are extremely aggressive.

“We tried to stay away from stuff that was actually truly harmful to our customers, and we always warn the people with regular piranhas: Always use the net against them because they’re such frightened creatures. They’d run into your hand and they would bite you if they’re scared.”

Danita recalls people asking for lions and tigers, none of which were possible — or legal. But Hutch Pet Shop was home to a monkey for eight or nine years, courtesy of a person who couldn’t care for it anymore. Never for sale, it joined the ranks of Hutch’s resident store pets.

“It needed a home, so we gave in. They require a lot of care, monkeys do,” Danita said. “It was in a cage, and it would come out and sit on your shoulder.”

The pair took pleasure in teaching customers what animal husbandry really means. Customers may have come in by chance, but they returned out of loyalty and respect for the Flanigans’ knowledge and ethics.

“They weren’t merchandise — unlike a bookstore, you know, where you put something on the shelf and walk away and come back a week later and it’s still in the same place, maybe a little dust on it or something,” Pat said.

Customers responded and returned year after year, eventually bringing their own children.

But big box stores changed everything, and not necessarily for the better.

“When the big box stores started opening, well, they don’t know what they’re doing, so we used to get a lot of people that had trouble with their animals or fish. Compared to everyone else, we have a lot of knowledge,” Danita said. “When we’re gone, people are going to have a hard time finding out all the stuff we know.”

The couple intend to stay in their home above the store and put the space to good use.

“I’m a watercolor painter, and I’ve got a pretty good knowledge of that,” Pat said. “I’m going to offer classes out to the general public, and I’m also going to try and court some of the fashion design students, if they care to come here and take lessons on equipment, on watercolor, circumstances, how to use it to their best advantage, what they need. [Watercolors] is the industry standard for fashion design.”

Where Hutch customers will go is anyone’s guess. Pat couldn’t think of another company that could replace what they do in the community.

Until the store closes, the Flanigans are busy ensuring their animals will go to trusted homes or to a local wholesaler. In the meantime, they’re selling what they can, even offering a dirty-tank sale.