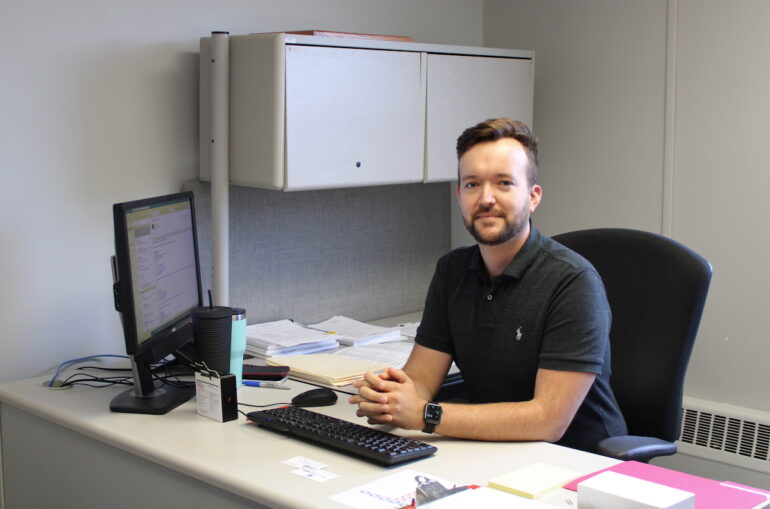 Portage County’s new director of budget and financial management as of June 1, Joe Harris, discovered he had a knack for working with money early — when he and his brother spent visits with his grandmother playing blackjack.

“We didn’t play with money, obviously, because I was 6,” he said, laughing. “But it was always blackjack, and I had to count it all myself. I think that’s where I got my quick counting skills.”

Harris grew up in Brimfield, the son of a nurse and a contractor, and attended Field. For college, he studied at the University of Akron, double majoring in finance and international business with a minor in Spanish.

During undergrad, he lived and studied in Lima, the capital of Peru, for a year. During that time, he realized “there’s more to the world than the States.”

“My mind was blown,” Harris said, describing an adventure that included traveling to Machu Picchu and the Bolivian sand dunes and learning how to navigate a new city, negotiating fares for a taxi and chatting with the locals.

“The world is very small,” he said. “I always thought the world was massive, but it’s not.”

After graduating college in 2015, Harris worked as an auditor before becoming the assistant finance director of the City of Barberton, a job he held for three years that taught him government finance.

“I learned a lot there. It built a solid foundation for me to move on to the next level,” he said.

The difference between working for a city government versus a county government, he said, is the scale. In Barberton, half of his job was auditing. In Portage County, the auditor’s office takes care of that, freeing up Harris to do “the part that I love: budgeting, forecasting and looking ahead to the future to see what we can afford.”

Harris knew he wanted to specialize in those areas, so that’s what he focused on when he returned to the University of Akron to earn his MBA, which he completed in 2019. Harris now lives in West Akron.

Since he was 13, Harris dreamed of working in government — though at that point, he’d “had a wild imagination” and hoped to end up in the CIA or secret service.

“There’s a lot of aspects of government that can make a big difference” in residents’ lives, Harris said. Government can play a part, for instance, in “revitalizing an economy or an area.”

Harris’s goal in the coming months is to ensure “taxpayers’ money is being spent fairly and being spent between the different departments the way it should” by streamlining the budgeting process to make it easier for employees to understand.

“I’m not saying anything’s wrong” with the budget process that is currently in place, he said. “But just like with technology, everything can be upgraded … whether it be the process, procedures or software.” And keeping good records and supporting documents is key, he said.

Harris credits his family for helping him get to this point in his career, from humble beginnings working retail in department stores.