Kreiner: ‘I cannot imagine the pressure put on some Olympians’ 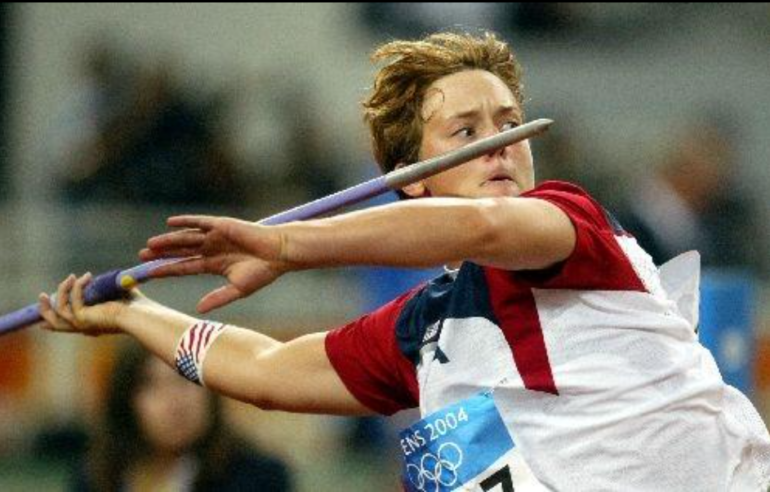 This is the second part of a two-part series about Kim Kreiner. You can read the first installment here.

Kim Kreiner thought she had been through it all in her track and field career.

But nothing could have prepared the Mogadore High School and Kent State University graduate for her first Summer Olympics in Athens in 2004.

“Walking behind that American flag and marching into the stadium for Opening Ceremonies … there is nothing else like representing your country at the biggest competition. Goosebumps,” she said. “And to hear the announcers say ‘the United States of America’ when you come out of that tunnel entrance, there really is no way to best describe it.”

Kreiner represented the United States in the Olympic javelin competition twice, in Athens in 2004 and Beijing in 2008. She had seen all the pomp and circumstance of the Olympic Games many times before on television, but actually being part of it gave her a unique perspective on something few will ever experience:

What it’s like to be an Olympian. And those memories came rushing back as she watched the 2020 Tokyo Olympics this summer.

“I know people watch the Opening Ceremonies and get all excited for the Parade of Nations and wait with anticipation for the USA to come out of that tunnel, then start cheering with excitement. Multiply that by a billion, and that doesn’t even come close to the experience of actually walking in that Parade of Nations,” she said. “I will never forget any of those moments or any of the moments in between. Those are once-in-a-lifetime chances. I know people are probably saying, ‘yeah, but you went twice,’ but each time is a completely different set of experiences. Different places, people, cultures, teammates, competitors, and each one of those things makes each experience different and unique.”

Kreiner was state runner-up in the shot put and discus as a senior at Mogadore in 1995, then won the MAC title in the javelin at Kent State in 1998. But she was just getting warmed up.

She won the USA Outdoors title in 2001, set the American record in the javelin in 2002, captured the gold medal at the Pan Am Games in 2003, and won the U.S. Olympic Trials in 2004 ahead of the Athens Games.

So Kreiner had long since established her dominance in the javelin heading into the 2004 Summer Olympics. But upon arriving in Greece, she quickly discovered that
the Olympics weren’t just about experiencing competition against the best in the world. They were also about experiencing … the world.

“Both Olympic experiences were unique in their way,” she said. “Athens, the birthplace of the Olympics, I am not even sure I can put into words. To go over and see all the Greek architecture and culture was just a goosebump-type experience. To think of all the history behind every building, behind every statue, behind every painting was awe-inspiring. Being able to go and visit the Acropolis was something I will never forget. I mean, normally you only see those types of things in books or as pictures.”

Four years later, Kreiner was in China for her second Olympics. And once again, she was immersed in an ancient civilization.

“Beijing had its own culture and way about it,” she said. “The Olympics were not the first time I had been to Beijing, so I had already been to the Great Wall and other spots. So in Beijing, I chose to walk around the (Olympic) village and take in how each country decorated their apartment buildings and areas which they occupied for the two weeks. Each country took great pride in the section of the village that they were staying. You could definitely tell where Great Britain was staying when you turned the corner and saw the Union Jack hanging on all the balconies. Same would go for most every country; you could tell who was where by what flag was hanging from a building’s balconies. I also was nursing that foot injury [suffered prior to the Trials], so I didn’t want to do too much walking. I wanted to save that foot for the competition. I also got to ride around the parts of the city that were surrounding the Olympic village.

“Both Athens and Beijing were outstanding hosts. The people were extremely friendly and helped any way they could. Seeing as I did not speak either of the native languages, I needed some help at times.”

To reach that unforgettable point in her career and life meant sacrificing beyond her wildest imagination.

“Being an Olympian does mean having a certain mentality associated with it,” Kreiner said. “Not everyone has what it takes to pour their heart and soul into a sport in order to make an Olympic Team. You need to have a certain level of confidence in yourself and your abilities. You need to be flexible in the way you approach things and be able to roll with the punches. If an injury happens, you need to be able to adjust your training as well as be mentally tough enough to handle and recover from that injury. If for some reason that day of training doesn’t go as planned, you need to be able to adjust mentally and physically.

“For me, I also had to figure out a way to handle not being around my family. My family lives in Ohio, and for most of my career I did not. So I would only see them for maybe about one month out of the year — two weeks in the summer and two weeks for Christmas.”

All of which can make for a solitary existence for an Olympic hopeful — an existence fraught with pressure and expectations.

“When I made both Olympic teams, there was no outside pressure to perform at a certain level; all the pressure came internally,” Kreiner said. “I cannot imagine the pressure put on some Olympians when they are billed as the face of the Games or sport. I do not want to even attempt to describe what they go through, how they feel, or how they handle it because I have never experienced it. I do think there are some things that could change or be done a little differently that may help reduce the pressures on an athlete, but every athlete is different and handles pressure differently, so I believe each situation is as unique as the person. I don’t think you can handle every pressure situation the same for each person.

“Mental tools are different for each person, just like their physical tools are different. My style of training and throwing the javelin was different from my competitors, and I can guarantee that the way we handle pressure situations differed as well. If you make it to the Olympic stage, it is all about being able to compete.”

Doubt, too, can creep into an Olympian’s psyche.

“I can tell you the first time I made a USA team, not the Olympics, I was standing in an elevator with some big-name athletes who I was used to watching on TV,” Kreiner said. “I was thinking to myself, ‘No way I belong here at this meet,’ but as I continued to train and gain more confidence, that thought never entered my mind again. That was the one and only time it crept into my head. I worked hard enough in training physically and mentally that I never wanted to have that thought again.”

Kreiner, of course, wasn’t alone in combating — and overcoming — those fears.

“To get to compete against the best in the world is amazing,” she said. “When you make it on a USA team, especially the Olympics, you know you are in very elite company. And yes, it can be intimidating. Athletes need to learn how to handle that situation, and most if not all have some sort of routine or have done some sort of preparation on how to handle that situation.

“Watching the Olympics on TV, you may not see how each athlete handles it, but trust me, it’s there. Whether it’s listening to a certain type of music on the bus or warming up, doing mental visualization, guided imagery, positive self talk, etc., we all do something to help us relax and handle pressure situations.”

These days, Kreiner is a world away from Athens and Beijing — in every sense. A biology and education major at Kent State (class of 2000), Kreiner serves as a teacher and track coach at Mogadore — back where it all started.

“I do not do as much as I used to athletically, but I do try to stay pretty active to stay in shape,” she said. “The pounding my body went through during those 12 years, I try to take it easy and remember I am no longer a professional athlete and don’t need to be lifting heavy weights anymore. But trust me, I still lift.”

Of course she does. Because while the pace has slowed in Kreiner’s life, the Olympic flame still burns deep inside — and always will. After all, Olympians share a special kinship of being part of a select few to have experienced the pinnacle of sport and the unforgettable moments and lessons that come with it.

“The important thing in life is not the triumph, but the fight; the essential thing is not to have won, but to have fought well,” Kreiner said. “Let the athletes enjoy the experience, let them compete as best they can, let them focus on their process, because who knows if they will make another Olympic Team.”

Hardesty: How I’m spending my Thanksgiving this year

Hardesty: Sports gaffes that give me high blood pressure