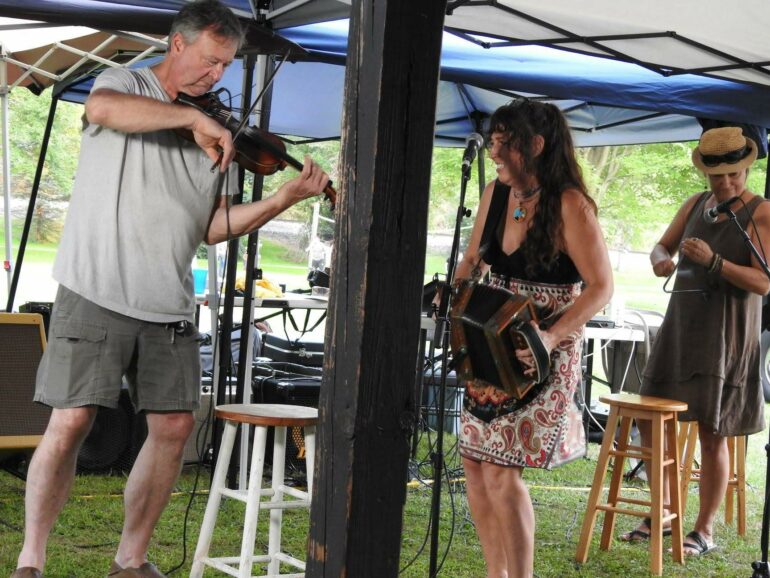 About 175 musicians and friends of Rockin’ Robin Montgomery gathered at Kent’s Plum Creek Park on Sunday for a celebration of life to honor a great musician gone too soon.

Attendees enjoyed a potluck dinner and musical tribute as many of Northeast Ohio’s finest musicians sent heartfelt notes to Robin, who they said surely must be listening.

A lifelong Kent resident, Robin was a noted blues musician who played and recorded with artists across the region. His honky tonk blues piano sound was instantly recognizable to a legion of fans and friends.

A photo montage featuring Robin and many of his fellow musicians was accompanied by “Robin Ain’t Here No More,” a tailor-made tribute written by the Spyder Stompers, Jack DiAlesandro and Kevin Richards. The video, available on YouTube, features Ray DeForest on acoustic bass, Ray Flanagan on harmony vocals, Roy King on percussion, Meredith Pangrace on accordion, and Kevin Richards on guitar and vocals

Many of the musicians shared memories of Robin, who had a legendary memory of all things and all people related to music. He is buried with his parents in Kent’s Standing Rock Cemetery.

A program printed for what was termed “Robin’s Day” provided a fitting epitaph: “A generous man. A gifted musician. A positive man. A man of his word. A friend to many.”

Robin was all that, and more. Rest easy, old friend.