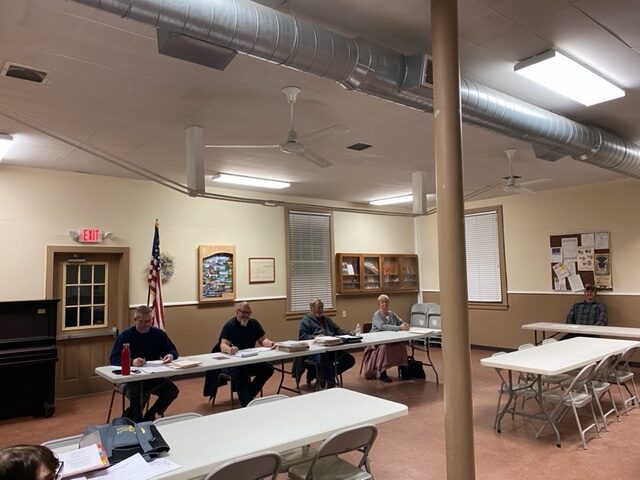 (Documenter’s note: Documenter arrived 22 minutes late. The first portion of these notes has been completed with help from Fiscal Officer Kevin Cihan.)

The Nelson Township trustees meeting was called to order and began with the Pledge of Allegiance at 7 p.m. Minutes from the Jan. 4 meeting were accepted. Financials, including bills and wages, were presented and accepted.

Sandy Huzl (not present) submitted a written report for the Community House. The report was reviewed.

Kable reported issuing new building permits to Daniel Miller of Reynolds Road and Aaron Miller of Bloom Road. On Jan. 16, the zoning board met to discuss an area variance sought by Mahlon Byler. The variance was unanimously granted by the board. Kable additionally reported on that BZA organizational meeting, stating that Cheryl Miller remains chair and Susan Mason vice chair. Wally Kurtz was also granted a permit for an addition on Kyle Road. Kurtz has been cleaning up a distressed property. Two other blighted properties were discussed without noting their locations.

Road Supervisor Chuck Vanek reported on road conditions following a lengthy roundtable conversation about titling and willing plots in Nelson Cemetery, sparked by the inquiry of a relative of a deceased community member who did not include his burial plot in his will. Vanek suggested the township add gates to a property identified as “by the creek on Pierce Road … by Tom Conway’s trailer.” According to Vanek, there is no access for emergency vehicles. He suggested adding the gates around a pastured area “at the driveway and two at the railroad bed” at the township’s expense, estimated at $600. Vanek had spoken with the pasture owner, who “thought it was a good idea.” Vanek reported that Norton Road will be receiving heavier traffic. A logging company notified the township that it intends to use Norton Road, which is in poor condition.

A motion was made to auction off the township’s rubber roller at Chalkers Auction with a $1,500 reserve. The motion passed.

Trustee Anna Mae VanDerHoeven motioned to raise Sandy and Dan’s monthly pay for cleaning and oversight of the Nelson Community House. It was seconded and passed. A permanent generator for the Community House was briefly discussed. Outside inquiries were made about the history of the Isaac Mills Building and the Nelson Monument. Road wages from nearby townships were offered for comparison. There was also a brief discussion about local broadband access.