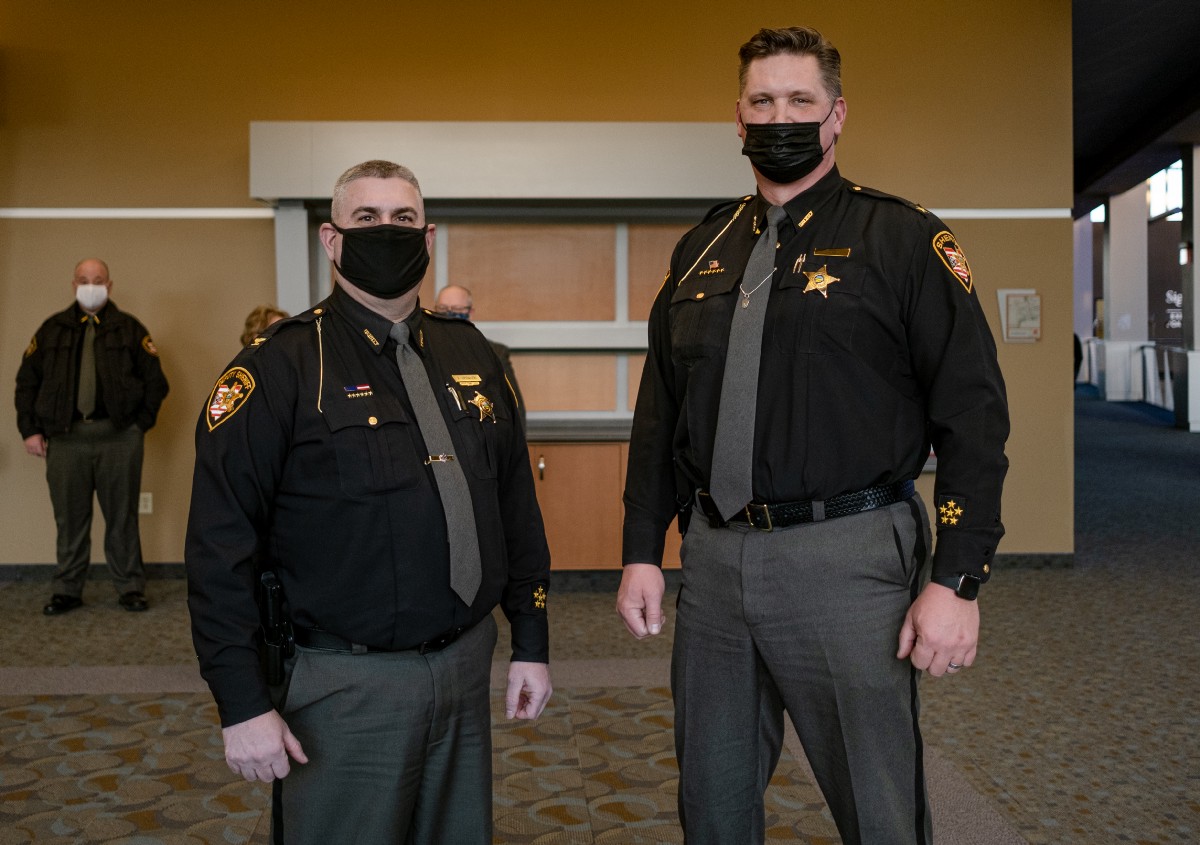 Commissioners cast doubt over a proposal to give new cars to every deputy, and the prosecutor questioned the fairness of salary increases

Portage County officials have raised concerns about key parts of the sheriff’s sweeping budget reforms, which call for a spending increase of $2.9 million over three years to cover raises, new hires, facilities repairs and new equipment.

Meeting with county commissioners for the first time since taking office two months ago, Sheriff Bruce Zuchowski and Chief Deputy Ralph Spidalieri laid out a proposal to expand their fleet so that every deputy has a vehicle. While they presented the plan as a cost saver because it will use newer, leased vehicles, commissioners and the county financial director questioned that premise.

“The basic issue that the commissioners need to decide is: This is an expansion of the fleet that was not prepared for,” Finance Director Todd Bragg said during the meeting. “There is a cost to that.”

The sheriff’s office has also sought to increase salaries across the board, following large raises for its command staff. But in an email to commissioners this week, Portage County Prosecutor Victor Vigluicci voiced concern at the growing discrepancy between the salaries of the attorneys and investigators on his staff and the proposed salaries of sheriff’s office employees.

“I have always tied the salaries of my investigators to that of the starting salary of a deputy sheriff,” he wrote Tuesday. “As my investigators currently earn $51,000, they too would be in line for substantial increases.”

For sheriff’s office deputies who currently make about $59,000 per year, Zuchowski proposed $5,000 raises each year for two years, and a 4 percent raise the third year. Vigluicci also pointed out Spidalieri, with a salary of $104,000, makes about $20,000 more than the civil and criminal division chiefs at the prosecutor’s office.

Spidalieri is also entitled to earn about $61,000 from his other job as a Geauga County commissioner, according to the Ohio Revised Code.

“The salary increases proposed for deputy sheriffs in the upcoming negotiations will place their starting salaries above that currently earned by many of my assistant prosecutors (who have Juris Doctor degrees),” Vigluicci wrote. “While I have always operated my office within the budget allocated to me by the commissioners, I expect to be treated with equal consideration if increases are funded for other county law enforcement agencies.”

Yesterday’s meeting with the sheriff, broadcast live by The Portager after commissioners shut down real-time video streaming, centered mainly on the vehicle plan.

While commissioner Tony Badalamenti voiced support, commissioners Sabrina Christian-Bennett and Vicki Kline, along with Bragg, questioned the proposal. Commissioners said they cannot make a decision on it until next Thursday at the earliest. They plan to discuss the proposal in depth during a work session on Tuesday. Bragg advised the commissioners against instituting this plan this year, but said he’s willing to look into it for the future.

Christian-Bennett said during the meeting that a previous sheriff had provided each of his deputies with take-home vehicles, but switched to the vehicle-sharing model the sheriff’s office currently employs because it saved money.

She said in an interview with The Portager that she’s willing to work with the sheriff on his request, but she would prefer him to work more closely with county leadership when putting together proposals rather than creating them internally. She also wants the sheriff to present his full list of needs to the commissioners so they can discuss together which to prioritize.

Aside from the logistical problems with the proposal, the initial deviation from the current vehicle replacement plan would cost the county, and the plan would incur additional costs over time, Bragg said.

The sheriff’s office would like to immediately lease take-home cars for each of its road deputies, adding 15 new leases to its current fleet and deviating from the current practice of both leasing and purchasing a pool of vehicles that road deputies share on different shifts. This new plan, in partnership with Enterprise Fleet Management, would create a fully leased fleet by 2025, with vehicle replacements every three years. Enterprise would also give the sheriff’s office a portion of the vehicles’ sale values when they sell them.

According to the county’s current vehicle replacement plan, the sheriff’s office is scheduled to receive six new cars this fall. They also received a vehicle from the county’s solid waste department and Zuchowski purchased a new truck for himself earlier this year.

This new lease plan would save the county money on long-term maintenance, Spidalieri said, but Bragg cast doubt on this, and Christian-Bennett remained cautious. Bragg said the county’s current vehicle situation is more complex than the sheriff’s office illustrated in its proposal.

While there’s some value in leasing vehicles and replacing them quickly to avoid significant maintenance costs, he said the cost of constantly leasing new vehicles could offset any savings. He said the county already tries to sell vehicles before they require expensive repairs.

“Most of our maintenance on sheriff’s vehicles are tires and brakes because of the amount that they drive,” Bragg said in an interview with The Portager. “Those types of repairs aren’t going to decrease. When you hit 30,000 miles, you need to replace tires. Whether it’s one car or 10 cars, you still got to get tires when you’ve driven that much. So those types of costs, we aren’t going to see a reduction at all.

“And to be honest, we don’t have a lot of the replaced transmissions and those types of things that are associated with aged vehicles. Generally, if they go in and require those types of repairs, we simply pull them from the fleet at that point. It’s hard to estimate our actual savings. It’s easy to take generic values of here’s what cars over 100,000 tend to do. It’s much more difficult to place that into our actual scope.”

And with more sheriff’s vehicles on the road, he said the county would have to purchase more insurance, and the likelihood of accidents would increase.

“I’m willing to work with the sheriff,” Christian-Bennett said. “But understand, he had a budget that was set last year. He was involved in that. He knew what the budget was because Todd met with the outgoing sheriff and the new sheriff in December. Sometimes you just have to live within your budget.”