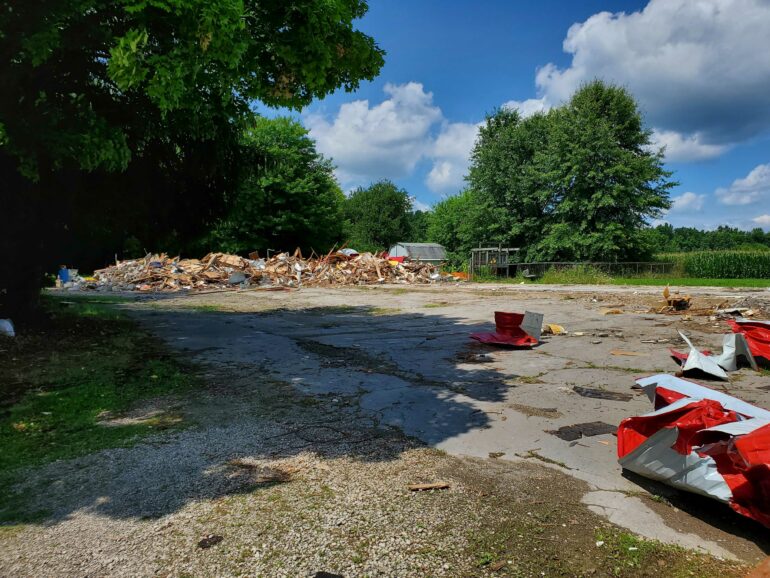 The debris piles were created July 8, when Fox Contracting owner Jeremiah Johnson attempted to fulfill his $12,500 contract with the trustees to pull down the old Flamingo Motel at 6893 Waterloo Road. He transported the debris to his property at 5185 Eberly Road in Randolph Township, intending to take it from there to a landfill in Minerva when he had time.

An unidentified person saw Johnson offloading the debris in Randolph and alerted Randolph Trustee John Lampe, who called the EPA. It turned out that Johnson had never pulled a permit to demolish the Flamingo Motel, and no inspections had been done to determine if the structure contained asbestos.

Lampe said any reputable contractor would know not to dump construction debris on a residential lot, which the Randolph Township property is.

HEPA’s bid includes additional charges for anything over 24 loads that will have to be hauled to an approved hazardous materials landfill. The closest such landfill is in Warren.

“Everything’s on the condition of what the EPA calls ‘clean,’” Atwater Township Trustee John Kovacich said.

No word on when work could start, but “hopefully it will happen very quickly,” Atwater Trustee Thora Green said.

In approving HEPA, trustees turned down Baumann Enterprises, which submitted a bid of $88,777. Like HEPA, Baumann, or at least its sister company, is on the list of EPA-approved contractors, Kovacich said. Also rejected was an earlier $82,000 bid from Cardinal Group in Akron.

Kovacich said the township has enough money to cover the cost of the cleanup and declined to identify other projects the money could have been used for, except to say the township has “other things going in the pipeline right now.”

Money in the township’s general fund can be used for a variety of projects, including zoning, the fire department and maintenance, he explained.

The cleanup bill “could impact future road work,” he said after the meeting. “We always like to have a little cash back in case something of this nature or something even more hideous comes up, we always have something we can fall back on.”

Speaking to Kovacich and Green, Trustee Charlie Harris said the trustees should be present during the cleanup.

“I don’t care if it’s you, one of us, one of us three, I think that as long as we can get some kind of approval, wear something, wear a spacesuit — we need to be down there [at both places] when they’re doing this stuff. … The more eyes the better.”

HEPA, Kovacich said, is used to dealing with the Ohio EPA, and “will do everything by the book.”

“I would like to get this done as soon as possible because everybody’s worried about the weather changing. I’d rather get it done now than snowfly because it’s a best guess,” Kovacich said.

“I just want the stuff cleaned up,” Lampe said during a phone conversation after the meeting. “I’m glad they got somebody and it seems like they’re doing it for considerably less than what the other two bids were.”

Trustees have yet to pay Johnson, who said he billed the township $10,600 for the work he had completed. Johnson maintains he did what the trustees asked him to do, but they say they will look into the matter of his payment when the dust settles.

“That’s something that amazes me, is why you would pay someone to do something that’s costing you $76,600,” Lampe said. “Any contractor is going to know you cannot take construction debris and dump it onto residential property. Any reputable contractor would know that.”

Johnson is already facing a $675 fine from the county building department for his failure to pull the required demolition permit.

More trouble could be ahead of him. Lampe said Randolph Township’s zoning inspector is looking into a report that a person is living in a trailer in the rear of Johnson’s property. The trailer is allegedly not hooked to utilities.

“You can’t be living on a lot with no water, no sewer. I don’t even know how long he’s been there,” Lampe said. “From what it sounds like, it’s probably at least a year.”

Adding to Johnson’s problems is a $386 judgment the Ohio Dept. of Taxation placed against Johnson’s assets on Sept. 8. The tax department had already won a $5,714 judgment against Johnson and his wife Kimberly in January 2021.

“This guy is just as clueless as the day is long,” Lampe said. 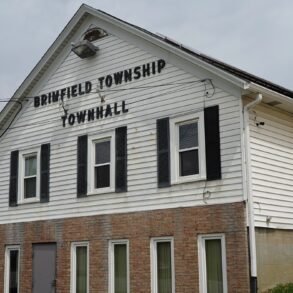