The intergenerational village? It might not even happen, university says 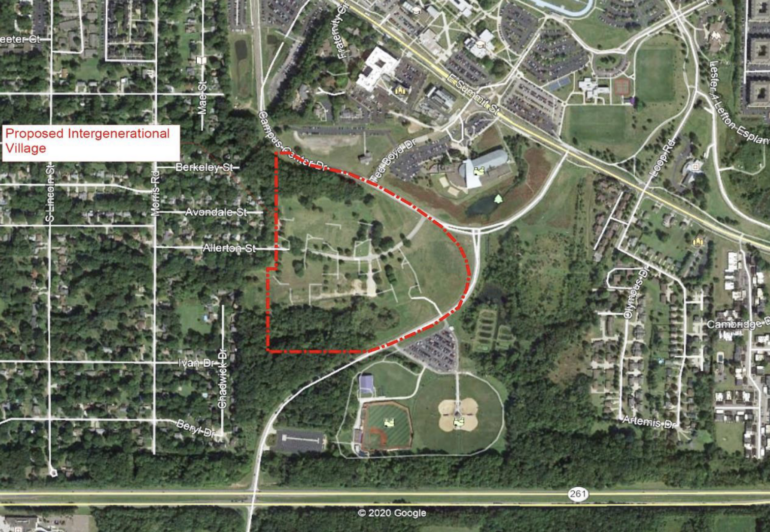 The steering committee for a proposed housing development on Kent State land will require developers to follow the same zoning regulations as a nearby neighborhood, if the project happens at all, officials said at a community meeting Monday.

University and city leaders sought to ease public concerns about environmental and community impacts of the so-called intergenerational village, which could house up to 1,000 people near the rec center on the site of the old Allerton apartments.

They even acknowledged the project may not go forward at all.

“The project is as likely to not happen as it is to happen,” Dana Lawless-Andric, Kent State’s associate vice president for university outreach and development said. “I want to really emphasize that no decision has been made.”

Lawless-Andric admitted there was a lack of communication from the university prior to the first public meeting about the project, on Oct. 29, for which she apologized. Residents at that first meeting had expressed anxiety about how much progress the city and university seemed to have already made, and they worried they weren’t being included in the process.

“We have to do better this time around,” she said. “It’s a miss. This was not the intent of this project at all, to create this unease.”

Over 30 people attended Monday’s meeting at the Kent Police Department, which was intended to clear up confusion and get the public involved in the process.

In a key concession, Bridget Susel, the city’s community development director and a member of the committee, said they would force developers to follow the zoning regulations of the adjoining neighborhood, even though the property is state-owned and not typically subject to those codes. One effect of that decision is that any buildings on the site would have to be below 35 feet, or three stories.

Concepts are also required to include no retail space to ensure they do not compete with local businesses and specifically downtown Kent.

Initial project specs indicate the development would be financed entirely by private developers. Three companies have already signaled their interest, and they have until 4:30 p.m. on March 11 to submit concept proposals, officials said Monday.

Not everyone was placated.

“You guys are taking us for granted,” said John, who has lived in the nearby neighborhood for almost 70 years and did not provide his last name.

John compared the project to a train that was “leaving the station,” and another said the steering committee was only paying “lip service” to community involvement.

Several people at the meeting said they wanted a member of the community who was not affiliated with the city or the university to be on the steering committee. The university did not commit to this, but Lawless-Andric said they would consider it and that there would be further opportunities for the public to give input.

Specifically, after the concept proposals have been submitted and considered by the university, each of the developers will have their own public meeting where the public can assess their plan. Susel also said the public’s comments were being shared with the developers.

Kent City Council Member Heidi Shaffer Bish was present at both public meetings and explained how important community input is to the project. She said she distributed fliers about the first meeting to ensure members of the community were aware of it.

Lawless-Andric agreed with that sentiment, saying hard questions were how the steering committee would make sure an intergenerational village would be an integrated part of the community.

“We need to engage with the community in meaningful ways so that they don’t feel like the train has left the station,” she said.