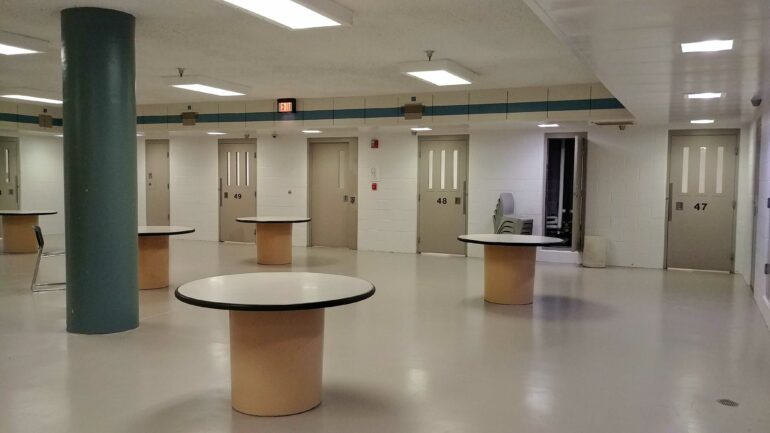 Many cells in the recent $21 million expansion of the Portage County Jail have been empty. Lyndsey Brennan/The Portager

The Portage County Sheriff’s Office is seeking another $1.7 million from taxpayers, mostly to hire 13 new corrections officers to staff the massive expansion at the county jail, which cost $21 million and has never been full since construction finished in December.

Sheriff Bruce Zuchowski, who has already laid out a nearly $3 million spending plan over the next three years, views the empty cells as a missed opportunity to house federal inmates in a high-security cell block. He says the federal contracts would generate revenue for the county: about $100 per inmate per day, totalling $1.4 million a year if all 36 beds of Cell Block A were filled every day of the year.

But Commissioner Sabrina Christian-Bennett maintains the county has already provided $1 million over the past two years to cover the jail’s staffing needs. Former sheriff David Doak was thought to have hired the officers.

After looking at the jail’s employment numbers, however, Christian-Bennett said she didn’t see 15 corrections officers hired with the funding the commissioners approved in 2019. “That means [the money’s] still there,” she said. “So why are you coming to us for another million? It should already be in your budget.”

Her understanding was that the 15 officers Doak requested would staff Cell Block A.

“Sabrina does not know what she’s talking about,” Chief Deputy Ralph Spidalieri said. “She doesn’t know the first thing about running a jail.”

Spidalieri said the commissioners never transferred money from one fund to another: “This money was supposedly sent to us before the sheriff and I got here. If the old sheriff didn’t hire those people, then I can’t help that.”

In addition to 13 corrections officers, the sheriff is requesting money to hire three dispatchers and six deputies because “we are burdening other agencies to handle our calls because we don’t have the manpower to respond.”

Zuchowski said he recognizes the commissioners expected him to adhere to his predecessor’s budget, but he is requesting the bare minimum that his department needs to function safely after what he sees as chronic underfunding for the last two sheriffs.

“That’s Einstein’s theory of insanity, expecting different results after the same thing over and over again,” he said. “And if it didn’t work for one administration, how’s it going to work for us?”

‘My fear is it will sit empty’

Even before the county broke ground on the jail expansion in April 2018, which added new sections and renovated others, commissioners and administrators questioned if the county could afford to staff it.

“We have the funds to build it, but we don’t have the money to staff it. My fear is that it will sit empty,” former Commissioner Maureen Frederick said at the time.

The jail expansion was meant to solve the problem of overcrowding in the women’s wing, since 40 to 50 women were often held in a space designed for 34. Now the women are housed in the new 132-bed section of the jail.

The expansion solved that problem, but created another: The jail is now 13 corrections officers short, according to staffing plan standards from the Bureau of Adult Detention, said jail administrator Bryan Morgenstern.

The jail needs 26 officers to work three shifts per day, which comes out to 78 total. The jail now has 65 corrections officers, so hiring 13 is “scratching the surface and doing the bare minimum,” Morgenstern said.

If the sheriff’s request is approved, nine corrections officers would be assigned to reopen Cell Block A and four would cover the staffing shortage in the other sections of the jail. The cost to employ four officers ($259,607) would exceed the cost the county is paying current corrections officers for overtime, $225,000, but not by much.

Interim Finance Director Dave Lair said that although Christian-Bennett recalls allocating $1 million for additional employees, Doak may not have spent the money on what it was intended for, perhaps putting it instead toward more pressing personnel items like overtime, workers’ comp or health care.

“It’s not like somebody took off with [the money],” Lair said. “We just have to find it in the line items.”

Lair is working with the new Finance Director Joe Harris, who started last week, to figure out where the money was spent and why.

It seems that the sheriff’s office “has always been the redheaded stepchild of the county,” Zuchowski said, in that the past two sheriffs often struggled to secure the funding they needed.

“Our chief accounting, finance officer, Ron Rost, will tell you that every year that he’s been here, we fall short and have to go back to the commissioners and basically beg for money to get through the fourth quarter,” Zuchowski said.

Over the past few months, the jail has earned about $22,000 in revenue by housing inmates from the city of Lakewood, on Cleveland’s west side. Lakewood can’t send inmates to Cuyahoga County because its jail is full.

If Cell Block A gets the staffing it needs to reopen, Zuchowski would like to contract with local municipalities and the U.S. Marshals Service to house inmates from outside the county. The rate would be negotiated between parties.

A few months ago, the sheriff had the opportunity to sign a contract with the U.S. Marshals to house federal prisoners. All he needed to do was pass an inspection, he said, and “we could have had those cells filled the next day.” But because Cell Block A is not staffed, Zuchowski could not realistically consider the option.

“We can’t come to the poker table until we’ve got chips in our hands,” he said.

To help staff the jail, the commissioners could have reinstituted the 0.25% sales tax increase that ended last year, but Spidalieri said they didn’t want to risk imposing a tax when they were up for re-election.

“It’s important for taxpayers to understand that the commissioners failed to act last year, when they knew there was a need for the dollars,” Spidalieri said. (Commissioners Vicki Kline and Christian-Bennett could not be reached for a response to this comment.)

Spidalieri said he believes he has presented an “incredibly solid case” for why the jail would benefit from additional corrections officers, but until the $1 million is located and the funding dispute is resolved, the beds in Cell Block A will remain empty.

“If we were playing chess, we’d be at a stalemate right now,” Zuchowski said.