Portage County will outsource drug testing for defendants out on bond 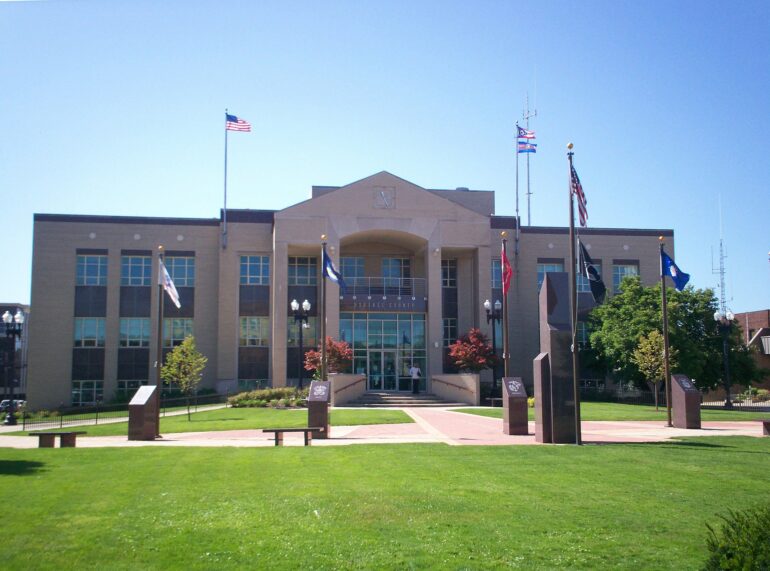 Portage County commissioners recently approved a three-year contract valued at up to $172,000 with Mid-American Court Services to conduct weekday drug testing for defendants who have been charged but not yet convicted of a crime.

Mid-American Court Services, based in Youngstown, held contracts with the county during the Covid pandemic and while the Portage County Justice Center was being enlarged. The company has also provided GPS tracking for Portage County’s high-risk offenders, such as those charged with or convicted of felonious assault or domestic violence.

“If they meet the bond requirements, then we have to monitor them, and GPS is one way of doing that,” Adult Probation Chief Hank Gibson said.

“We are now up to 326 bond offenders that we are required to monitor as a condition of their bond, which includes random drug screening,” Gibson told county commissioners during their Nov. 3 regular meeting. “I wish we could go back to giving a cash bond, but our lovely judges want to continue this.”

A bond offender is a person who is released from jail before their trial with conditions, one of which is that they post a cash bond that is reimbursed once they show up for court. Defendants who cannot post cash bail remain in jail until their court dates.

Defendants who are sentenced to probation remain under the county probation department’s supervision to ensure they are following all conditions set forth by the court, Gibson said.

People with personal recognizance bonds may also risk jail if they test positive during random drug screenings, but the judge decides what the penalty will be on a case-by-case basis, Gibson said. That takes time, and until the ruling is issued, the defendants are incarcerated, known as pretrial detention.

Those released on personal recognizance bonds also have to sign court documents saying they will appear for all court proceedings or pay a court-imposed fine.

What kind of bond a person gets depends on the type of crime, whether the person poses a risk to society, or is a flight risk, Gibson said. He prefers cash bonds because they encourage offenders to do what’s required or risk losing their money or going to jail.

Gibson said contracting out drug testing would allow his staff to focus on changing offender behavior instead of “babysitting” bond clients over whom the adult probation department has no jurisdiction.

The Mid-American Court Services contract will be paid using Portage County’s share of a OneOhio opioid settlement, which nets the county $80,000 a year for 18 years. OneOhio funds must be used for opioid-related purposes, so drug testing for meth, heroin and fentanyl qualifies, Gibson said.

“We’re going to test offenders to make sure they’re not using heroin or fentanyl or opioids. If they do, I’m sure the judge will throw them in jail,” Gibson said.

Gibson noted that during the pandemic, the Adult Probation Office suddenly became responsible for an influx of offenders on probation.

“During the pandemic, according to the CDC, you could only put so many people in the jail pods so they could practice social distancing and to avoid them contracting the virus. Instead of putting them in jail, they were released to the community, meaning to the probation department,” Gibson said.

A similar logistical situation happened during the jail expansion, when remodeling forced temporary space constraints, he said. The expansion is complete, but the policy of releasing certain offenders instead of incarcerating them remains.

“Most of these people that they are releasing are low-risk offenders,” Gibson said. “They’re not murderers, they’re not violent offenders. They’re low-risk, many of them with mental health and substance abuse issues. Research shows that those people should be rehabilitated in the community as opposed to being incarcerated.”

The county’s special drug and mental health dockets — respectively HOPE, RISE and STAR Court — did what they were meant to do, which was to reduce incarceration, Gibson said.

Gibson pledged to work with those offenders, referring them to Coleman Health Services and Townhall II instead of putting them in jail.

The Adult Probation Office had been asked to do it in-house as a required element of the three specialized dockets receiving state certification and funding. To obtain and keep the certification, offenders need to be tested two weekends a month and one holiday a month, Gibson said.

County sales and use tax money will cover the contract cost, commissioners said.

Offenders are assigned a number and must check an app on their phone every day to see if they need to report for a test.

Commissioners also gave Gibson the nod to spend an estimated $62,000 on upgrades to the law enforcement facility at 209 S. Chestnut St. in Ravenna. The building houses the Adult Probation Office, the Public Defender’s office and Domestic Relations Court.

Included in the upgrades are installing touchless soap dispensers, faucets, and toilets in the building’s eight restrooms, and adding hallway water fountains. The upgrades are necessary for both safety and efficiency, Gibson said.

Federal Covid relief funds will cover the cost of the upgrades, commissioners said.