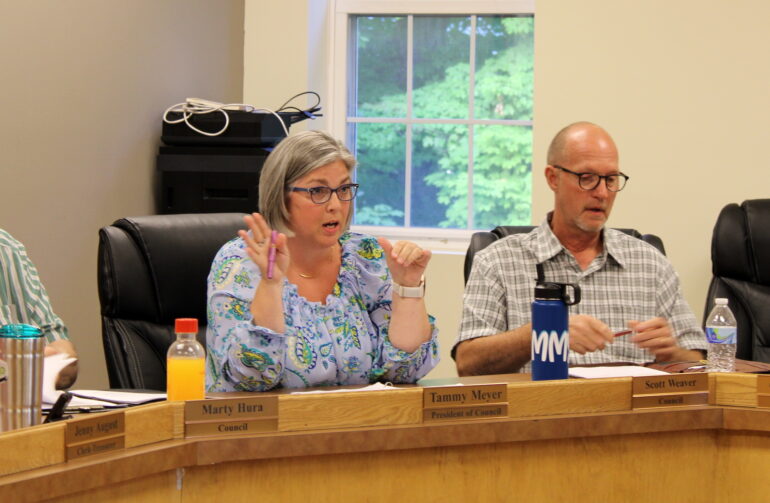 The Village of Mantua is considering a new internal policy that would prohibit elected officials and village employees from answering questions from the public about village operations while on duty.

Instead, village council members and staff would direct questions to the mayor or someone designated by the mayor to field inquiries.

Members of the village council say the rule is necessary to prevent misinformation from spreading. The wording of the draft policy itself mentions avoiding “unauthorized public statements … that negatively impact the village,” according to minutes from an Oct. 12 workshop to overhaul the village employee handbook.

Since the beginning of October, council has been considering a raft of changes to the handbook, touching on everything from office relationships to expenditure reviews.

The village already has a rule against village employees speaking with the news media, and some council members have considered that it also applies to them. The new rule, as proposed, would formally expand this prohibition to council members.

The village’s current policy, which Council Member Steve Thorn called “restrictive,” states that “all official communication with the news media will be issued by the mayor or his/her designee.”

“We’ve debated about that quite a bit,” Thorn said. “The idea was just basically to say maybe we should have a point of contact for all questions that people would ask just to make sure that we’re all presenting the same picture with regard to issues.”

The draft policy states: “Any employee or elected official contacted by the news media or a citizen on a matter related to village operations should direct the caller to contact the mayor or his/her designee.”

The policy is meant to “avoid duplication, assure accuracy, and protect employees and elected officials and the village from the dissemination of misstatements and misinformation.”

For council members, “on duty” means during open meetings.

Council expects to tweak the proposed policy in upcoming meetings, with Thorn anticipating approval in February at the earliest.

Thorn said he knows the new policy sounds like council members may not voice their opinions about things. The idea, he said, is that neither council members nor village employees speak negatively about Mantua’s people, policies or issues as long as they are on duty.

If a reporter or citizen approaches village employees or council members when they are not on the clock, they would be within their rights to answer questions, Thorn said.

However, “If somebody asked me a question about some policy that council approved, and I said, ‘Yeah, I voted against it. I think that’s a terrible idea, I think council’s done a horrible job,’ or ‘The mayor’s acting recklessly,’ that would be my private concern that negatively impacts the village in terms of me presenting a negative opinion that would tend to erode confidence in the ability of council to fairly administer the work we’re doing,” Thorn said.

He said he would defer questions about sensitive issues, such as investigations, to the mayor.

“Any investigation that we would undergo obviously is sensitive to the people that are involved in it, and ideally we would be able to conduct an investigation behind the scenes. Nobody’s name gets out, no rumors go flying until the issue is resolved one way or the other, and then we would make public the results of that investigation,” he said.

Council President Tammy Meyer said the proposal is not in final form and may well be changed.

“I think answering questions the press and the people of Mantua have is a good thing for transparency,” she said.

Council’s intent is to determine who the official points of contact should be in any number of situations “so misinformation isn’t going out,” not to stop people from commenting if they want to, she said. In some instances, the mayor may be the appropriate spokesperson. In others, it may be the police chief or a department head.

Mantua Mayor Linda Clark confirmed that the proposed directive is a work in progress and said council has the right as legislators to set and update village policy. As far back as 2010, village council has tweaked the employee handbook on an almost annual basis, oftentimes addressing multiple issues

“Any resident or business owner is free to call upon any elected official and ask them a question, but when they give out information, they should make sure they are giving out correct information,” Clark said.