Hardesty: Memories from the Doug Hardesty Hall of Fame

It was a Chamber of Commerce afternoon in Seattle, Washington, as I stood on the balcony of our room on the cruise ship Norwegian Star, still tethered to the dock in the placid waters of Puget Sound.

I surveyed the splendor of downtown Seattle laid out in front of me like a painting, the vibrant colors of the city popping from nature’s canvas on this beautiful June day in the Pacific Northwest, as I spoke on the phone with my dad, 2,435 miles away in Mogadore, Ohio.

I had called to say happy Father’s Day and told him I wished I could be there with him. “Don’t worry about it, kid,” Dad said. “There’ll be other Father’s Days.”

Two weeks after our conversation, Dad died at home of a massive heart attack. He was 63.

Of course, I had no clue standing on that balcony that day, my wife Kim and I bubbling with excitement about taking the first cruise of our lives — a long-awaited one-week trip through Alaska’s Inside Passage that had been five years in the planning — that it would be the last Father’s Day I would ever spend with Dad, even if we were a continent apart. He was only 63, looked great and seemed to be fine. Never in my wildest imagination did I think the next time I saw him, he would be in a coffin. And in two weeks, no less.

So it has now been 17 years since I last talked with my dad on Father’s Day. Which makes me like millions of others who have lost their dads, when visiting them on Father’s Day means making a trip to the cemetery.

And like millions of others, I spend Father’s Day reminiscing and reflecting about Dad, my mind invariably drifting to happier — and often downright hilarious — times. Here are a couple memories from the Doug Hardesty Hall of Fame:

As a teenager, one of my responsibilities was mowing the lawn. We lived in your basic two-story house in Mogadore with a postage stamp-sized yard, so mowing it wasn’t exactly fairway upkeep at Augusta. I could knock it out in 15 minutes, tops.

One day as I went out to the garage to get the mower, Dad intercepted me and told me not to worry about it, he was going to do it that day. At first I thought he was joking, because I didn’t remember Dad ever mowing the lawn. I did it almost exclusively. It was kind of my thing as the young-and-spry member of the household.

I told Dad not to worry about it, I would do it. But he insisted. So I said we could split it, with Dad mowing some and me mowing the rest — an unnecessary arrangement considering the size of the yard, but I was trying to be fair.

So off Dad went with the mower, and off I went to do whatever else in the yard, keeping an eye out for when it looked like he had half of it done so I could jump in and do the rest.

About 10 minutes later, I walked over to him and shouted over the running engine of the lawnmower, “OK, Dad, I can take it from here.”

“That’s OK,” Dad shouted back. “I’m feeling good. I’ll finish it.” And he proceeded to continue down the fence line as I went back to meandering around the yard.

A couple minutes later, the mower engine stopped. He couldn’t be done already, so I turned around just in time to hear Dad say, “Uh-oh.” Then exclaim, “Oh no!”

He was a good 20 feet from me, so I couldn’t see exactly what was going on. He was staring down at his pants and backing away from the mower. A couple moments later, he sprinted toward the back door with what looked like a black cloud following him.

He had run over a yellow jackets nest with the lawn mower.

I stood in disbelief as Dad furiously swatted at the air and beat at his clothing as the black cloud descended on him. “Help! Help! They’re on me! Help!” he shrieked.

Mom burst out the back door, almost hitting him with it. “Doug, what’s the matter? What’s going on?” she said, panicked.

“Just get ’em off me!” he exclaimed, ripping his clothes off as fast as he could.

It was then Mom saw that he was covered in yellow jackets. I mean, it was a scene straight out of an Alfred Hitchcock movie. His body seemed to be crawling with the insects. (I later discovered that a typical nest contains several thousand yellow jackets, to give you some idea of the battle taking place on Dad’s body).

By this time I had recovered from my shock and had raced to Dad’s aid, with Mom and I throwing all caution to the wind trying to knock the yellow jackets off him.

But it was futile; there were way too many. And it was dangerous. The yellow jackets were beginning to attack us, too, prompting me to take off running across the yard screaming like a wild man as Mom quickly closed the door and ducked inside to safety, leaving Dad to fend for himself against the angry swarm of yellow jackets (you know, discretion is the better part of valor, and all that).

Finally, down to his underwear and panic stricken, Dad flung open the back door and hurried inside, unwittingly bringing some of the yellow jackets with him. I made it inside the house relatively unscathed, with one sting that I was aware of — which was a whole lot better than Dad fared. He lay moaning stretched out in his easy chair, clad only in his underwear, little red welts all over his body, mumbling stuff we couldn’t quite make out. I’m pretty sure he was getting delirious.

“Doug, let’s get you to the hospital. You’ve got stings everywhere,” Mom insisted.

“No,” he muttered. “I’ll be fine. Let’s just put something on the stings and see how I do.”

I didn’t think shunning professional medical treatment was a particularly good idea, but he refused to move off the chair. So there he lay for the next several hours, moaning and groaning as Mom tended to the stings.

Incredibly, he somehow recovered without incident (I’m not going to lie, I wasn’t sure it was survivable at first), and the story became the stuff of legend in our house. Over time, it actually became funny — you know, the old “we’ll laugh about this later” effect. But while it was happening, it was downright terrifying. Every time it came up, Dad would turn serious and say, “I was in real trouble.”

Yeah he was. And it could have — should have — been me behind that mower when it ran over the yellow jackets nest. Any other time, it would have been me. But for some strange reason, he absolutely insisted on mowing the lawn that day.

And only that day.

Unbelievably, this one represents another one-and-done for Dad: the time he decided to trim the hedges in the front yard. Again, I had never seen him perform that task before, so I was surprised the day he grabbed the clippers from the garage and headed to the front yard.

He was out there trimming away when something suddenly hit him in the head so hard it dropped him straight to the ground. He felt a large welt forming instantly on his head and looked around to see what possibly could have hit him so hard.

As he glanced around, he noticed a group of kids in the yard across the street. Figuring they were probably throwing rocks — boys will be boys, after all — and had decided to use him as target practice, he contemplated going over and finding the parents of the little delinquents.

Deciding to give the kids a mulligan, Dad dutifully went back to his hedge trimming, wary of any activity across the street.

Just when it seemed the crisis had passed — and with his head still throbbing — Dad heard the loud screech of a bird above him, looking up just in time to see a blue jay swooping his way. He heard, “Caw! Caw!” as it took aim directly at him. Realizing he was in the blue jay’s crosshairs, Dad hit the deck at the last instant as the blue jay passed just over his head on its dive-bombing mission.

As he lay face down in the grass, it dawned on Dad that what had drilled him in the head a few minutes earlier was no rock. It was a beak. And the culprit was not a kid. It was that blue jay.

As he got up, he looked around to see where the bird went and noticed the source of its anger: a nest in the spruce tree in our front yard. Apparently, the blue jay thought Dad was a clear and present danger to its young and decided to take action.

Undeterred, Dad went into the house, grabbed my football helmet, put it on, snapped the chinstrap and went back outside to finish trimming the hedges. If the blue jay returned to finish the job, this time Dad would be ready.

Fortunately, the bird gave up the attack and Dad finished the hedges without incident. The battle royale finished as a draw, with our blue jay winning the first round, the two species fighting to a draw in the second, and Dad winning the third.

Dad was a little worse for wear with the welt on his head, but he avoided further trouble by not crossing the street to confront parents of falsely accused children.

All in a day’s work. 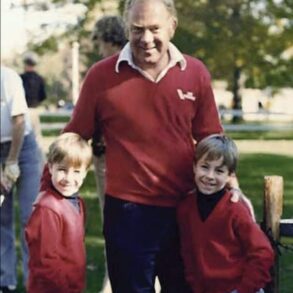 Hardesty: Roosevelt golf coach Brent Pfeiffer reflects on his father’s legacy as he leaves behind his own 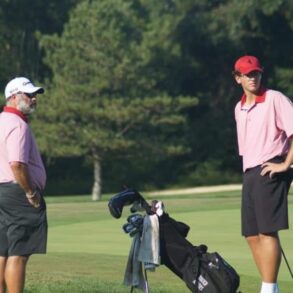 Hardesty: Brent Pfeiffer will retire from the winning golf program his family built at Kent