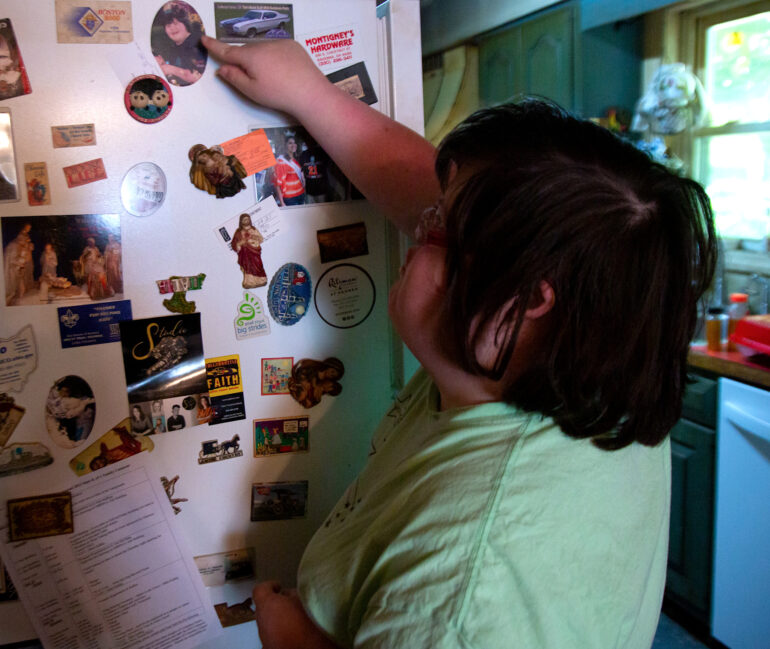 Clarissa points to a picture of herself when she was younger that hangs on her fridge. She said she used to play softball before she owned her business while she was still in school. Sophia Lucente/The Portager

Clarissa Drouhard has never let Down Syndrome hold her back.

The 34-year-old entrepreneur owns her own art business and lavender mini farm called Clarissa Menagerie, with the help of her mom, Donna.

Growing up, many people doubted her, her mother said, but her spirit never wavered. As one of few children with Down Syndrome to pass through Rootstown schools, Donna said a fourth-grade teacher failed to integrate her into the class, placing her in a corner of the room.

Donna took the opposite approach: “If she’s able to do it we let her do it,” Donna said. She attended school board meetings and spoke with the district to allow Clarissa to have the best education possible.

Plus, some of her peers did believe in her.

Donna said Clarissa participated in Brownies, a girl scout group for elementary-age girls. The other girls in the group encouraged and loved Clarissa, and she became good friends with them. Donna also said her four older siblings influenced her, setting an example for her as she grew up.

Clarissa’s art and hobbies were another source of support, particularly creating pieces with clay. Donna said her hobbies help keep her “mind busy.”

Clarissa has been drawing since the age of 2, scribbling on papers in school and eventually taking workshops after she graduated high school. Now, Donna handles the business side of Clarissa Menagerie, while Clarissa makes the art.

Some of her favorite art pieces include her clay sculptures, including a Japanese Raku mask made at one of the workshops she attended. She appears at various events, selling her art at tables at Art on Main in Ravenna and the Buddy Walk, put on by the Down Syndrome Association of Northeast Ohio.

Recently, Donna and Clarissa started growing lavender plants in their backyard. They sell bundles at the tables or cook with it, putting it in lavender cookies and lemonade.

Clarissa has always accomplished what she set her mind to regardless of her disability, Donna said.