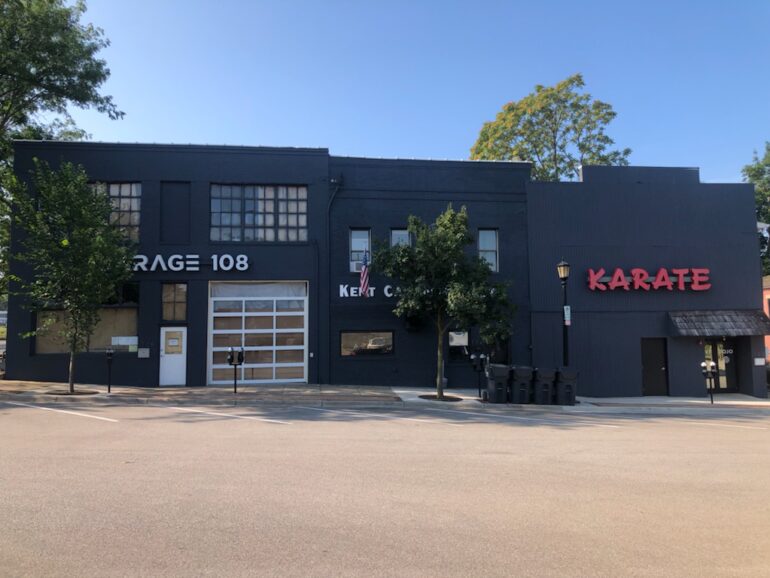 Kent City Council has never overturned an Architectural Review Board ruling. Until now.

Valerie Landis, who owns the property at 108 W. College St., petitioned the ARB in September for permission to install an internally lit sign (one lit by LED lights inside the sign box) with the name of her business, “Garage 108.” Landis is working on a massive renovation and restoration project involving her properties at 108 and 122 W. College St.

The ARB declined to act. The members heard her request but did not make a motion for the required Certificate of Appropriateness Landis needed to install her signage.

Where Landis and city agree is that the guidelines the ARB is tasked to enforce are silent on the subject of internally lit signs, but those same signs are allowed under the city’s zoning code. So it is the discretion of the current members of the ARB.

“Time after time, people come to us with internally lit signs here and we say, ‘No,’ and that is to maintain the aesthetics of the downtown district,” ARB member Kevin Koogle told Landis in September.

Under fire from Landis and Kent entrepreneur Mike Beder, who also seeks to overturn an ARB ruling, city council is set to hire a consultant to review the city’s ARB guidelines.

“I am grateful that city council took the time and energy to review the sign matter,” Landis said after the vote tally. “Signs are the first thing patrons see, to know if there is an active business in the community. This is a fundamental issue for any business to thrive, especially during a pandemic.”

Council members Jack Amrhein and Roger Sidoti cast the only votes against Landis’ signage request. While he said he is sympathetic to Landis’ plight, Amrhein said overruling the decisions of the city’s boards and commission sets a dangerous precedent.

Echoing Amrhein, Sidoti said council should concentrate on making policy, not on overruling board decisions.

“I think both sides on this really screwed up,” Sidoti said.

Others on council did not agree with Amrhein and Sidoti’s arguments.

Council Member Heidi Shaffer Bish, careful to note she respects the ARB and its role in keeping Kent’s downtown as aesthetically consistent as possible, said, “We need to balance the aesthetics with the need to support business, especially new and locally owned business.”

“I think this sounds very reasonable to me and the reasons to deny it don’t strike me as strong enough to deny your sign,” Council Member Gwen Rosenberg agreed.

Responding to Landis’ observation that some of her multiple encounters with the ARB had been less than positive, Council Member Robin Turner apologized on behalf of the city.

“That’s not what we want to be about. We want to promote your business when we can,” he said.

Council Member Garret Ferrara, who noted the city is poised to extend its DORA boundaries to help two businesses, should help Landis’ business as well. Her property is already a “vast improvement” over what was there, he said.

“I believe the building does look good, but the ARB has their aesthetic sense, and sometimes, in the absence of design guidelines that are really clear, I think that sometimes that sense can overwhelm a project that the average person would agree is an enhancement rather than a detraction,” Shaffer Bish said.

Sidoti said he hopes hiring a consultant will help city leaders reconcile the inconsistencies with Kent’s zoning code and the codes that the ARB follows, Sidoti said.

“We are going to wrap our arms around this and make it clearer so that the average person can walk in and say, ‘What is allowed and what isn’t allowed?’ so it doesn’t appear to be arbitrary decisions,” Sidoti said.