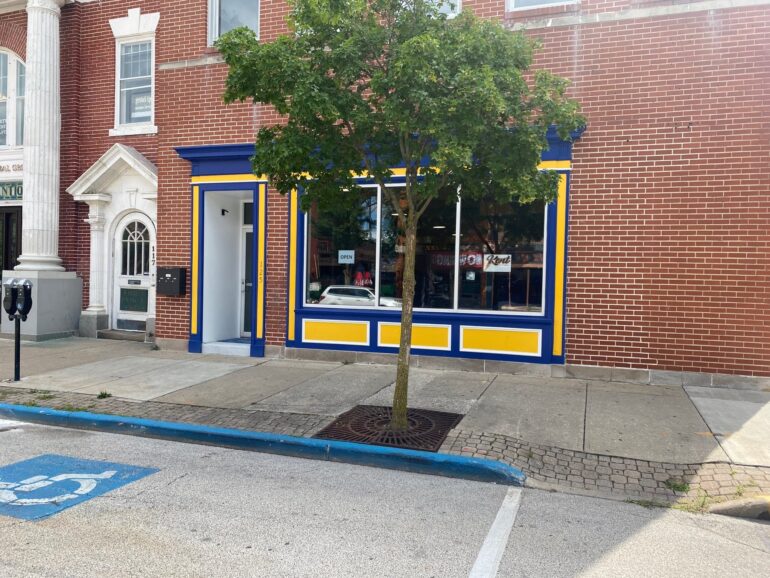 Kent businessman Mike Beder’s recent run-in with the city’s Architectural Review Board has prompted city council to examine — and perhaps update — the design guidelines that inform the ARB’s decisions.

The city recently underwent a process of updating its zoning code, which was finalized in June, but it did not address design guidelines under the ARB’s purview. Now, Kent Community Development Director Bridget Susel is working up a cost estimate to hire a consultant tasked with reviewing those guidelines.

The ARB recently declined to issue a required Certificate of Appropriateness for Beder’s new business venture, at 125 S. Water St., saying the blue and yellow paint scheme he chose does not fit in with the neighboring buildings. Kent Sportswear specializes in Kent State attire and targets KSU fans, students and their families.

Beder has pledged to appeal the board’s decision. He and some council members have called the ARB’s ruling “subjective.”

“Council gives us guidelines as to what we should be looking at when it comes to the downtown district,” Boyle said. “I don’t ever think that we have been arbitrary. We look at the guidelines, and we try to interpret them based on the building at hand.”

The building’s yellow and blue color palette “effectively tells everybody that that is a Kent State University store,” Boyle said. While he agrees the shop is exactly that, the paint scheme becomes, in effect, a sign, “and that is not appropriate for the building,” he said.

Nor does it fit into the ARB’s guidelines for the central business district, Boyle said, adding that the ARB compromised by approving 75% of Beder’s color scheme, asking only that he eliminate the yellow around the door and window.

“You have to look at the downtown,” Boyle said. “It looks pretty good. There’s a lot of compatibility with the downtown buildings, and that’s what council asked us to do.”

However, apart from Beder, the only other business that has expressed interest in appealing an ARB decision is Garage 108, a co-working space and business incubator, Susel said. Council Clerk Amy Wilkens said she does not recall anyone appealing ARB rulings to council in the two years she has worked there.

Council Member Jack Amrhein does not.

“I don’t want that role. The reason we have commissions and boards is so that council isn’t involved in every decision,” he said, adding that an exception would be “if something’s been totally botched or not fair or doesn’t seem to go along with what the intent was.”

“In the absence of some real, true design guidelines, we do end up getting into these very subjective rulings and may be considered sometimes pretty unfair and creating a business climate that is chilling,” Council Member Heidi Shaffer Bish said. “So I think we need to have something that everybody knows in advance: These are the guidelines.”

Beder also has the support of Council Member Gwen Rosenberg.

“I think that what they presented was valid,” she said. “I think the reasons for it being rejected were too subjective, and I don’t think it was given the proper attention that perhaps it deserved.”

In declining Beder’s bid for a Certificate of Appropriateness, ARB member Kevin Koogle said the board considered surrounding buildings.

“How do you define art?” Koogle asked, admitting that he finds Beder’s color choices “unattractive.”

Beder says he is pleased with the direction the city is taking.

“I think council is doing their job and that they saw there was an issue with consistency, with how things are set up right now,” Beder said. “They’re addressing how to make it better and more consistent and more fair. I think cooler heads will prevail when we go to council for appeal, so I’m not overly worried about it.”

If Beder loses that appeal, the city could force him to repaint his storefront. The store is open for business in the meantime.

Editor’s note: Mike Beder is a member of The Portager board of advisers. Beyond giving an interview to our reporter, Beder had no other input for this story.