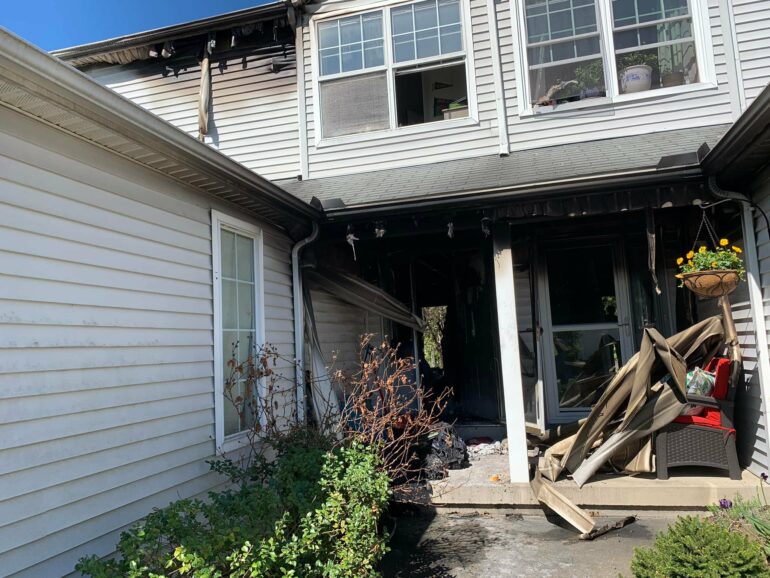 Firefighters stopped a fire from spreading in Streetsboro early on the morning of May 14, 2022. Photo via the Streetsboro Fire Department

Streetsboro firefighters responded Saturday morning to a call regarding heavy smoke on Crownwood Court in the Hickory Ridge neighborhood, just north of state Route 303 in the city’s southwest quadrant.

On arrival at 694 Crownwood Court, firefighters found all tenants from that unit and a half dozen surrounding units safely outside. Apart from one resident treated on the scene for smoke inhalation, there were no injuries, according to a Streetsboro Fire Department press release.

Fire crews entered the structure where the fire started and stopped it from spreading, the release states.

They said the fire was an accident, presumably caused by careless smoking. Damages to the unit of origin and neighboring units is expected to surpass $200,000.

A calico cat that was apparently a family pet could not be found after the fire, but could not be located inside the structure, the release states.

The incident occurred at 7:08 a.m. Saturday. Mutual aid and EMS was provided by neighboring communities, and the American Red Cross was on scene for additional support.

Documenters: Streetsboro City Council and Finance Committee meeting for May 23, 2022