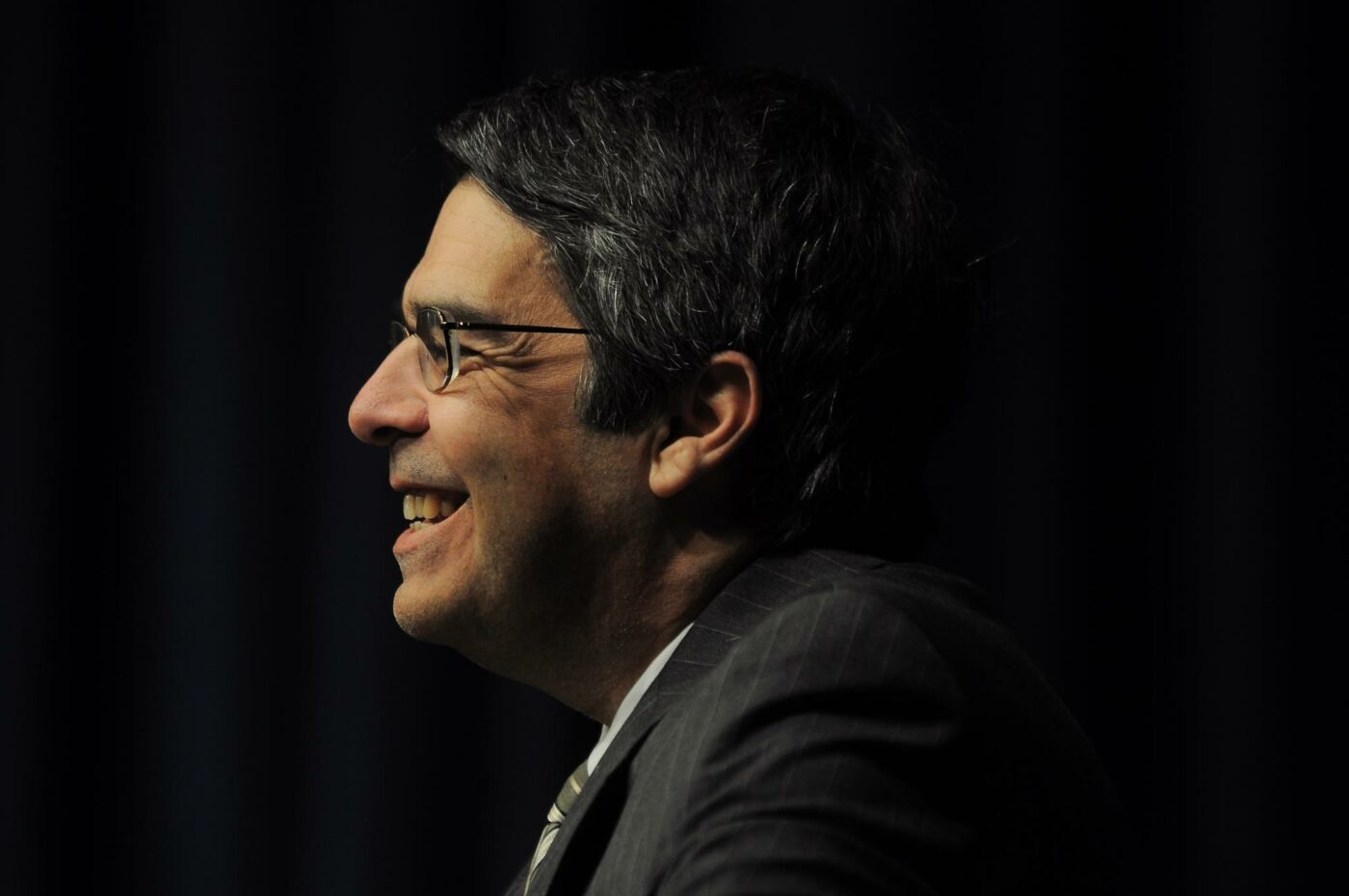 Roger Di Paolo, a historian and journalist whose work enlightened Portage County residents about their own community for over 40 years, died June 18 at the age of 66.

A Kent native who never strayed, Di Paolo edited the Record-Courier for a generation while writing over 700 history columns, weaving threads of the past into memorable narratives of the characters who shaped his city. He compiled these stories into three books about Kent and Ravenna, including Rooted in Kent: 101 Tales from the Tree City.

Friends say his mind was a steel trap, filing away names and dates like a local archive, easily dispensing historical anecdotes to wide-eyed cub reporters and captivated lecture halls alike.

This facility served him at the helm of a daily newspaper and beyond. After the paper changed ownership and restructured him out of his job in 2017, Di Paolo discovered new outlets for his talents. He served as a community liaison for Family and Community Services and as the Historian in Residence at the Kent Historical Society.

Di Paolo’s health loomed in his mind after surviving a heart attack at 53. His heart remained healthy over the next decade until he was diagnosed with prostate cancer, which began quickly spreading earlier this year.

He is survived by his husband, Timothy Krasselt; his son, Brian Di Paolo; and his sisters, Linda Di Paolo Prezioso and Betsy Soule.

Roger Joseph Di Paolo was born June 3, 1955, at Robinson Memorial Hospital. His father, Roger Di Paolo, was a scrappy Ravenna lawyer who would eventually become a municipal court judge, and his mother, Pauline, worked in the Kent State admissions office, from which she retired in 1986.

As kids, Di Paolo and his sister shared few interests and had little in common: Roger the pensive boy making sketches while mom cooked, Linda watching football with dad.

Di Paolo was close to his mother throughout his life, Di Paolo Prezioso said.

“The two of them could fight like cats and dogs,” she said. Sometimes she would get phone calls from each of them after an argument complaining about the other. “And then two days later, I’d call mom and ask what are you doing, and she’d say, ‘Oh, Roger and I just finished a nice dish of pasta.’ They never apologized, they just picked up where they left off.”

And he inherited her “steel trap” mind, his sister said. Friends recalled Di Paolo was always one of the brightest kids in class. Coming from a strict Catholic Italian family, he attended St. Patrick School and then went on to Davey Junior High School and graduated from Roosevelt High School on his birthday in 1973.

“Roger is my longest, dearest friend, going back to ninth grade at Davey Junior High,” said Ernie Mastroianni, who also worked with Di Paolo as a photographer at the Record-Courier. “I knew him then as one of the brightest people in nearly all of my classes, even in art. I was drawn to his talent in writing, knowledge of history and extraordinary vision in art class.”

Di Paolo’s father wanted him to become a lawyer, but the family always suspected he would become an artist. His writing side won out: After a brief stint at Oberlin, Di Paolo went on to Kent State where he studied journalism, a noble calling in the wake of the May 4 massacre and at the height of the Nixon era.

He worked on the Daily Kent Stater and then covered the university’s gym annex controversy as one of his first assignments as a reporter for the Record-Courier. He spent months on the story, in which protesters occupied the site of the May 4 shooting, refusing to let bulldozers prepare the soil for an expansion of the gymnasium. As tensions mounted, Di Paolo’s father feared his son might be putting himself in danger and drove to the protest camp to find him. When he arrived, they both ended up coughing through clouds of tear gas.

Materials from Di Paolo’s newsgathering at that time are now part of the Special Collections and Archives at the Kent State Library as the “Roger J. Di Paolo Papers.”

In 1982, he became city editor, managing Kent coverage from the paper’s former bureau on South Depeyster Street. In 1991, he was promoted to editor of the Record-Courier, a position he occupied for the next 26 years.

Di Paolo was not the gruff newspaper editor barking orders from inside his office. He occupied a desk in the newsroom alongside his team, quietly preparing pages, fielding readers’ comments and drafting the paper’s unsigned staff editorials, which represented the opinion of the newspaper on all kinds of issues.

As the local paper in a college town, the Record-Courier served as the proving grounds for a long succession of junior reporters, and he relished his role as mentor.

“Roger was very low key and patient with new reporters — and there were always ‘new’ reporters,” said Mike Sever, a longtime county government reporter for the paper who is now retired. “When there was a major error in a story and Roger got the blistering phone call, he never passed on the invective. He’d quietly tell the reporter they had goofed and had to fix it. He was very good at taking the heat off his staff.”

Several former colleagues described moments when Di Paolo seemed as sensitive to their personal struggles as he was to their typos. One reporter, Marilynn Marchione, who went on to write for the Milwaukee Journal Sentinel and the Associated Press, described a typical Di Paolo story:

“When I was more than a week overdue with our first child and grieving the loss of a man who was like a father to me, Roger took me in all my giant belly’s glory to a new ice cream place in Kent and we got the biggest gooiest concoction they sold.”

Di Paolo prized news stories that illuminated overlooked pockets of Portage County. He said the best compliment he ever received was from a reader who told him, “You cover news that nobody cares about.”

He lavished praise on his staff and found humor in life’s subtle ironies. “Too funny,” he would say.

Di Paolo won numerous awards and even received a key to the city of Kent. But he always said the best thing he ever did was become a father to Brian, in 1994.

He recalled that day in a column he wrote for The Portager after Brian’s wedding.

In the same column, he wrote, “I never found myself going head-to-head with [Brian] like I did with my father; our time together was too precious.”

Becoming a father and enduring a divorce seemed to give Di Paolo new perspective on his own father, and the two grew closer, his sister recalled. Di Paolo proudly told stories about his namesake, the young Italian lawyer who couldn’t get a job at a firm because of his immigrant last name. So he set up his own practice and took on the clients no one else would, who were often Black.

In 1957, the elder Di Paolo helped a Black man avoid the death penalty after he was falsely accused of a high-profile murder, a tale Di Paolo described at a recent NAACP event.

Still grieving her death and entering the twilight of his career, the Dix family sold the Record-Courier to a national chain that quickly began slashing costs. Di Paolo was laid off after a month.

He said it happened “like a bolt out of the blue” and that he was given two hours to clear his desk.

“As I left for the last time, I got a standing ovation from my staff,” he said. “It was like something out of a movie.”

Without any severance or health insurance, he worried about his future. But he soon found a second career in the nonprofit sector, helping Family and Community Services with community and public relations. Without the pressure of newspaper deadlines, he told friends that he was finally enjoying his work.

He also married Krasselt that year, kicking off a period of his life that Di Paolo Prezioso believes was his happiest.

“He loves me more than I’ve ever been loved,” Di Paolo told his sister in the weeks before their civil marriage.

Last year, Di Paolo became a board member of The Portager. He resumed his history column, writing over two dozen stories in less than a year, and appeared several times on The Portager podcast, where he plucked facts from his vast mental catalogue. “I got my voice back,” he would say.

Di Paolo said he always read the obituaries and frequently shared his favorites on his Facebook page. He especially appreciated those that spun a good tale, celebrating the ways ordinary people could make a profound impact on those around them.

Remarking on one he particularly liked, Di Paolo wrote: “The story of a life, so very different than news of a death.”