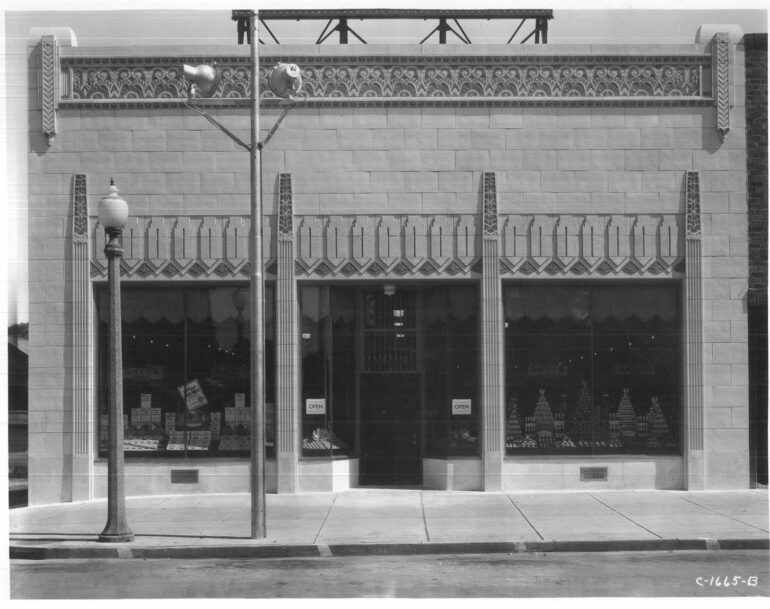 "Acme #26, built in 1920, was originally an Art Deco masterpiece. Unfortunately the front of the building was later remodeled." Photo: Portage County Historical Society

There’s no way around it: The building at 218 W. Main St. in Ravenna is ugly.

It looks like somewhere you’d go to buy stamps or file for unemployment. The facade is unremarkable except that it is crumbling. Concrete tiles have fallen off its monolithic face, and the paint is chipping off the pillars, as though the building itself is trying to shed an architect’s mistake.

Because what’s underneath is majestic.

Behind those dull tiles may be the original 1920 facade, a gorgeous example of art deco architecture in our very own county seat.

Doug Fuller, a local architect, says the original facade may still be there, according to a recent article in the Record-Courier.

We may only find out during the demolition. The building is slated for the trash heap.

That’s what seems to happen in Ravenna: We tear down the beautiful symbols of the city’s former ambitions and put up cheap, functional boxes, like the county courthouse. Or we replace them with parking lots.

That’s the plan for this space. When 218 West Main comes down, the city isn’t replacing it with a restaurant or cafe or bar, no shops or community centers, no bookstore, music venue, park, gallery, dance studio, loft apartments, or grocery co-op. Nothing that would entice a person to come to Ravenna and value the city as, say, a weekend destination.

Nope. Just another slab of asphalt.

So you can park closer to Guido’s. That is the reason.

I love Guido’s, by the way. Long live Guido’s. It’s not about that. I’m not against demolishing historic buildings, either. I used to be sentimental about this, but now my attitudes are pragmatic: We should use urban spaces in ways that improve the lives of the most people.

Restoring the art deco facade of an old Acme store might do that, or it might not. Sometimes building a parking lot is exactly what’s needed.

In this case, it’s not. Ravenna has more parking spaces than reasons to park in them.

Thanks to Kent State geographer Jennifer Mapes, we have some data to help back this up.

Here’s a map she made that shows all the parking lots in Ravenna highlighted in bright red. As you can see, the city is bathed in red. And this doesn’t even show street parking.

But we don’t have to take Mapes’ word for it. Main Street Ravenna produced a report that shows Ravenna has over 3,000 downtown parking spaces. “For a city of 11k, with 16% percent of households without access to a car, I think that is plenty,” Mapes wrote.

The people who lived in that city were projecting Ravenna far into the future, imagining their children and grandchildren elaborating their dream, creating a kind of civic life bursting with commerce and culture.

They were investing in you, the people of this city.

Destroying the past isn’t a tragedy. There are many parts of our history we should destroy. It’s only a tragedy if we can’t imagine planting something new to grow in its place.

Clarification: The op-ed originally referenced Main Street Ravenna as “the city’s own redevelopment committee.” MSR is a civic group that isn’t part of Ravenna government.