How over 1,500 people are helping raise money for the King Kennedy Center 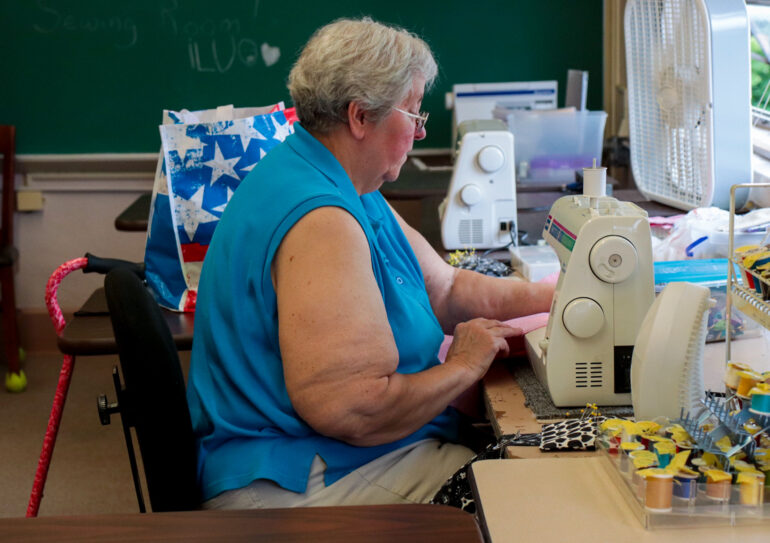 A cocoon maker volunteer, Anne, sews a project in one of the three rooms the Cocoon Makers use at Rausch Middle School on Wednesday, July 27. Sophia Lucente/The Portager

In a project that involved over 1,500 Kent State students and dozens of volunteers, 18 quilted art pieces are now on sale to benefit a community center in one of Portage County’s historically impoverished communities.

The quilted pieces are part of the Social Justice Quilting Project and will be auctioned off virtually until Sept. 9. All of the money raised will go toward the King Kennedy Community Center, which was originally built in the 1970s with the help of university students. The center offers a safe place for youth to hang out and participate in social and educational activities.

Amanda Woodyard, director of Community Engaged Learning at Kent State, came up with the idea for the 2021 freshman class day of service project, said Louise Ditchey, who directs graduate programs at the university’s business college.

Although the students played a big role in this project, “virtually none of the students knew anything about sewing,” Ditchey said. Also, when Ditchey met with a group of 20 administrators after the project was over, only two had sewing machines.

To overcome the gaps in equipment and expertise, Ditchey and Karen Gajewski, project coordinator at Family and Community Services, found volunteer groups to help with the stitching part. The volunteer groups were from the Portage Senior Center, Portage RSVP and other organizations that came together and hand-stitched the squares, Gajewski said.

Once the squares were done, they turned them over to the Cocoon Makers.

The Cocoon Makers are a local volunteer group that primarily make cocoons — their word for sleeping bags — for people experiencing homelessness in Portage County. With their expertise in quilting, Ditchey asked them for help, and they took on the challenge.

“They did the quilting,” Ditchey said. “Quilting requires three pieces of fabric. There’s the top layer that we did, there’s the bottom layer [and] that’s the backing … So they did that. And they came up with 18 quilts.”

The quilts range from one square to nine squares and made a total of 18 hanging quilts.

This was an intergenerational project, Gajewski said.

“It was so many different people coming together in different ways for a project,” she said. “And even though the intended goal was as a fundraiser, it really brought people together at a time when we really needed to get back into the community spirit.”

This process was delayed because of Covid setbacks — otherwise it wouldn’t have taken a whole year to finish. The original plan was to have it done during last school year, Gajewski said.

“We had a lot of Covid shutdown time, so we’re really grateful for all the people who really took a chance and gave their time and talent to this project,” she said.

The King Kennedy Center was created and built with the help of Kent State students in the 1970s in Ravenna’s McElrath neighborhood, said Heather Laliberte, director of grants and marketing at Family and Community Services.

“When the community center was originally built in the ‘70s, there was a dream to also have a recreational facility, like the one we built, that just got completed,” Laliberte said. “They wanted a basketball court and places for kids to just go and play sports and be active. And that dream was never able to really be fulfilled until now.”

The money raised from the auction will be returned to the community center.

“We’re also very grateful that this project was hosted in benefiting King Kennedy Community Center, and it’s a really neat and very fitting project for the facility itself,” Laliberte said. “We’re really excited to get the quilt pieces on display this Thursday and have all of our attendees get to see them upfront, up close and personal.”

The King Kennedy Community Center will host an open house Sept. 8 from 4 p.m. to 7 p.m. Those who can’t attend can look at the quilts online and place a bid at the virtual auction.