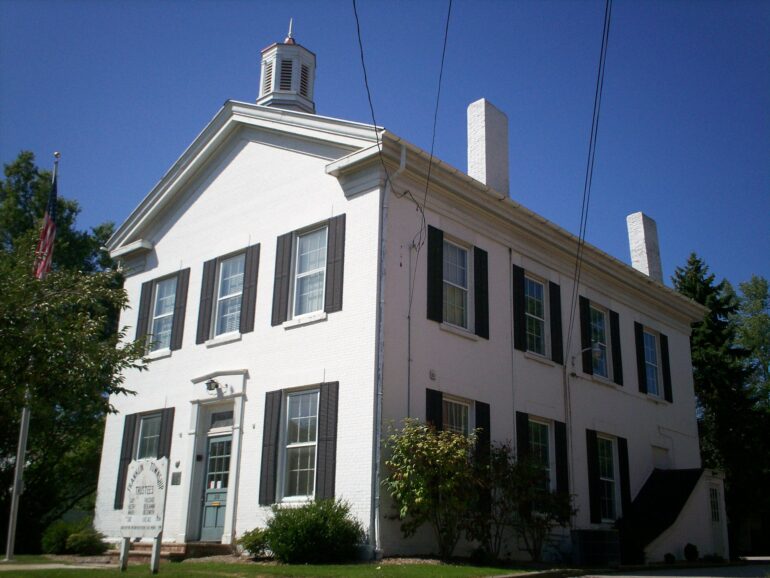 Franklin Township, the only one of 10 communities to miss a Dec. 1 deadline to continue curbside recycling service, is considering legal action against the Portage County Solid Waste Management District.

They say Solid Waste breached an existing recycling contract, which was not only cheaper than the replacement contract on offer but facilitated payments for the township’s leaf pickup service.

Franklin trustees have not yet decided whether to go through with suing the county. The difficulty, Franklin Township Trustee Ann Hanna says, is that the county and the trustees both use the same attorneys through the county prosecutor’s office.

“At this point I think we’re deciding about litigation because they are refusing to uphold a contract through 2024 that they signed with us,” Hanna said.

Ravenna attorney Chad Murdock, an outside counsel who Hanna said is representing the township, is scheduled to attend the trustees’ Dec. 14 meeting. Murdock did not respond to The Portager’s requests for comment.

At issue is a two-part, five-year agreement that Franklin Township trustees and county commissioners (acting in their capacity as the Solid Waste board) signed on May 30, 2019. In it, Solid Waste agreed to provide biweekly recycling pickup and to collect fees for the township’s leaf collection program.

Under the contract, the county collects $87.96 annually from township homeowners. In return, Solid Waste picks up their recycling at the curb while funneling a portion of the fees back to the township to fund the township’s leaf collection program, which is provided by a private vendor.

Solid Waste agrees to return up to $106,800 annually to the township as part of this “leaf rebate.” Each year, Franklin Township Fiscal Officer Lise Russell sends Solid Waste a bill detailing how many residences are served and receives a check from the county auditor.

The contract is effective through Dec. 31, 2024, with automatic annual renewals unless 180 days prior notice is provided by either party, according to the contract.

The Portage County commissioners authorized voiding this contract — along with all curbside service contracts countywide — earlier this year. In doing so, Franklin Township says the county did not observe a contractual requirement to provide 180 days notice before terminating the deal.

Elsewhere in the county

Not everyone is happy about it. County commissioners may be hearing from trustees in Brimfield, who are adamant that each resident should decide whether they want to participate in, and pay for, recycling services.

The village could contract with its current trash hauler, Kimble Recycling & Waste Disposal, for recycling services, but as with the county contract, costs would significantly increase, Village Clerk William Elders said.

“We’re even considering giving up recycling because of cost, although we haven’t gone to the residents yet. It depends what they want or what they’re willing to pay for because we weren’t paying the county hardly anything, and Kimble will want a pretty good chunk compared to what we were paying,” he said.

Village leaders are still weighing their options. Ultimately, Sugar Bush Knolls voters may decide, “but they have to realize it’s a significant increase in cost that we don’t have, so if we do it how do we pay for it, and what are [residents] willing to do,” he reasoned.