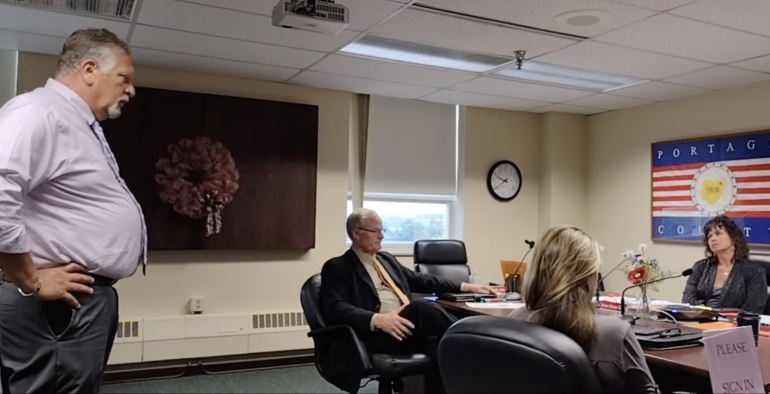 The Portage County Solid Waste Management District is facing a driver shortage that could threaten to reduce pickups to biweekly service, instead of weekly.

“We have five drivers servicing the entire county. A comfortable number would be twice that,” he said. “When people are accepting positions that pay $8 an hour more than they’re making, with 100% medical benefits, it’s tough competing on that level, and a company vehicle.”

Steiner said he has talked to private companies, and learned they are in the same boat.

“Everybody wants to shop online on Amazon, but that comes at a price for the labor market,” Steiner said. “Those fulfillment centers hire 1,500-3,000 people. Their delivery drivers and their truck drivers take all the CDLs out of the market. It’s tough for us to compete against that.”

Steiner said he is trying to cut all communities back to biweekly service. Not servicing contracts at all is not a legal option, he said.

The city of Aurora has already petitioned Steiner to either retain weekly service or cut residents’ costs in half for biweekly service.

Even though its contract with the city of Ravenna has expired, the waste management district has continued to provide Ravenna with curbside recycling. That is about to end, Steiner said. And unless additional drivers can be found, Steiner was adamant that he will not be pursuing new contracts with anyone.

Steiner said a private company has offered to help the waste management district at a cost of $200 per hour per truck, which translates to $2,000 for a typical 10-hour shift. Processing the material would add $40 per ton.

“That’s a little pricey, but at least it’s something,” he said, but he cautioned that outsourcing the job could lead to unintended consequences.

Citing a recent incident involving someone including a can of gasoline with their recycling material, Steiner said, “our drivers know the route. They know what to look for. I don’t want some guy out there just picking up carts and not paying attention.”

Steiner and the commissioners agreed that if the situation does not improve by September, he should inform the communities so they can pursue alternative arrangements, likely a private hauler.

“I don’t foresee any community that has curbside going to drop-off,” Steiner said. “They’re havens for illegal dumping.”

Noting that Streetsboro’s weekly curbside service was recently cut back with virtually no notice, Streetsboro Mayor Glenn Broska requested that every customer in the city be compensated.

“Our contract says we will have weekly pickup for $3.82 a week,” he said. “If we’ve got eight weeks left in this contract, and we’re only going to get every other week, I believe my citizens should be credited for one month of delivery. Send a credit so my citizens are compensated. They should get their money back.”