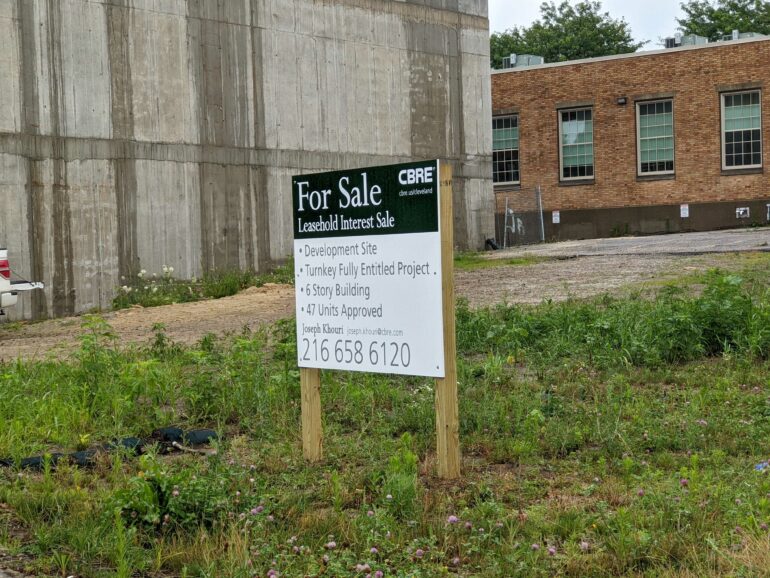 A for sale sign sits next to the new construction on Franklin Avenue in downtown Kent. Wendy DiAlesandro/The Portager

Love it or loathe it, the corner of Franklin Avenue and Erie Street in Kent is not what it once was. But lately there’s been new progress on the development of two parcels there.

At 211 Franklin Ave., where a six-story residential/commercial complex is under construction, supply chain issues had halted momentum for months. But work is now going forward.

And next door there’s a new sign: leasehold interest sale by CBRE. The sign refers to the adjacent parcel, where the developer is selling its lease and building plans.

Construction at 211 Franklin Ave. — a building often referred to by the name of its owner, Badreeyeh Al Hasawi — is finally progressing after months of inaction caused by shortages of windows and framing.

Cranes have been stationed outside the six-story structure, and framing for windows is being installed. The windows are expected to arrive next month, Kent Community Development Director Bridget Susel said. Exterior brick work is also set for next month, she said.

Once completed, the building will house a bakery and coffee house on the first floor, a restaurant on the second floor, and 16 residential apartments (four per floor) above.

The builder does not have a completion date specified, and because of ongoing supply chain issues it is impossible to say when the building will be ready for occupancy, Susel said.

Meanwhile, a proposed 47-unit apartment building that was slated to be erected at 227 Franklin Ave. appears to have stalled.

First proposed to the city in 2018 by Fairmont Properties, Clairmont Development of Ohio is the current developer. Clairmont is leasing the land earmarked for the apartment building from two Ohio companies via a ground lease, which allows Clairmont to move forward with building plans before turning them over to the new owner.

Dean cited the cost of materials and getting those materials within a reasonable time frame as reasons for scrapping the project, which had been named Franklin Lofts.

The property is owned by Bebs Ltd., an Ohio LLC. Kimberly Thomas, a principal at Bebs, says the company will still own the land, but the leaseholder is selling its building plans.

“The Community Development Department is aware of the posting of the property for sale, including that the sale will have approved plans for the 47-unit residential structure previously approved by the Planning Commission, but no one on staff has spoken to the property owner about the sale,” Susel said earlier this month.

As of July 6, the city was reviewing Clairmont’s plans for the fourth time, Susel said. A conditional permit to install footers and the structure’s foundation has lain dormant since May 2, so for now there is no path forward for any work to be done on the site. The company does have a permit for a waterline.

Clairmont is working toward getting approved plans, and once that is done, the plans can be sold along with the property, Susel said.

The .22-acre leasehold is being listed by CBRE, an international commercial real estate firm. CBRE listing agent Joseph Khouri did not return requests for comment.

Correction: Because of an editor’s error, the owner of the 227 Franklin Ave. parcel was identified incorrectly in an earlier version of this article.