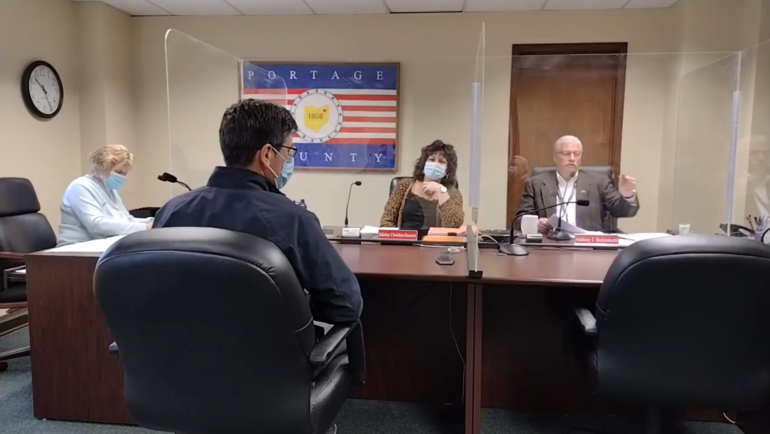 Christian-Bennett is concerned about the sheriff’s swelling price tag: ‘There’s going to be more and more people coming to us for money. … Why shouldn’t they come to us?’ Kline and Badalamenti believe the sheriff’s requests are necessary.

Portage County commissioners voted last week to lease 15 vehicles for use by the sheriff’s office. This week, that $185,940 bill increased by about $4,000 in order to outfit two of the vehicles for K-9 officers.

Money for the vehicles will be drawn from the county’s general fund, which has “adequate resources” to handle the nearly $190,000 expense, acting Finance Director David Lair said.

Lair’s confidence in the county’s resources contradicts his predecessor’s position: Bragg had recommended that all department heads and elected officials like Sheriff Bruce Zuchowski had to live within a budget that was set in December 2020.

Christian-Bennett, who did not vote for the lease deal last week, remains concerned that the commissioners have opened a Pandora’s Box.

Faced with a done deal, Christian-Bennett on Thursday approved an additional $4,000 for the two K-9 cars.

“We fund eight other elected officials, seven judges and 14 of our own departments,” she said. “There’s going to be more and more people coming to us for money. They’ve been willing to work with us and stay within their budget, and now you have someone who’s been given a lot of money. Why shouldn’t they come to us?”

The county’s general fund is swollen now because the county has not done capital improvement projects for two years, sales tax money came in higher than expected and the county received CARES money for Covid relief. Counting on one-time cash infusions to fund ongoing expenses means commissioners will have to make cuts down the road or ask for new taxes.

“So it wasn’t that we didn’t have the money,” Christian-Bennett said. “It’s the fact that we have a budget in place and we ask people to stay within that budget. There’s other wants and needs out there that haven’t been met. Now that this has happened, it opens the door for other people to come wanting money. It puts us in a tough predicament when we’re making decisions.”

Commissioners have repeatedly asked the sheriff to prioritize his requests, which total millions of dollars. Christian-Bennett, though she approved the funds to lease the vehicles, knows  commissioners have to take the long view.

“The money is here now. Will it be there in three years? We have to be able to forecast into the future. Any decision we make now will impact people in the future,” she said. “Those are pretty big asks to be granted when you’ve only been there a few months.”

‘Sheriff has been neglected’

Commissioner Vicki Kline is ready to defend her decisions to fund the sheriff’s office to other county leaders who want more money.

“It’s a lot worse out there than I thought it was as far as vehicles go,” she said. “I had no idea there were so many cars with such high mileage that cover so many miles. I do believe the sheriff’s department has been neglected for a number of years. I have a lot more information now.”

Kline said she had agreed with Bragg’s caution that everyone had to live within the established budget, but she came to believe the commissioners were not getting the whole picture. With Bragg gone, Kline is optimistic that Lair will, and is, providing a different level of communication.

“I think our budget situation is going to be changing,” she said. “I think the commissioners are going to have more information. I think we’re going to be more in the loop. We didn’t always have all the information we needed to make a good decision.”

Kline agreed the commissioners may have to ask for a tax levy to fund some requests, including those of the sheriff. If that happens, she said the sheriff will have to explain himself to county voters.

Even so, not all requests, even those of the sheriff, will be funded.

“You only have so much money. We work with him, he works with us,” Christian-Bennett said.

Once the sheriff has prioritized his requests, the commissioners will discuss bringing sheriff’s office employee wages in line with surrounding counties and municipalities, she said.

Commissioner Tony Badalamenti could not be reached for comment but has supported the sheriff’s requests.

Zuchowski has 14 vehicles that will need to be cycled out. What will be done with them remains in question, though one is being sold to the Palmyra Township Fire Department for $1,000, Lair said, adding that the Crown Victoria is over a decade old and has well over 100,000 miles on it.

The remaining vehicles will likely go to a dealer because that will be easier than dealing with each vehicle separately, Lair said.

Lair said he is examining available funding for the sheriff’s other requests, which include significant salary increases and adding 18 officers to the department’s payroll. He said low wages translate to high turnover.

“What I saw at the sheriff’s office is there were a lot of things that were not keeping up with the cost of living, and the commissioners will have to adjust for this,” Lair said.

As acting finance director, Lair is now tasked with determining how much money is available in the general fund and who, with the consent of the commissioners, gets it. That includes his former boss.

“The sheriff may want more than the commissioners are prepared to give him,” he said. “If the money isn’t there, we’ll have to prioritize. We can only work with the money we have.” Even so, “there’s money in the general fund that’s not been appropriated. I believe there is some money to do some of the things the sheriff wants. The department has been underfunded.”

Bragg, the county’s former finance director, was recently dismissed in the midst of discussions about the sheriff’s requests. The commissioners approved posting his position at today’s meeting. To help Lair run his office, the commissioners also approved bringing in temporary help from Kelly Services, a temporary staffing agency. The county hired the company in 2020 to help Bragg, with positive results, Commissioner Vicki Kline said. It was not clear what the cost would be or for how long Kelly Services would be contracted.

Salary for a new administrator

According to 2019 data based on the 2010 U.S. census, county administrators elsewhere in Ohio were earning from $32,884 to $127,610, Kovick said. Adjusting for population based on the 2010 census, Portage County would need to be in the mid-range of Ohio’s counties, placing a 2019 salary somewhere between $87,900 and $92,375. Any salary for Portage County’s administrator would need to be competitive and adjusted for today’s rates.

“For a department that size that’s not out of line. They have several hundred people working there. That’s a big responsibility. That’s not an unreasonable salary,” Lair said.

The commissioners delayed posting the position until they agree on a salary.

Editor’s note: In an earlier version of this article, we reported Commissioner Vicki Kline as saying she had no idea how many cars the sheriff’s office had. Later, she told us she meant to say she didn’t know there were so many cars with such high mileage. While we typically would not change an accurate quote from an elected official, in this case Kline almost certainly does, in fact, know how many cars the sheriff’s office has, so we’ve updated her quote in this story.