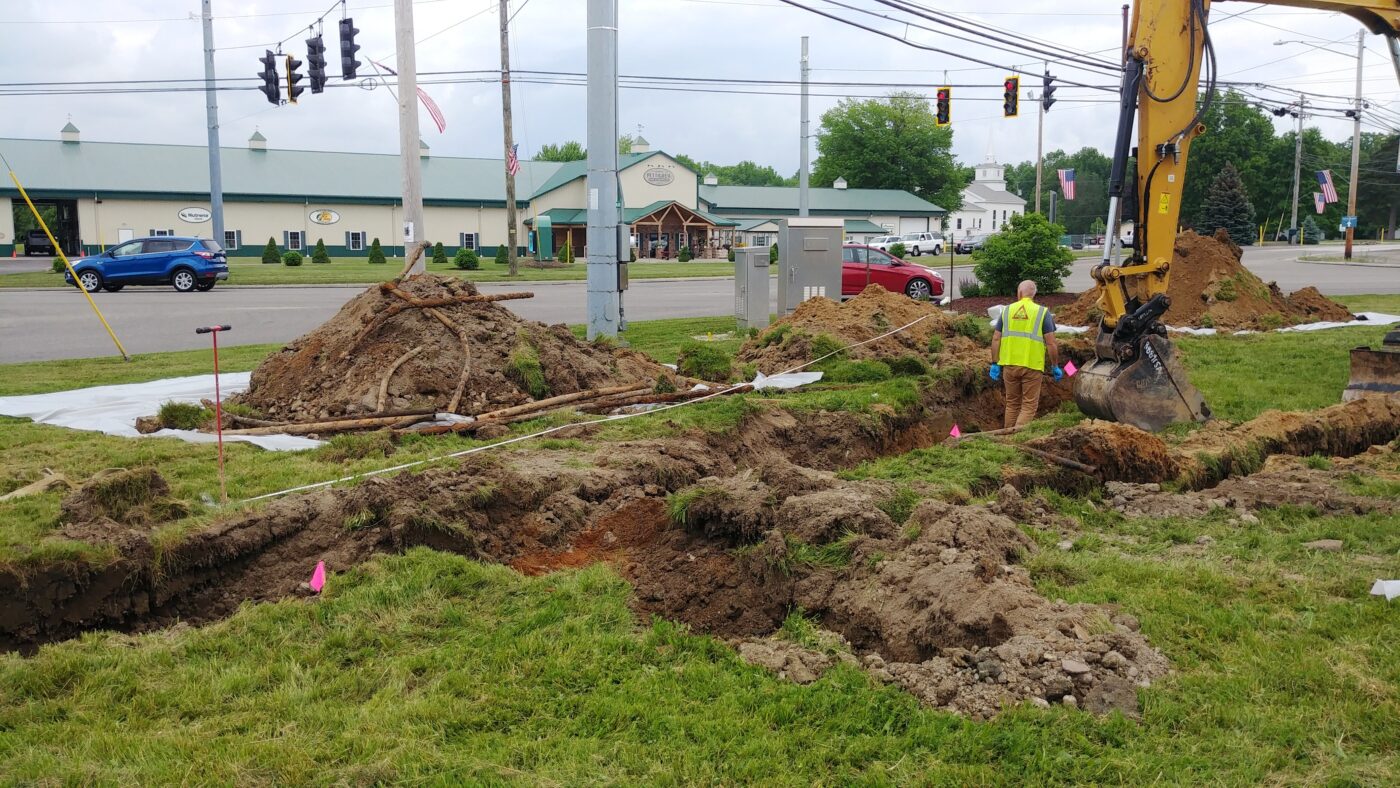 Cleanup begins at the site of a former gas station in the center of Edinburg, a cleanup project led by the Portage County Land Bank. Lyndsey Brennan/The Portager

From the late 1950s and into the ‘90s, Edinburg Township had a gas station in the center of town. Then it was abandoned and eventually condemned, demolished and spent two decades as a vacant lot, too contaminated for redevelopment.

Now the property has a chance to take on a new commercial tenant, thanks to the Portage County Land Bank and a state cleanup grant.

On Monday, a crew began pulling up pipes and searching for any remaining tanks buried at the corner of state Route 14 and Tallmadge Road.

Because the lot had contaminants in the soil, the property was eligible for an Abandoned Gas Station Cleanup Grant offered by the state of Ohio, which the land bank secured earlier this year.

The grant funding has enabled the land bank to remove any uncertainty related to the environmental condition of the property before it is sold on the open market, said Dan Morganti, executive director of the land bank.

The site assessments performed in the coming 6-8 weeks will determine how much more work the property will need before it can be put up for sale, said Paul Kuonen, a geologist with the Brownfield Restoration Group assigned to the project.

The contaminants on the property are not hazardous to people who aren’t in direct contact with the soil, Kuonen said.

The property falls under Edinburg’s town center zoning classification, so a retail store, bank, restaurant, church or another institution or business in compliance with those regulations could be put there.

The project, which is the land bank’s first gas station cleanup and one of its first commercial undertakings, is a good example of the kind of work the land bank does, Morganti said.

“We benefit the community by taking an abandoned vacant site, intervening in some way, and working with partners to get it back in private hands for reuse and redevelopment — and back on the tax rolls,” he said.

Edinburg Township Trustee Jeff Bixler said there is not much interest from the trustees in acquiring the property, which sits across the street from Pettigrew Feed & Hardware, for the township, but if they were to do so, they “would just keep it as a green space.”

Bixler, the former fire chief, said he condemned the property to be demolished in 2002, and the township has maintained it ever since.

“This is going to be a good spot for somebody who wants to be a small business owner,” said state Rep. Gail Pavliga, who attended a groundbreaking event Monday. “It will certainly add to the economic development of this community.”

She wanted to be present for the first day of work on the property, she said, after learning from Morganti the role the land bank plays in “keeping our community cleaned up and on top of things.”

Portage County Treasurer and land bank board chair Brad Cromes said that as the land bank moves into doing more commercial, industrial and rehabilitation work, this project will serve as a pilot for the ones to come.

Getting the property to this point has been in the works for a long time, Morganti said.

When no bidders expressed interest in the land at the sheriff’s sale in late 2019, it was forfeited to the state. The state and the land bank worked throughout 2020 to secure grant funding for the project, and the land bank took ownership of the property in December 2020.

“We’ve been working on this one for a while, so it’s good to be out here to see it finally coming into fruition,” Morganti said at Monday’s groundbreaking event.