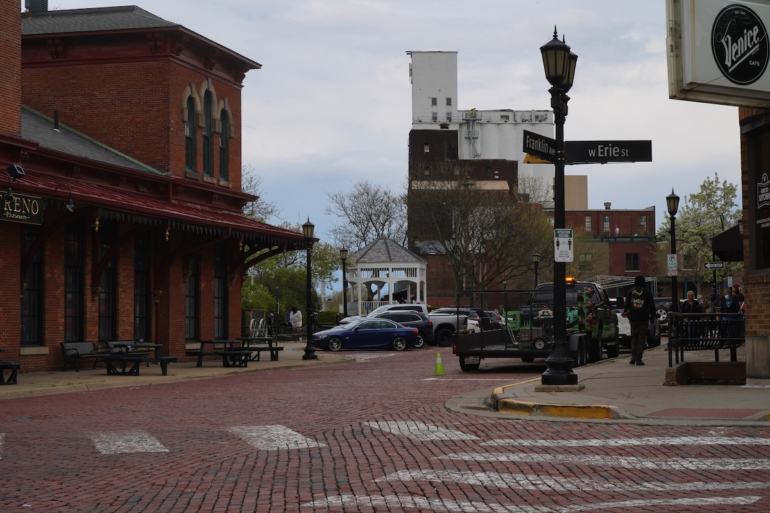 There will be no Kent Heritage Festival this year, and Franklin Avenue will be closed to through traffic starting today, Kent City Council decided this week.

Franklin Avenue will be closed from Erie Street to Main Street from May 7 to Oct. 4 (tentatively). The idea is to provide outdoor seating as downtown businesses struggle to cope with Covid-19 social distancing advisories.

Council will monitor the effectiveness of the road closure and determine the appropriate time to re-open Franklin Avenue.

Franklin is already closed at the other end near the bridge overpass from 12 a.m. to 2 p.m. on Saturdays to accommodate the Haymaker Farmers’ Market. That closure is from West College Street to the Hike and Bike Trail, leaving The Pub’s parking lot open.

It’s all because of Covid, which prompted Council to approve Kent’s DORA (Downtown Outdoor Refreshment Area) last year. This week Council said it may extend DORA’s borders to accommodate additional businesses, but will wait until later this summer to make that decision.

City leaders stated their intention to keep a close eye on the anticipated July 17 downtown Blues Festival to see how the DORA is utilized. If all goes well, one idea is to make the DORA a permanent Kent fixture, even in a post-pandemic world with no Covid restrictions.

And about that Heritage Festival: It won’t happen this year, but there will be a fireworks display on June 26, perhaps with live music as part of the event, Mayor Jerry Fiala said. It’s all in keeping with what City Manager Dave Ruller terms “a new normal” when it comes to event planning.

Also, motorists driving on Franklin Avenue couldn’t fail to notice the new construction on the southeast corner of Franklin and Erie. At the developer’s request, council approved an outdoor seating area for that location, noting that it will not affect the number of on-street parking places other than to add a handicap-accessible spot. Covid’s new normal again.

West Side Fire Station will be renovated

Over the objections of city residents Dave Sommers, Doug Fuller and Paula Treckel, council approved renovations to the West Side Fire Station. The trio, along with Howard Boyle, urged council last month to maintain the historic character of the building rather than to proceed with proposed alterations.

That discussion went as far as Kent City Council revisiting its earlier decision to put a gabled roof on the station, which historically had a flat roof.

Overriding their objections on the basis of time, safety and money, council members went with the gabled roof.

Renovations are necessary because the roof leaks. Conditions in the station are deplorable, council member Garret Ferrara said, and the city’s firefighters deserve better.

Standing Rock Cemetery employees are getting a raise

Council also met with Franklin Township trustees and approved a wage increase for employees at Standing Rock Cemetery. The joint decision was necessary because the city and township share the expenses of operating the cemetery.

Workers at the cemetery are currently paid $4 an hour less than the national average, putting them at near poverty wages, council member Roger Sidoti said.

Citing competition for workers, a pay raise is the right thing to do, council members and trustees agreed.

“I think we should at least pay what they’d get if they were working at McDonald’s,” council member Heidi Shaffer Bish said.

The trustees and council members also considered, but did not approve, raising the cost of burials at Standing Rock. Those rates have remained static since 2013. Even with the pandemic, the number of burials there has not increased, but the number of cremations, which are cheaper to process, have.

Raising burial rates would make Standing Rock less competitive than cemeteries in neighboring communities, DeLeone said, adding that the costs are all relative.

“Relative is the answer,” Kuhar responded, playing on words: “People are going to stay where their relatives are.”

Ferrara agreed, saying, “People aren’t going to go get buried in Stow to save 50 bucks if all their family’s buried in Standing Rock.”

The joint board approved a millage increase that, while it will not affect residents’ wallets, will funnel more funds toward cemetery operations.