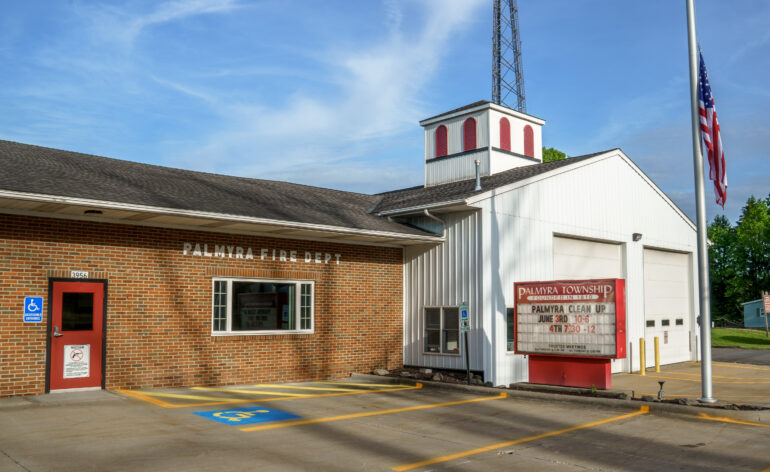 Rootstown just finished installing two columbaria at Homeland Cemetery. Columbaria are structures for the reverential and usually public storage of funerary urns, holding cremated remains of the deceased. Each columbarium that was put in holds 80 urns.

“They’re on concrete slabs, and we stamped them and made them look real nice,” township Trustee Dave McIntyre said. “We’re going to put a bench out there, too. You’re not being buried in the ground but rather in this 4-foot-wide-by-6-foot-tall marble of granite thing. You could take the faceplate off and put the urn inside. We have 80 niches on each columbarium. This is something new to Rootstown, and we’re getting a lot of interest right now. It seems like a lot more people are getting cremated.”

The township is considering putting a sewer into Rootstown Township Park.

“Hopefully, we’ll build restrooms there,” McIntyre said. “The resolution was passed, and now we’re waiting on drawings and the cost of everything. We have to put it all out to bid for the actual sewer.”

Singleton Reels, with nearly a half-century of experience in pallet repair, car and truck specialties, and reels manufacturing, will be opening in a new building on Lynn Road after relocating from Mantua.

Word is that Romeo’s Pizza and Subway may be coming to Rootstown on state Route 44.

“Nothing is set in stone yet,” McIntyre said. “There would be a new building built, and my understanding is that both businesses would be in the same building.”

Leadership Portage County, of which McIntyre is the president, will host “A Night at the Races” fundraiser at 5 p.m. Fri., Feb. 10 at American Legion Post 496 at 1945 Mogadore Rd. Videos of 10 previously televised horse races will be shown, and guests can bet on the horses.

“There will be an announcer. It’s a pretty cool thing,” McIntyre said. “We’re going to have jockey sponsorships and all kinds of different things. There will be a reverse raffling off of baskets, too, and also hors d’oeuvres and dinner will be served.”

Palmyra is working on increasing its fire and EMS coverage into the weekends.

Is 24 hours, seven days a week a possibility?

“We will not go 24 hours, seven days a week in the near future, but that’s the ultimate goal down the road in years to come,” Grund said. “Right now, we’re just trying to cover the busy times when a lot of our volunteers are at work.”

The township is working on doing some upgrades to Palmyra Park to help with the Palmyra Softball League that uses its field.

“We were able to pour some concrete pads for the benches for all the players,” Grund said. “We’ll be looking at possibly doing some painting this year. Within the last year and a half, we upgraded the playground system.”

On Dec. 11, a “Breakfast with Santa” fundraiser was held at the township’s fire station to assist the Fire Department Association.

“It was an outstanding event,” Grund said. “We had 127 people in attendance.”

The menu featured pancakes, eggs, sausage and bacon. The children had their picture taken with Santa, and there was a toy area set up for kids to play in. A coloring book, some crayons and a Christmas ornament were given away.

“The event was very well received with the community,” Grund said.

The township’s website was completely redesigned a few months ago.

“We’re able to get more information out to our residents,” Grund said. “The website is updated on a regular basis now. It’s much more user-friendly.”

Edinburg is hoping to build a new fire station.

“The present fire station is super old. Some of it dates back into the 1920s,” township Trustee Chris Diehl said. “The building is just getting dilapidated. Times are changing, and we need to have better living quarters for full-time firemen with separate bathrooms, showers and all of that stuff.”

A resolution was passed to move forward with an architect to get some firm plans and better drawings so the township can start presenting it to the voters.

“We’d like to have some kind of nice picture-type drawing that we can show the voters what we have in mind. We’re trying to figure out if we can even afford it,” Diehl said. “As slow as things go with architects and so forth, realistically I can’t imagine this being ready before November. In a perfect world, it would be nice to have it ready for May, but I’d be surprised if that happens. There’s no way that our small township can afford to do this without a big help from the voters.”

The new fire station would be built right in the center of town by the gazebo close to the present fire station.

“They redid one of the buildings and created a new showroom within the last couple of months,” Diehl said. “They changed the usage of a couple of the buildings. I think they’re going to build another building, but they haven’t asked for a permit yet.”

Kangaroom Mini Storage, located on state Route 14 behind the Certified gas station, expanded and is looking to put up a new digital sign.

“We’re looking for a side-by-side four-wheeler with a rescue cart for a cot where we can lay someone down and strap them in the back for rescues off-road in the woods and farm areas, which the vast majority of our township is,” township Vice Chair Ed Dean said. “It’s basically a large four-wheeler. Our current four-wheeler is about 30 years old and doesn’t have a cot on it.”

The township is pricing right now. A grant is available in which the grant would pay $10,000, and the township would pay the remaining balance, which it anticipates to be about $10,000.

Easy Motors, a used car dealership at 911 State Route 14 that started up about a year ago, has expanded with some renovations and improvements to the parking lot.

“They take real good care of their customers,” Dean said. “Their sales have skyrocketed and boomed recently.”

Charlestown is in the process of hiring a new custodian for the township’s Town Hall. Applications are being taken now. Linda Dehaven, the present custodian, is retiring after almost 40 years on the job.

Some culverts on Knapp Road were repaired within the last couple of weeks.

The township is making some improvements to the Charlestown Park baseball field, including a new backstop and benches for the players. The upgrades will be done by the time the spring season arrives.

The township had a successful Santa Claus Christmas present delivery with the Charlestown Volunteer Fire Department. Parents brought presents to the volunteer firefighters ahead of time, then Santa Claus delivered the presents to their children at their homes a couple weeks before Christmas.

A Christmas light decorating contest took place throughout the township and went well. The winner will receive a gift certificate.

A project is in the works at the Labelle Heights housing development to redo the storm sewer systems.

“We’ve had an architect come out and do the drawings,” township Trustee Ed Samec said, “and with help from Larry Jenkins at the county, we’re getting things together to start getting the job out for bid.”

“We were able to acquire Issue 2 monies to cover half the cost of the project,” Samec said.