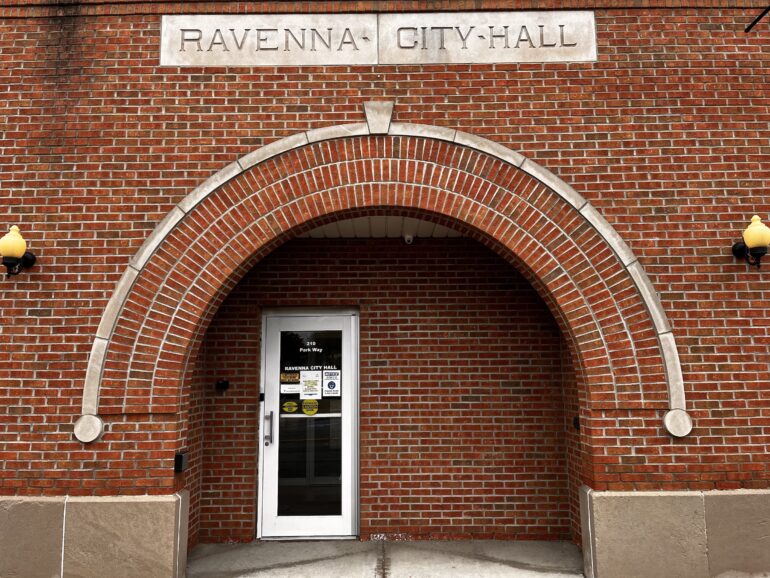 Legislation was passed that is going to repave some of the streets in Ravenna. A Surface Transportation Block grant from the Akron Metropolitan Area Transportation Study will pay for 80% of the project. The streets that will be repaved are South Prospect Street from Main Street to the city limits and North Chestnut Street, both of which will be finished by early summer. Main Street will also be repaved, and most of that will be funded by a grant from the Ohio Department of Transportation.

“The intent is to repave Main Street next year because we’re widening it right now on the west end of town, which includes putting new curves in, moving telephone poles, those kinds of things. There will be new turn lanes in some places, too,” Mayor Frank Seman said. “There are several smaller streets that we’ll try to get repaved in early summer into the fall. We’re trying to do as many as we can. We have a rank order list and go by the ones that need it the most.”

Water lines are being replaced under two streets: Pratt Street from Main Street to Riddle Avenue, which is almost finished, and Page Street. The water line under Main Street was paid by a Critical Infrastructure grant from the Ohio Department of Development, and the one under Page Street was paid with a grant from the Ohio Public Works Commission.

“They’re both well underway and should be finished by the end of January,” Seman said. “The repaving will be done probably by next year. Grants from MAPPS are taking care of the repaving by paying 80%.”

“They’re building two buildings: a production building and a research center,” Seman said. “This is a big deal for us. It’s underway, and their plan is to open for production in September. This will create a lot of jobs. The city had to put a road, Rayann Boulevard, in there to access LG Chem. We had to get a number of grants that paid for the bulk of it. The road is named after Harner and his wife’s first names.”

Ravenna Township signed up with the Portage County Sheriff’s Office for dispatching its fire and EMS effective Dec. 1. Prior to that, the township dispatched with the City of Ravenna.

“Our calls went to the sheriff anyhow, and then the sheriff would send them to wherever they’d have to go,” township Trustee Vince Coia said. “This will help save some time in getting our guys dispatched quicker, and it’s going to save us a little bit of money. This was a long time coming because the previous sheriff was talking about having county-wide dispatch, but it never happened. The new sheriff, though, has been able to purchase the needed equipment to see this through.”

Dave Moore, a firefighter from Kent, was recently hired as a part-time fire chief. Mark Kozak, the previous fire chief, got promoted at his full-time position in Stow.

The township is looking for a part-time zoning inspector and a full-time road department employee. For those interested in either of those positions, visit ravennatownship.com or stop by the township offices on South Spring Street and pick up an application.

At the end of December, some money from the township’s American Rescue Plan Act funds was designated to pay for bathrooms and storage facilities at the new King Kennedy Community Center at 6660 Garfield Rd.

“Instead of going across the parking lot and using the bathrooms in another section of the building, it would be much more convenient to have them there,” Coia said. “We’re donating $80,000 to the project, and the county commissioners are donating around $50,000.”

Giant Eagle’s GetGo gas station at 909 E. Main St. got approved to add a car wash a month or so ago. The car wash will be located where the Courtesy Car dealership used to be.

Haasz Automall of Ravenna, located at 4886 State Route 59, is looking to expand.

“They talked to the zoning department about it,” Coia said, “so that’s going to be coming up in the future.”

Mayor Ann Womer Benjamin presented the 2023 budget last month, and it had its second hearing two weeks ago.

“Hopefully, city council will approve it in two weeks. It’s very significant,” Womer Benjamin said. “We’ve been very fortunate as a community to be able to fund some very significant projects. For this upcoming year, we have about $14.8 million in capital projects that have been proposed. Many of them are focused on improving infrastructure, but there’s also money for some park upgrades. Also in the budget, we’re adding a new full-time firefighter and two new full-time police officers because our calls have increased so much over the last several years. From 2021 to 2022, the calls increased by 10%, which is very significant. Once the budget is approved, we’ll start advertising for the positions.”

The State of the City will take place at 11:30 a.m. Feb. 15 at the Bertram Inn Hotel & Conference Center at 600 N. Aurora Rd. The event will be hosted by the Aurora Chamber of Commerce. Womer Benjamin and Aurora City Schools Superintendent Mike Roberto will be the featured speakers. Lunch will be served, and there is a fee to attend. Those interested in attending can sign up by visiting allaboutaurora.com.

City council approved the purchase of several new, large trucks for the service department but learned two weeks ago that it will not be able to get them because of supply chain issues.

“These trucks aren’t being produced sufficiently to meet the demands,” Womer Benjamin said. “We may be able to get one. So we’re looking to find another place to purchase big equipment like that.”

The police department received a $55,000 grant for body cameras from the Department of Public Safety, which is the largest amount awarded in Portage County in this awards cycle other than to the sheriff’s office.

“Nero was great,” Womer Benjamin said. “I expect we’ll be replacing him.”

Vickie Yendriga, longtime community relations officer in the police department, retired at the end of last year after 33 years of service.

“Officer Yendriga did a tremendous job working with the community and managing a significant number of outreach events and support services for the community,” Womer Benjamin said.

The city has successfully negotiated contracts with four of its five unions, with city council approving all four of those contracts. The four unions are sergeants, dispatch, patrol and service.

“We have one more contract we’re hoping to tie up, and that’s the fire department,” Womer Benjamin said.

The State of the City will take place at 11 a.m. Feb. 15 at St. Joan of Arc’s Stenson Center at 8894 State Route 14. The public is invited, but there is a fee. Lunch is included. Mayor Glenn Broska will highlight the city’s accomplishments and his vision for Streetsboro’s future. This year’s theme, “Keep Moving Forward,” spotlights the strength and determination of the Gateway to Progress City. Those interested in attending should contact the Streetsboro Area Chamber of Commerce.

City council reviewed the first renditions of the Streetsboro Community Center that is going to be built at City Park adjacent to Field Seven.

“We’re getting close to going to the planning commission with the site plans,” Broska said. “We’d selected our construction manager, and they’re working on the estimate for us. Once we decide exactly what amenities we’re going to have, once we get a gross maximum price on them, we can really start to move forward. That’s when you’re going to see things start happening.”

Construction of the community center will start in early spring.

A ribbon cutting was held Jan. 12 for a new business called Spirit Light Yoga at the Hampton Inn & Suites. The event featured an open house and champagne toast. Owner Shirkendra Dancy will conduct sessions in person at a client’s preferred location or virtually.

An ax-throwing business will open soon in Market Square Plaza and will feature leagues.