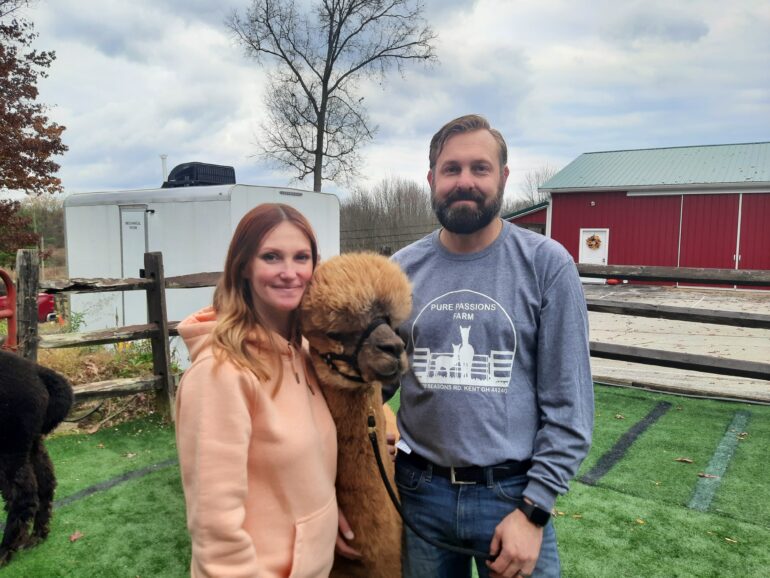 Wtow residents Sigga and Scott Westberg with one of their alpacas at their Pure Passions Farm in Franklin Township. Mark Baxter/The Portager

When their neighbor objected to their three pet alpacas, Stow residents Scott and Sigga Westberg started a journey that has led them to their very own alpaca farm and attraction.

On Oct. 29, the couple welcomed more than 300 people to their Pure Passions Farm in Franklin Township when it opened its doors to the public for the first time.

“I worked on a llama farm when I was at high school in Wisconsin 25 years ago,” said Scott, 43. “Ever since, I have been hooked on alpacas and llamas.”

Now the couple — along with 15-year-old son Magnus and new family member Sylvia, just 8 months old — have poured their energies into opening their farm to visitors and offering an immersive experience with their growing herd of alpacas.

It was an unexpected career move for them both, as Scott had worked with Family Video for a quarter of a century, moving around the country as needed.

“Wherever we moved to, I found a farm to help out at along the way,” he said. “Family Video moved me to Stow about five years ago, and shortly after, we bought three alpacas of our own.”

Sigga said there was nothing in Stow’s laws that said they couldn’t have alpacas, “so we thought, ‘Why not?’”

But their love of the South American member of the camel family was not shared by their neighbor, who considered them livestock. Shortly thereafter, the Westbergs found the 4.5-acre Pure Passions Farm and lodged their three beloved pets there, along with the owners’ own alpacas.

“Our animals lived there for nearly four years, when the owners decided they were moving back to Tennessee where they are from,” Scott said. “And as we were already friends, they gave us the opportunity to purchase the farm from them, and we bought it in April.

“Family Video had done me really well and it was really tough to leave that company, but I had already started buying rental houses in Akron, which gave us the freedom to give up my W2 job paying the bills to do this.”

The project is truly a family love. Sigga, 31, gave up her job with Meijer to become a full-time husband-and-wife team, and they gained the keys to the farm just one day after Sigga gave birth to their daughter, Sylvia.

Big brother Magnus, meanwhile, has proven to be a valuable member of the family farm team.

“He is quite the alpaca whisperer,” Scott said. “He caught the whole herd all by himself when I needed to give them shots.”

The Westbergs say that alpacas come with certain advantages.

“Alpacas are just calming to be around,” Sigga said.

“They do have a very calm nature,” her husband agreed. “They are also hypoallergenic. I am allergic to many animals, and as an animal lover they are perfect for me.”

Weighing in at around 150 pounds, an alpaca is about half the size of its direct relative, the llama, and comes in two distinct breeds: Suri, noted for its dreadlock-style hair, and Huacaya, which has a fuzzier coat. The Westberg herd is Huacaya.

Alpacas first arrived in the U.S. about four decades ago and were originally a rich person’s interest. But today, Ohio has more alpacas than any other state.

Scott said they are a very low-maintenance pet despite their size, as they eat about half a bale of hay a week and toilet in the same place every time.

“I am an entrepreneur and a businessperson,” he said, “so this was a natural progression for me from Family Video, where I helped start several businesses.”

As well as farming their own 21-strong alpaca herd for the animals’ highly sought wool, the Westbergs board other people’s alpacas at the farm, complete with 24-hour video feed. The herd recently welcomed four alpacas that the Westbergs took in as rescues.

Scott said the farm will bring an alpaca to an event for customers and boasts an event space for up to 100 people for parties. There is a quiet balcony overlooking an alpaca field where small groups or couples can enjoy the sunset, or options for a fire pit or cookout. He is interested in developing educational programs as well, and photographers have shown strong interest in using the venue as a backdrop.

The alpacas are getting used to sharing their space. This week, a herd of goats joined the fun, and one customer lodges her ducks and geese at Pure Passions Farm.

“We are looking to breed the alpacas and sell the babies,” Scott said. “The cool thing is I love educating people on alpacas, and I cannot get enough of the expression on children’s faces when they feed them.”

Sigga and Scott now have their sights set on the pet sector of the alpaca market, with hopes of breeding higher-end animals for the show circuit later.

“The thought that you can say to someone in a town that wants that farming atmosphere that you can buy an alpaca for just $1,000 and board it for $150 a month, and you can visit and pet it and relax with it whenever you want, is great,” he said. “You are really buying an experience.” 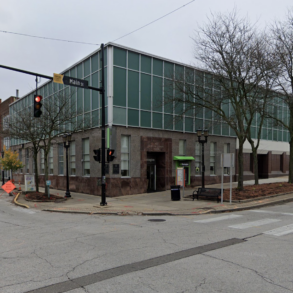 Huntington Bank will close its Kent branch, no immediate plans for the building