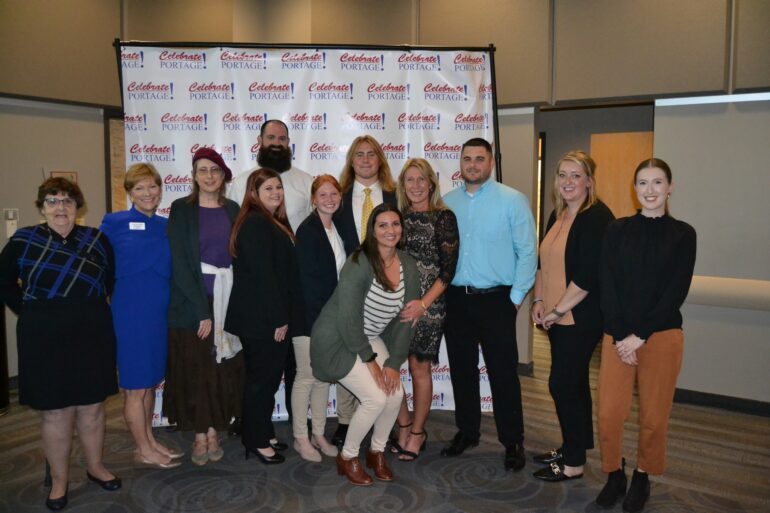 Below we’re briefly profiling each of the winners and nominees for each category.

Celebrate Portage! has a steering committee comprising individuals across a variety of fields. The group determines the winners, basing their votes on which nominee’s submission best describes the spirit of each award category.

Celebrate Portage! will begin accepting nominations for its 2023 awards in January. To nominate a person or organization, visit CelebratePortage.org/nominations. All applications must identify a primary point of contact. Nominees cannot receive awards in consecutive years.

County Commissioner Sabrina Christian-Bennett presented Mila’s Hope and Rowyn’s Dreams Playground with the Community Improvement Award, which honors efforts to reveal and enhance the underlying identity of a community in Portage County.

Susan Monegan, a community member and grandmother of a special needs child, realized Portage County did not have an all-inclusive playground. She decided to do something about it, and the playground opened in Randolph in September 2021.

The third nominee for the Community Improvement Award was Ravenna’s The Main Street Mile, an effort developed by Main Street Ravenna Vice President Chelsea Gregor to promote the county seat.

Open Arms Adoption launched its adoption program for children with special needs in 2021. The organization devotes resources to locate prospective families that are willing to undertake training and care for special needs children.

Also nominated for the Community Service Award were Kent State University’s Habitat for Humanity chapter. Its vetted students gave up their Saturdays in 2021 to work on job sites, helping to provide homes for those in need of safe, decent and affordable housing. The group also engages in fundraising to make donations to Habitat.

The third nominee was The Portager for its work in covering local government, businesses and nonprofits, schools, and things to do around town. If you’re reading this, no further explanation is needed!

Streetsboro Mayor Glenn Broska presented the Community Development Award to Buckeye Quality Meats for its part in benefitting a local or regional economy in terms of employment, income and quality of life.

Streetsboro’s old Shell Station was originally slated to become a sandwich shop, but Streetsboro leaders convinced the owner that a butcher shop would better serve the area. Buckeye Quality Meats, which has generously donated to the city’s food pantry and the Streetsboro’s bicentennial, was the result.

Also nominated was Moffett, a subsidiary of Hiab, which makes three-wheeled forklifts. City leaders worked hard to convince Moffett to locate in Streetsboro instead of in Texas and Georgia. Moffett’s opening is expected to bring at least 100 new jobs to Streetsboro.

Garrettsville Mayor Rick Patrick presented the Health Initiative Award to The Mental Health & Recovery Board and Coleman Health Services: Crisis Intervention Team, for their part in providing all people with tools to reach their full potential for health and wellness.

Children’s Advantage: Celebrating Families helps families that have been affected by addiction to heal. Participants can meet with clinical trauma specialists and enjoy family meal time in a comfortable atmosphere. The program helps families process their emotions, grow and begin to build resilience.

Townhall II’s Let’s Talk About it: Mothers in Recovery Support Group brings mothers together on a monthly basis to discuss issues that only other moms in the same situation could understand. The space provides mothers in recovery with a safe, understanding and judgment-free platform.

Kent DECA students Cameron Lantz and Brandon Melin chose Coleman Health Services as their DECA project to help raise housing funds for youth that age out of foster care in the Kent area. Mission: Hope and Housing raised $2,365 to help the many young adults who end up homeless and on the streets after aging out of the system.

The students plowed the area, installed fencing, helped with promotion, and joined a planning committee to address the garden’s zoning, guidelines, and future. Even after graduating from SHS, some students have remained active with Streetsboro Community Garden.

Portage County Treasurer Lori Calcei presented Edie Benner with the Community Hero Award, which recognizes a person in Portage County who has demonstrated courage, strength and self-sacrifice in community service.

A Mantua native, Benner saw her village falling into disrepair. She founded the nonprofit Downtown Mantua Revitalization Corporation in 2007, and has served as its president ever since. Under Benner’s leadership, the DMRC has contributed more than $100,000 in matching funds for Village grants, Headwaters Trail, Buchert Park walking trail and sidewalk renovations. DMRC has also managed purchases of memorial benches, furniture and other community improvements.

When the Covid-19 vaccines became available in 2021, Melanie Dundon was adamant about getting an appointment for her mother. She soon realized how difficult it was for most older adults to navigate the system, so she started making appointments for colleagues and community members.

When word got out that Dundon had “magic” when it came to getting appointments, hundreds of people began contacting her. Dundon dedicated herself to scheduling appointments for as many people as she could, and said she heard people cry with happiness and relief when she was able to tell them when their appointments would be.

Jerimiah Greathouse tirelessly volunteers his time and equipment to help Streetsboro’s senior citizens and people with disabilities. Whether it’s yard work, leaf removal or snow plowing, he makes it happen.

Besides being actively involved with township zoning, Jordan F. Michael has championed all things Rootstown for years. His volunteer activities include ringing a Salvation Army bell in December, coordinating Light Up Rootstown and community decorations, and organizing, constructing, and volunteering at the township’s county fair and Expo booths.

Pastor Dennis J. Richey Sr. has been a civil rights activist for 40 years. A senior pastor at Winfield Church of God in Ravenna since 2012, he has advocated for improvement to the King Kennedy Community Center and for homes to be built in Ravenna’s McElrath neighborhood. Richey was also one of the first members of Ravenna’s Equity and Inclusion Task Force.

He is a Silver lifetime member of the NAACP and is involved with the National Action Network, People United to Save Humanity and the Portage County Minority Health Task Force.

In 2021 he vowed not to cut his hair until police stopped killing unarmed Black men and women. He cut his hair in April 2022 but says he remains active, trying to get the George Floyd Policing Act and John Lewis Voting Rights Advancement Act passed.

Celebrate Portage! relies on its volunteer steering committee, whose members ensure that people and groups who make the county shine receive the recognition they deserve.