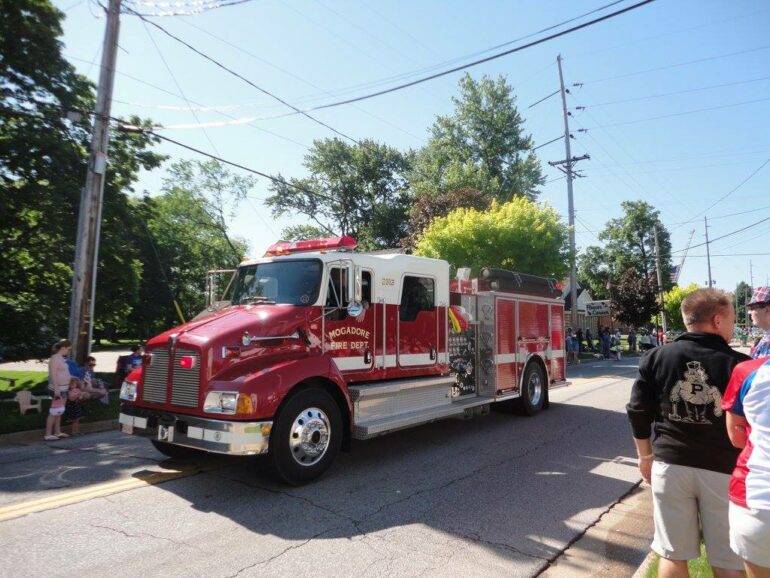 For the last 30 years, Mogadore has had a full-time EMT/fire chief, but the rest of the fire department has been part time.

“We’ve been having trouble filling the shifts. That’s a lot of part-time people trying to fill 24 hours, seven days a week,” Mayor Mike Rick said. “So last year, village council asked the community if they’d pass a $3.5 million levy to get us five full-time EMT/firemen. And we also received a SAFER Grant from the federal government.”

Because of both the levy and grant, the village is hiring five full-time EMT/firefighters. At council’s last meeting Dec. 20, three of the five were sworn in. They are Shawn DeWolf, Nolan Jones and Angelo Amatangell.

“We’re in the midst of interviewing and going through the process of hiring the other two,” Rick said. “Hopefully, within the next six weeks we’ll have them hired. This is going to help keep our station staffed 24 hours, seven days a week.”

The Mogadore Historical Society will have a soup and sandwich fundraiser luncheon from 11:30 a.m. to 1:30 p.m. Feb. 8 at the Russell M. Pry Community Center at 3857 Mogadore Road. Different rates are charged for different sandwiches, but usually a good lunch can be had for less than $10.

Suffield passed a resolution to put out a bid to get a new fire truck, which would replace a 1994 fire truck.

“The new truck would have many more things on it than the old one,” township Chair Jeff Eldreth said.

There will be a chili cookoff at 6 p.m. Feb. 4 at the Suffield Lions Club at 1128 Waterloo Road. The event is a fundraiser for the Randolph-Suffield-Atwater Food Shelf. The sponsors are the Lions Club, the Suffield League and the Suffield Historical Society. People entering chili in the contest must arrive by 5:30 p.m. The winner will receive a trophy. The entrance fee to attend is $5.

The Suffield League will hold its “Laugh at the Lake” event at 6 p.m. March 11 at St. Nicholas Orthodox Church at 755 S. Cleveland Ave. Three comedians will perform, and there will be dinner, a Chinese auction and a 50-50 raffle. It is the Suffield League’s biggest fundraiser of the year. The entrance fee is $50 per person.

Atwater accepted the Ohio Fire Code because there are now four people trained to do fire inspections on the township’s fire department.

“We needed to adopt the code, so that’s part of what the four people have to go by,” township Trustee John Kovacich said.

“It’s a networking get-together and dinner type of thing,” Kovacich said. “We usually get between 14-16 of the 18 townships in the county represented.”

A “Heart to Heart Wellness” event promoting community wellness will take place Feb. 16 at Waterloo High School. There will be several medical people there as well as food and door prizes.

“The gist of it is we pack boxes the size of shoe boxes with gifts that get shipped all around the world,” church Pastor Bill Johnson said. “We did almost 1,000 boxes this year.”