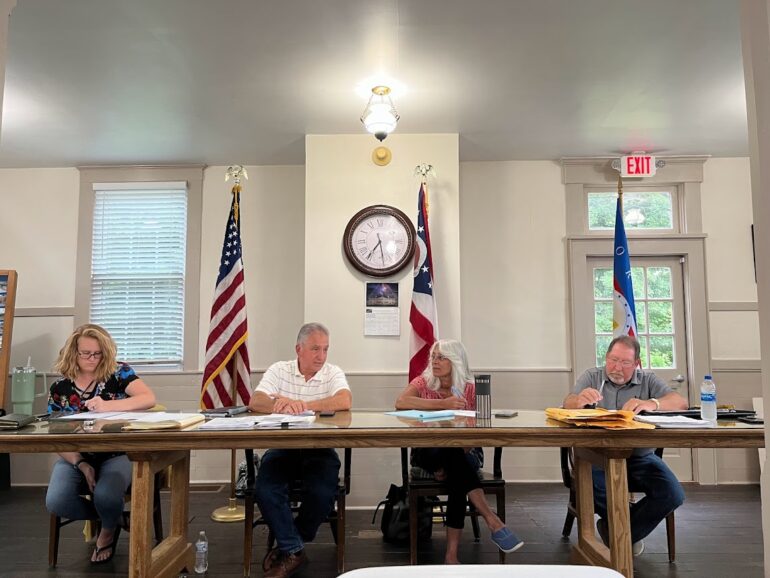 “We started it in 2019, but because of Covid and the price changes of everything, everything was put on hold,” township Trustee Jeff Derthick said. “We’d applied for a grant from Ohio Public Works, and we’d received the grant. It’s a 50% grant match.”

“We got a couple bids on it, but they were all over our budget,” Derthick said, “so we had to rebid it, and we finally got a company to bid on it that we were able to choose. They’re supposed to start in January and finish in early spring.”

The township received another grant from Ohio Public Works to replace a collapsing culvert on Asbury Road. The project will go out for bid in the spring, and work will start on it in early June.

The War Memorial that was blown over and ruined in a storm before Covid is being replaced and is about 80% done. All the names of the Freedom Township residents who served in any war all the way back to before World War I have already been printed up on the brick, which is going to be in a patio.

“The names will be on the ground,” Derthick said. “Several months ago the plaques of each division of service were ordered, and they’ve been on back order forever. We’re hoping to have that done in the spring.”

The Freedom Township Historical Society’s one-room schoolhouse has been renovated.

“We received a $50,000 grant from the Ohio Public Works Commission,” Derthick said. “They put a new roof and new siding on it and also put up a utility building for storage. It’s about 90% done. The Historical Society has its meetings in the schoolhouse, and they’ll do programs in there.”

Through a grant from Regional Planning, the front stairs will be redone, and some other concrete work will be done around the schoolhouse.

The township held its “Cookies with Santa” at Town Hall the night of Dec. 10. Santa Claus showed up, and the 100 or so children who were there got their picture taken with him. There were cookies, chocolate-covered pretzels, coffee, hot chocolate and hot cider. There were also donations of coloring books and crayons from Shortie C’s Bar & Grill. The sheriff’s office and the Community EMS showed up.

And, to top things off, “the sheriff’s office brought its dog,” Derthick said.

Mantua Township finished its flood study a couple weeks ago. The township received a $147,000 grant for the study from the Ohio Department of Natural Resources and the Federal Emergency Management Association. The study was provided by Osborne Environmental.

“We’ve had flooding in our low-lying areas, and they’ve come up with some suggestions,” township Chair John Festa said. “Those will be taken into consideration, and we’ll probably use that information to apply for other grants. We’re going to make concerted steps along the way to try to alleviate some of the flooding.”

A new HVAC and a whole-building generator were recently added to the old Mantua Center School.

“It’s all been brought up to current standards,” Festa said.

The township recently purchased a new addition to its service garage.

“It was a big deal,” Festa said. “The new addition houses our equipment and those types of things for the service department.”

The township approved a new memorial at Westlawn Cemetery for Civil War and World War I veterans.

A new mini storage business is scheduled to open on state Route 44 in the spring.

Garrettsville Nutrition, located at 8126 Main St., has new owners. The building has been remodeled, making it more user-friendly.

“You can now go in there and sit and relax,” Mayor Rick Patrick said. “They have a couple tables where you can go in and get your drinks and sit and enjoy them. Before, it was mostly just in and out, people getting their drinks to go.”

Coffee and hot chocolate have been added to the menu.

Aaron King recently purchased SkyLane Bowling and Sky Lane Drive-Thru, which are both located at 8311 Windham St. by Sky Plaza. King was previously the manager of both businesses.

The village is considering adding a pickleball court and renovating the tennis court at Craig Moser Park on Park Avenue. Meanwhile, village council decided to dedicate the park to Craig Moser, who was the mayor prior to Patrick and passed away while in office.

“It was my idea to name the park after Craig,” Patrick said. “It’s kind of neat because the park is just a couple of doors down from where his residence was. They just put the sign up about a month ago.”

The township recently sold its township garage at 11588 Ryder Rd. to Jimyz Automotive.