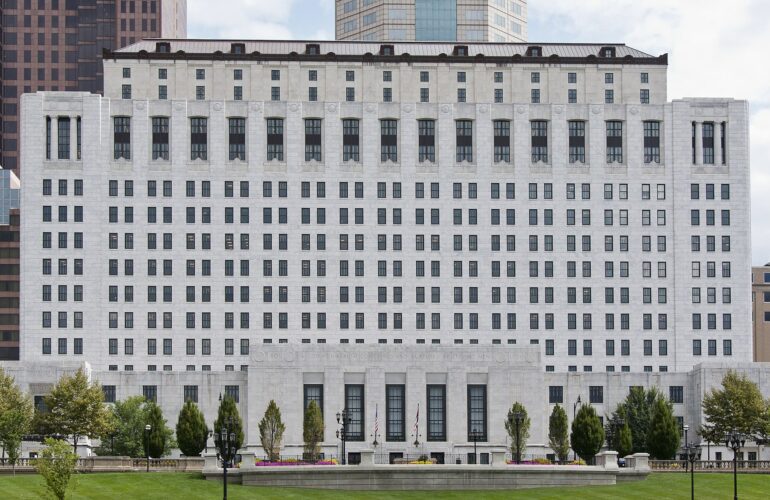 The Ohio Supreme Court ruled Wednesday that the Portage County commissioners made an “impermissible end run around the Open Meetings Act” during Solid Waste Management District board meetings in 2019.

Wednesday’s decision overturns a Sept. 8 Portage County appeals court ruling that said the commissioners did not violate the act.

Brian Ames, who has been known to challenge local government bodies in court over possible Open Meetings Act violations, brought the case against the commissioners in December 2019, saying they used what is known as a consent agenda to quickly and discreetly rubber stamp resolutions.

By using consent agendas, the commissioners were able to “conceal a lot of the county business,” Ames said in an interview. “Anything they didn’t want the public to know about would go on the consent agenda — and a lot of the items were being placed on people’s taxes.”

Court documents state the Solid Waste Management District board, consisting of the three Portage County commissioners, adopted the consent agenda procedure in 2019. This allowed the commissioners to combine routine business items, such as paying bills or approving meeting minutes, into a single item. A yes vote would approve everything on the list.

Ames argued that the commissioners applied the word “routine” too broadly.

Commissioner Vicki Kline, who was on the board during the period under scrutiny, said she and her colleagues have already stopped using consent agenda procedure.

She added that the case “has been going on for years, so I’m just glad that issue is finally resolved.”

The meetings in question before the Supreme Court took place Sept. 17 and 26, 2019. Each one lasted less than two minutes and involved three resolutions apiece, which were passed without discussion.

Ames subsequently filed a public records request to obtain the minutes of those meetings. The minutes contained the language of the resolutions, and one of them referenced an exhibit that was not included in the documents responsive to his request.

The same day he received the records request, he filed a motion asking the common pleas court to issue a writ of mandamus, a type of court order, against the waste management board that would have compelled them to supply the missing exhibit and stop using consent agendas to conduct their business.

The court denied Ames’ petitions, and he appealed to the Supreme Court.

This case represents the “tip of the iceberg,” he said, alleging that the commissioners have violated the Open Meetings Act hundreds of times. He said he picked this case to appeal to the Supreme Court because it addressed characteristics of the law that were present in other cases.

“The important thing is, if someone attends a meeting, they need to know what’s going on. The public needs to know what their elected officials are doing so they can hold them accountable. If you don’t know, then all you have is like a beauty contest out there at election time, and you don’t have any facts to decide whether these are good people or bad people,” Ames said.

Clarification: The original version of this headline stated that Portage County commissioners violated the Open Meetings Act. But the Ohio Supreme Court’s ruling was in fact less committal: They state that “as a matter of law,” Ames’ allegations are correct that a violation occurred, and they have left it to a lower court to make a decision after gathering further evidence.