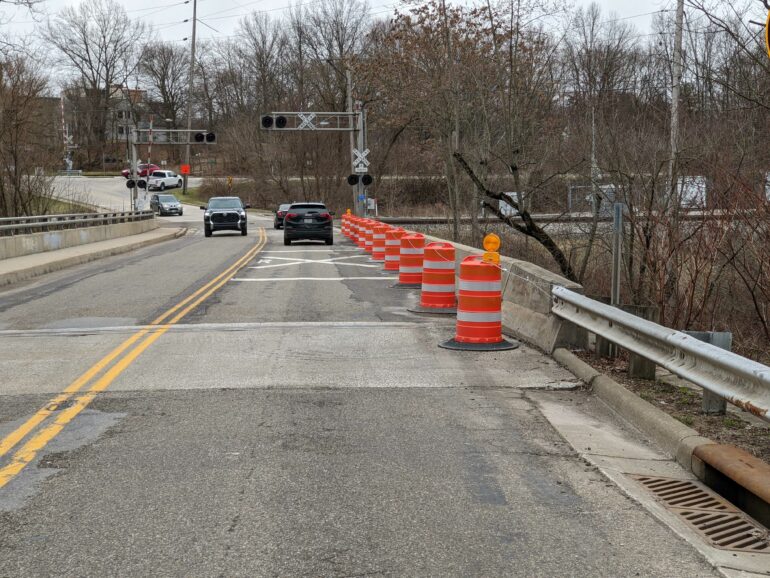 The lanes of the Stow Street bridge in Kent have been narrowed to prevent further damage after the county engineer discovered minor degradation. Wendy DiAlesandro/The Portager

On Monday, we reported that the Stow Street bridge in Kent is being narrowed until county engineers have a chance to evaluate and possibly patch up some minor degradation.

But the Stow Street span wasn’t the only roadway flagged in the Portage County Engineer’s Office’s annual inspection last fall.

Johnson Road in Franklin Township is closed between Hudson Road and Newcomer Road until further notice. The closure is at Bridge 107, approximately a mile west of Hudson Road.

Newton Falls Road in Ravenna and Charlestown townships is closed between Peck Road and Garrett Road, at Bridge 126, approximately a half mile west of Garrett Road.

Additionally, the Ravenna Road bridge near Towner’s Woods has been closed since 2017, but design plans are nearly complete and construction is set to begin in late 2023, with a finish date in 2024, Chief Deputy Engineer Larry Jenkins said.

“Bridges last 30-70 years, depending on what was existing,” said Project Engineer Mike Collins. Knowing that, the engineer’s office conducts annual inspections of all the county’s bridges.

One bridge on Silica Sand Road, just west of Colton Road in Windham Township was replaced last year, having “outlived its useful life.”

Another Silica Sands Road bridge, this one just east of Windham-Parkman Road, is scheduled for replacement in 2023, again because it had outlived its useful life. A truss bridge, it was built in 1950.

The problem with the Johnson Road bridge is that one of the two load-bearing pipes beneath it rusted, adding that structure to the “outlived its service life” list, Collins said. The bridge is scheduled to be replaced this summer. The bridge, built in 1991, was closed earlier this year.

“It was a corrugated metal pipe,” Portage County bridge engineer Bill Vermes said. “They’re economical, but they do not last as long as other structures. We’ve developed new types of culverts in the last 30 years that are much better structures to put in those situations.”

The Newton Falls Road bridge was built in 1974 and closed in early 2021. This time the “outlived its useful life” phrase refers to the bridge abutment washing out and generally deteriorating, Collins said. The engineer’s office expects to replace the bridge this summer.

The Ravenna Road bridge near the Towner’s Woods parking lot has been closed since a load rating analysis revealed that the span was not safely handling vehicular traffic, Collins said. The bridge was built in 1983. Construction will begin in 2023 and continue into 2024, when the bridge will reopen.