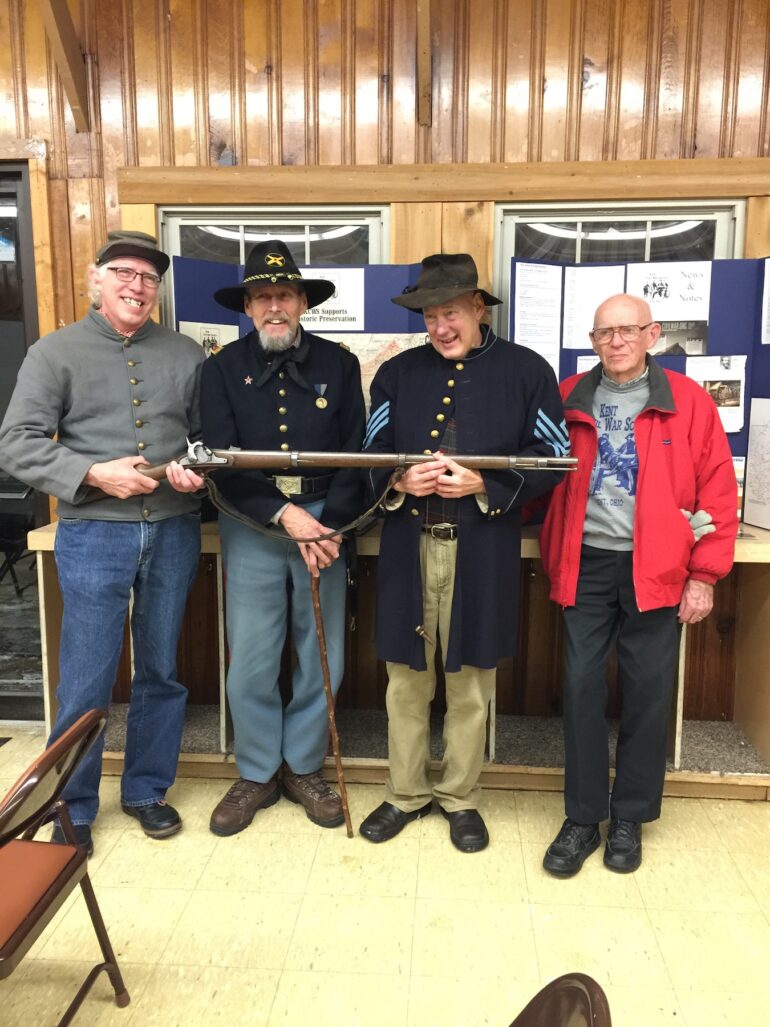 Kent’s Civil War Society is back in action after a Covid hiatus of over a year. The group, celebrating its 30th anniversary this year, is looking forward to its second in-person meeting Oct. 12 at the Roy Smith Shelter House in Fred Fuller Park.

This month’s meeting featured a National Park Service video, “Manassas: The End of Innocence.” There was also a five-item silent auction of books, videos, prints, bullets and other objects recently donated to the group. A portion of the proceeds were donated to battlefield preservation and education.

The meetings are free and open to the public.

Though some members are Confederate or Union reenactors, KCWS focuses on sharing history and information about the Civil War, says member Andrea Shearer.

Most members are not history professors or teachers, Shearer said. Instead, they are average people with a variety of backgrounds whose interest in history draws them together.

Far from debating historical interpretations of the war, members aim to share new facts historians continue to uncover, interesting stories and new insights that come to light as people become interested in different aspects of the war.

Shearer recalls staring at pictures of Washington and Lincoln in her elementary school classroom and becoming fascinated about the nation’s 16th president.

Fast forward to adulthood and a career as a dance teacher at Kent State, she listened to the audio book A Confederate in the Attic, by Tony Horwitz. Shearer was hooked and learned about the Kent Civil War Society.

She, along with the other members, simply love learning. Somewhere along the line we all learned about the Battle of Gettysburg, but Shearer dug deeper, wanting to know what life was like for the civilians who had to endure the drama and carnage surrounding them.

“It’s not like you sit in a classroom and they tell you dates,” she said. “It’s really much more about the people behind the battles, how the thing was structured and different elements of the war. For me, it’s more storytelling than anything else,” she said.

The society’s webmaster, Mark Perkins, learned about the group while he was engaged in Civil War re-enactment events in the early 1990s. Ever since, he’s been intrigued to learn about how common, everyday soldiers got through the experience.

“Some people may have had an ancestor in war so they want to learn more about it or pay tribute to the ancestor in some way. We have some people who have been studying about it for all their adult lives,” he said.

Most of the group’s 40-50 members are from Kent and surrounding communities, Shearer said.

Typical meetings see about 20-25 members and guests from across the state presenting information, discussing books, a “show and tell” of artifacts, an auction of civil war books and related items, and other historical and social events, she said.

“Some of the members will bring in artifacts, like weapons, bullets (miniballs), and we once had a member who was a doctor, so he had a collection of the kinds of tools they used at that time,” Shearer said.

Each meeting also includes the passing of a tin cup, with members donating whatever cash they can to promote the preservation of Civil War battlefields, flags, cannons, headstones and historic sites.

Since 1996, the group has donated over $6,000 to organizations in Kent (The Wells Sherman House and Lilac Gardens Preservation), around Ohio (Save the Flags campaign and Save-A-Soldier Photograph Preservation), and across the country (General James Longstreet Memorial Fund, American Battlefield Trust Teacher Institute).

The Kent Civil War Society meets the second Tuesday of each month at the Roy Smith Shelter House. Because of Covid, formal membership dues are suspended until 2022, Shearer said.

Typical meetings begin at 7:10 p.m. with light refreshments and informal conversation. A short business meeting begins at 7:30 p.m., followed by a brief break for snacks, conversation and viewing displays. The main presentation begins at approximately 8 p.m.

For more information and links to various websites of interest to Civil War buffs, visit the Society’s website: kentcivilwar.org.