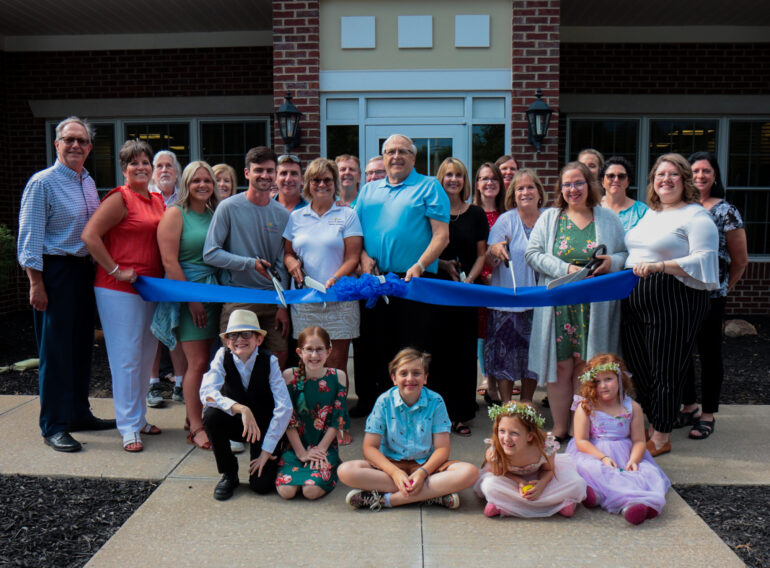 Cathy and Bob Reeves, the mayor of Kent, and other supporters of Kelly’s grief center stand in front of their new building at the ribbon cutting ceremony and grand opening on Thursday, June 10. Sophia Lucente/The Portager

Twenty years after they lost their 16-month-old daughter, and 12 years after they first opened in Kent, Cathy and Bob Reeves have moved their grief counseling center and foundation into a permanent home.

Kelly’s Grief Center is now located at 2275 State Route 59 in Kent, a stand-alone building that offers clientele more privacy than at the center’s previous location in Acorn Alley in busy downtown Kent.

A few months after relocating, the Reeveses held a grand opening and ribbon-cutting ceremony to celebrate Kelly’s Grief Center having its own building. They gathered with their friends, family, counselors and Kent Mayor Jerry Fiala to cut a ribbon in front of the building, while giving tours and offering food and drinks afterward. The mayor presented them with a certificate as well.

Kelly would have turned 20 on the day of the ribbon cutting.

Cathy and Bob said having their own building has allowed them to do what their mission statement is, which is to service people in need.

An added bonus to having their own secluded building is privacy for their clients, Bob added. At the Acorn Alley location, people seeking counseling could easily run into people they knew while walking into the building. “The stand-alone building offers the clientele privacy as opposed to where we were before,” he said.

The grief center and foundation was born out of personal tragedy. In 2002, Kelly Reeves, the 16-month-old daughter of Cathy and Bob, passed away after choking on a pretzel during a car ride. The family, including Kelly’s parents and their 5-year-old son, sought out counseling to cope with their grief at Kent’s Counseling for Wellness, where they eventually learned how to live with their loss.

One day, after they were well into their therapy, a friend of a friend called the Reeveses looking for someone to confide in. She had lost her two children to suicide, with no money or insurance for therapy.

After that phone call, they established the Kelly Reeves Memorial Foundation to raise money through fundraisers and donations to provide therapy for those who have suffered similar losses. People seeking grief therapy can get individual and group counseling, regardless of their financial situation or ability to pay, thanks to the foundation.

Cathy said they have raised close to $1 million since they first opened.

The center offers counseling for grief and other mental health counseling. The Reeveses do not turn away anyone because of financial situation or inability to pay.

To donate to the foundation, visit the website at kellysgriefcenter.org, and to contact the grief center call 330-593-5959.