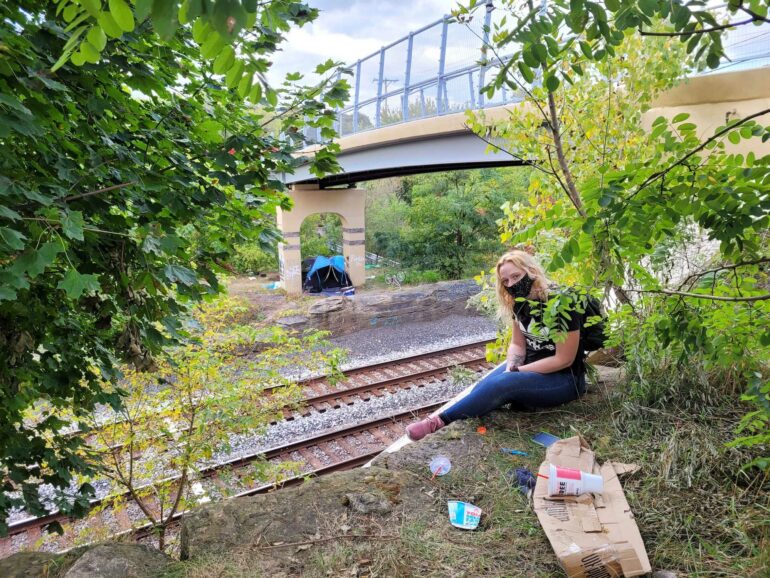 Brittany Corbitt was evicted from a home she was staying in and could not get access to shelter programs. Then she was told she had to leave her tent camp, too. Lyndsey Brennan/The Portager

Kent State Senior Makayla Sejat had a simple idea: The best way to make progress on the problem of housing people in the city is to get local leaders talking to each other about it.

Bolstered by a background in community activism, and motivated by last year’s disbanding of an encampment under the Haymaker Parkway Bridge, Sejat started making phone calls. What took shape was the “Gathering on Homelessness,” as it became known.

Over the past year, Sejat has conducted informal meetings that involved Kent’s police and fire chiefs, Kent’s health commissioner, representatives from the city government and Kent State, the Kent Free Library, PARTA, and Family and Community Services. It’s a rare convergence of some of the most important policymakers in the community.

Sejat intentionally modeled her initiative after the town-and-gown approach, which encourages city and university leaders to work together to pool knowledge and resources.

“I am providing space for officials to have an open discussion about homelessness because what I’ve found is that nobody could give me a correct answer on what homelessness looks like in the City of Kent,” Sejat said. “Everybody had different answers. Everybody had resources, or they were able to provide resources, so I kind of forced everyone to get in one particular spot and gave them the opportunity to speak their truth about the issue, and now we’re working together. If we can’t talk about it, nothing we’re going to do is going to help.”

Kent Fire Chief Bill Myers lauded Sejat’s ability to get so many people to sit down in one place and share their perspectives.

“She’s been a great facilitator who has really taken an interest and gone above and beyond most people who try to make a difference,” he said. “She has really gone that extra yard to help out people who are homeless and who may be deprived when it comes to food needs. She’s been doing a great job.”

More than anything else, Sejat has helped KFD identify a clearer path forward.

“Without her and the knowledge she’s brought to the community, we would not have as big a focus as we do now. I think she’s really helped us in bringing it to light and the needs of that community, in trying to assess them as well as respond to them in a positive way,” he said.

The Kent Fire Department recently added a part-time community paramedicine staff member whose is to reach out to Kent’s underserved community and determine if there is a way to connect them with needed social services.

“She’s been going down to Kent Social Services and doing blood pressures, just talking with people, allowing them, if they want to, to talk about their medical issues, she’ll listen,” Myers said. “If they don’t, she’s just a friendly person who’s there to listen and to help out in whatever way she can.”

The staffer, a registered nurse and paramedic, also ensures homeless people are getting proper medical care. For example, she identifies people who are being discharged from the hospital but don’t have a support network to help them obtain medications, access follow-up medical appointments or whatever else they need.

The position is funded through a CDC grant.

“When we brought the paramedicine concept into our department, [treating the homeless population] was one area that we knew we wanted to address,” Myers said.

Kristen Pool, Adult Services manager at Kent Free Library, is also optimistic about the group. She is curious to see if the group will focus on the homeless population’s short-term or longer-term needs.

“I think there are a lot of  great resources in Portage County for the unhoused population or people who are teetering on maybe heading in that direction,” she said. “There’s hidden gems. Coleman is one, Townhall II is wonderful, Family and Community Services, PMHA. There’s a lot of resources, but I think sometimes people are reluctant to get into that, seeing it as a process, or they don’t know about it, but I think there’s a lot of good those organizations do.”

Some people don’t know about the resources, don’t know how to ask for them, lack the computer skills needed to access them, or are put off by what can be a lengthy application and waiting process, she said.

Library staff focus on what they need instead of wondering why they need it, Pool said.

“We really treat them just like any other patron,” Pool said. “Really, that community just wants to be in a place where they feel comfortable, and they want to be left alone. They really go out of their way not to be a problem that’s going to get attention from other patrons or from the staff. We know a lot of them by name, and we have chats with them, and check in on them, so we have a pretty good rapport with them.”

Noting that it is difficult to discern if a person is homeless or is experiencing some other issue, Pool said library staff err on the side of being kind and helpful to everyone.

When library staff see a person who stays in the library for a length of time, they may introduce themselves, start a conversation, and ask if the patron needs anything. Answers range from a ride back to wherever they may have come from, a meal or shelter.

“Librarians are people who try to connect people with the information and resources they need. It’s our second nature to step in and see what we can do,” Pool said.

If possible, library staff help connect the person with needed resources. If not, or if the person declines those resources, the library serves as a heating and cooling center, provides a place to charge cell phones, and offers internet access regardless of possession of a library card. The library also provides comfortable spaces, including a cafe where people can bring food in to eat, she said.

Gathering on Homelessness members have struggled with a simple definition of homelessness. Turns out it’s not simple. The federal government doesn’t consider a person who is couch surfing to be homeless, and limits that person’s access to resources and benefits, Sejat said.

Members also shared what resources everybody has, and what each organization does to combat homelessness. Instead of piecework approaches, perhaps a complete picture of who provides what resource, where, and how would be more helpful to all involved, she said.

“A misperception is that people are homeless by choice,” she said. “It’s not always a choice. You have to go through all of these levels to become homeless. Think about people coming out of foster care. They don’t have access to family, so they have to exhaust all the resources the government gives, and sometimes that’s hard to navigate, and that’s how they become unhoused.”

Many organizations in the city provide support to homeless people, but it can be difficult to connect those services with people who need them. Sejat’s goal is for the group to create a pamphlet that would outline what resources are available, where, and by whom.

“When you unfold it, it will be a physical map of Portage County, mostly of the Kent area, and it will have visual icons of what you can get in each spot, so a little food icon for places you can get a warm meal, some type of icon to represent a heating center, and housing, so people can see it visually as well. I’m hoping we can also put bus lines on this map as well,” she said.

Though Sejat will graduate in December, she hopes the group will be solid enough to continue after she has moved on. Perhaps in addition to pooling knowledge, additional resources to help unhoused people could be created, she said.