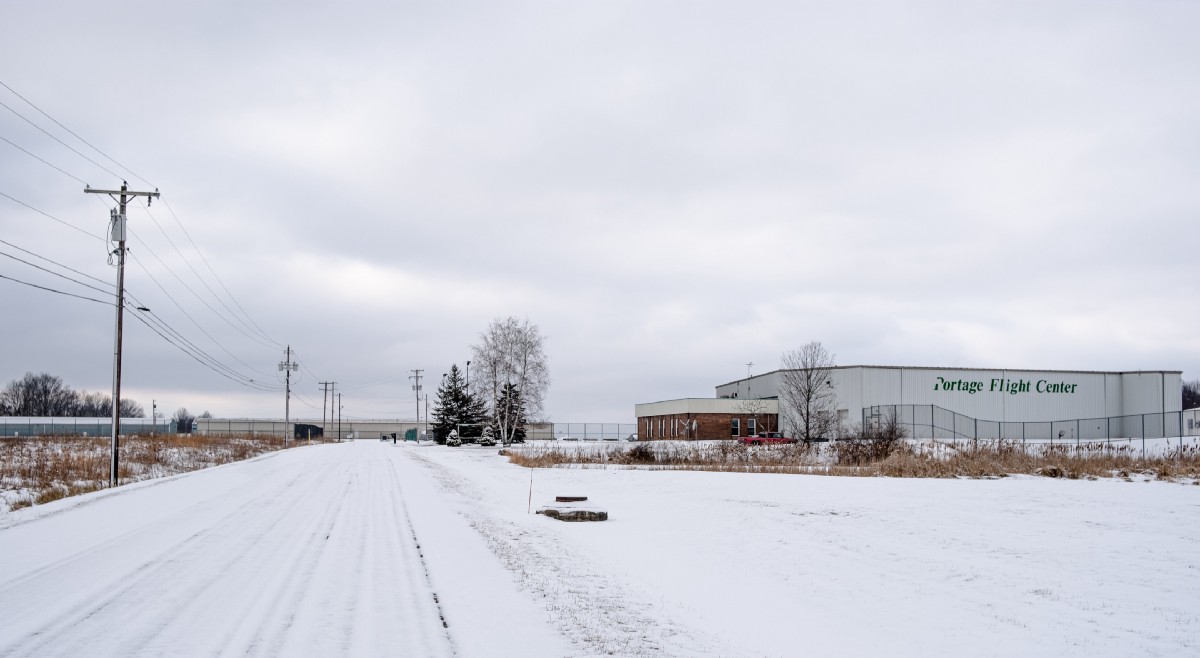 Nanway Boulevard, which leads to the Portage County Regional Airport, is full of potholes and just one of the many infrastructure improvements that will cost the airport millions. Michael Indriolo/The Portager

The Portage County Board of Commissioners pressed forward with its plan to take over the county’s airport on Tuesday, rescuing the airport authority from the burden of overseeing tens of thousands in unpaid bills and millions in future infrastructure costs.

The Portage County Regional Airport Authority, a management board of eight volunteers, has been encumbered by several unforeseen expenses over the last few years. They currently owe about $75,000 in months-old bills and have only about $35,000 available to pay them, Board President Homer Lucas said.

County commissioners set in motion the process to take ownership and management of the airport at a special meeting Tuesday morning.

“The board has known for quite a few years that they were having dwindling reserves,” said Todd Bragg, Portage County’s budget and financial management director, in an interview with The Portager. “Maintenance wasn’t necessarily able to be kept up because they didn’t have the money to put towards it. It’s been a slow-moving wreck.”

The airport board will now have to pass a resolution to dissolve itself and transfer the airport’s deeds and responsibilities to the county commissioners. The commissioners could have control of the airport in as little as a few months.

“Our board is quite willing to do that,” Lucas said. “We think that’s a positive step forward for the airport, and I think it’ll allow more of a cohesive management.”

The airport board currently owns the deeds to the property; however, the airport itself remains a county asset, and its board needs to receive approval from the county commissioners for significant projects. The board functions as an intermediary management team, handling operations to alleviate the commissioners.

The county commissioners still need to determine how to staff and insure the airport once they take ownership. But with the airport under their direct management, the commissioners would be able to more efficiently and professionally tackle problems and apply for grants through the various county departments, Bragg said during the meeting.

“I think having the county involved in it firsthand, they’ll be able to deal with those things and have maybe a little longer-term look than the airport authority gets basically going from year to year,” Lucas said.

The airport’s largest expenses have come from damages to their infrastructure. About five years ago, one of the airport’s hangars blew down. The hangar provided about $25,000 of annual revenue and, because it was under-insured, the airport could not replace it, Bragg said.

The airport board has sought grants from the Federal Aviation Administration, but with next to no available money, it could not pay the 5 percent funding match that would be required of them, Lucas said.

Bragg said repairing other delayed maintenance issues would cost the county about $3 million. The most pressing of these is the road into the airport, Nanway Boulevard, which is peppered with potholes. Although these maintenance issues don’t detrimentally impair the airport’s day-to-day operations, the county has been saving up the last few years for substantial projects like the airport and has enough expendable funds to do it, Bragg said.

“If the county owned it, then we would take that on and do it,” Bragg said. “It’s these extra things that have just kind of been hanging out there in no-man’s land for quite a while. The county would want to step in and just take care of that.”

Taking care of those issues will allow more businesses to use the airport for quick travel. Lucas said Portage County’s airport is more accessible than busier airports in Akron and Cleveland. County commissioners have discussed establishing usage and hangar rental fees as a way to generate revenue and make the airport more self-sufficient, but Bragg said the county hasn’t yet formally considered those ideas.

The airport also hosts a local chapter of the Experimental Aviation Association, an organization for flying enthusiasts. The chapter has helped organize Celebrate Portage events among many others over the years.

“Flying is really just quite an experience,” Lucas said. “It’s just something unmatched. I think all pilots feel a sort of kinship with one another because of that kind of experience.”