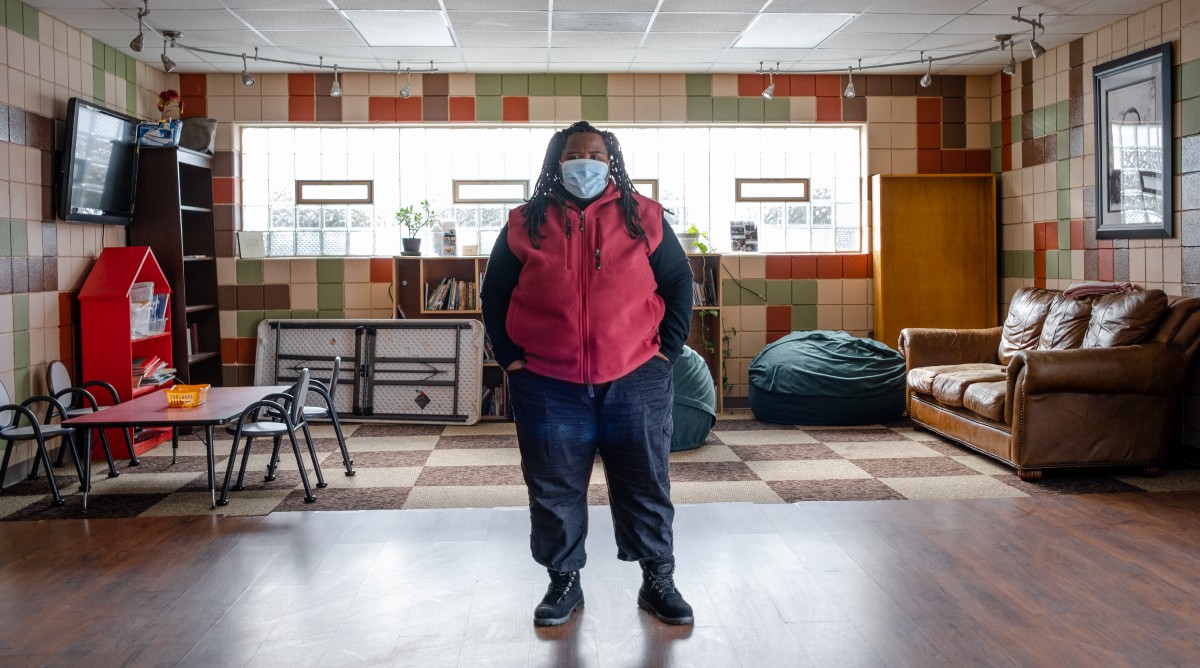 King Kennedy Center Director Myia Sanders said some residents of the McElrath neighborhood have been waiting their whole lives for the construction of a gym on the complex. Michael Indriolo/The Portager

Although county commissioners suggested they would approve the project last year, they have not released funding because the application was not in line with a new approval process

For nearly 50 years, community leaders in Ravenna’s McElrath Park neighborhood have wanted a gymnasium at the King Kennedy Community Center. Many haven’t lived long enough to see it become a reality.

“I just want them to be able to see it,” said Myia Sanders, the center’s director. “If you put all your hard work in, it’s a beautiful thing to say, ‘Look, it paid off after a while. It’s here.’ Some people may even cry.”

But the McElrath Park community may have to wait a bit longer. County commissioners said the center’s application for one last tranche of funding from the county, which it needs to complete the project, did not follow a newly implemented procedure.

The commissioners signaled hope that the project’s funding will be approved within a few weeks, but stopped short of guaranteeing the roughly $127,000 the center needs to round off the $1 million construction project. They said the committee reviewing the project will very likely recommend the commissioners approve it.

The King Kennedy Center in Ravenna is a community staple for residents of the McElrath Park neighborhood. The new gymnasium would greatly expand the center’s size, creating space for children’s activities and community-enriching programs. It would also allow the center to reach people in other parts of the city, Sanders said.

“I don’t even really focus on how it makes me feel,” she said. “I long for the ones who have been waiting for 50 years to see it going up. Those who are still alive, I believe in my heart they deserve to see that.”

The new space is needed now, during this pandemic winter, more than ever, she said. With limited space in the center, it has had to strictly limit occupancy, leaving the community, especially children, without a central gathering place. The gymnasium would provide enough space for children to play while maintaining a safe distance from each other.

The project acquired nearly $700,000 from the state and nearly $170,000 from the Portage County Mental Health and Recovery Board. Yet rebar, steel beams and a bulldozer for the construction have rested largely untouched outside the building since the summer. The $127,000 from the board of county commissioners would allow them to move construction forward after breaking ground last year, but that money, coming from a county revolving loan fund, has been held up by a recently established approval process.

Frank Hairston of the Portage County NAACP is one of those community leaders who has been working to get the gymnasium for decades. He said during the commissioners’ meeting Thursday that he’s concerned the project could lose its state funding if it doesn’t proceed soon. Mark Frisone, executive director of Family & Community Services, the King Kennedy Center’s parent organization, applied for the funding from the county in September.

The process requires potential loan recipients to file certain application paperwork before a given date. The committee then evaluates the submitted applications and ranks them according to a fixed set of criteria.

This process was implemented because the county had previously been inundated with sporadic applications, making it difficult to prioritize competing requests. The county’s community development block grants are only available every other year, so the commissioners sought to fill funding droughts with this new revolving loan process. Many had complained that the revolving loan funds hadn’t been fairly distributed.

The application window for this round of revolving loans had already concluded when Frisone submitted the application. Commissioners also said those behind the King Kennedy Center project have not filled out the necessary paperwork in the proper order throughout the process.

“That’s my issue,” said Board President Sabrina Christian-Bennett during the Jan. 28 county commissioners meeting. “The whole reason we put the process in place is so that it would be fair and equitable to everyone to have the chance [to apply for funding], and I was told that process was not followed.”

In the case of the King Kennedy Center, former Board President Kathleen Clyde had requested the board proceed with funding the project nonetheless, Bragg said.

“We had been working on that project before that, in conversation with the commissioners,” Hairston said in an interview with The Portager. “We were under the thought that everything was fine, and all of a sudden in the last couple of weeks, it looked like there might be some concerns.”

At this week’s county commission meeting, Christian-Bennett said she believed the project could be funded in March. Neighborhood Development Services, one of the organizations represented in the application committee, could present its recommendation to the board within the next few weeks, she said. Brown, the committee representative from Neighborhood Development Services, told Christian-Bennett she didn’t see any reason why the project would be rejected.

“By no means am I against supporting the project,” Christian-Bennett said in an interview with The Portager. “That’s not it. I’m a stickler for rules and following things.”

She chalked these missteps up to miscommunication and misunderstanding. She said she believes the project is worth funding and will serve the community well.

In the meantime, Hairston said he’s waiting for the final result, hoping the commissioners’ prediction that the project will be approved holds true.

“This gym is not just a gym,” he said. “You have to understand that we also will be able to have programs for seniors. The reason mental health is putting money in, they can run some programs out of the King Kennedy Center. We’re looking at AxessPointe to have a doctor and a dentist in the community. This gym is very important. Not just the gym, but all the other things that are going to come with it which we don’t have now.”