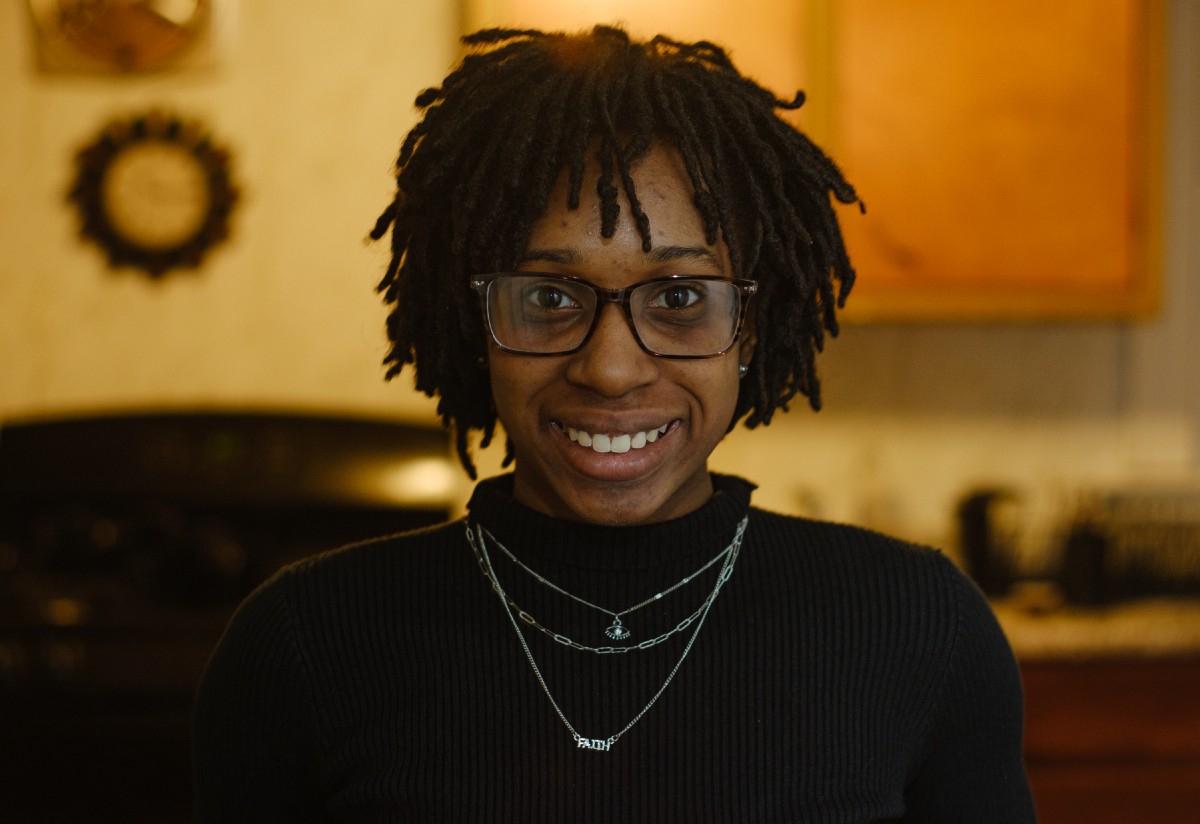 Imani Simmons said she’s been publicly humiliated by the sheriff’s office posting her personal information on its Facebook page. She said she missed a court date for driving with a suspended license. Michael Indriolo/The Portager

For two days, Imani Simmons, a 21-year-old University of Akron student, has endured a flood of Facebook messages and notifications. Some are mocking her appearance and saying she looks like a criminal.

“It’s been going on for two days,” she said. “I’ve been crying all the first day and all the second day because of all the comments and messages that I’ve gotten.”

Simmons is one of 13 people whose personal information, fashioned to look like wanted posters, appeared on the Portage County Sheriff’s Office Facebook page, warning its 8,000 followers “do not attempt to approach.” Far from hardened criminals, the individuals had missed court dates for traffic citations ranging from seatbelt violations and speeding tickets to OVIs.

The sheriff’s office said it was an attempt to enlist public assistance to resolve a backlog of more than 4,000 outstanding warrants and unburden a deputy working six days a week to call and visit offenders.

But many people questioned the ethics of this strategy in the post’s comments and in interviews with The Portager. They speculated that the reputational damage would far outweigh any benefits of the practice.

For Simmons, who missed a court date for driving with a suspended license, the experience has confirmed those fears.

One friend messaged her to say she thinks the feds are looking for her. That friend did not understand that the post was just about a misdemeanor.

“You guys put me on blast like I just killed someone or just robbed the bank,” Simmons said. “It was really bad. People are bullying. I can send you screenshots of people that have talked about that picture, have laughed at me about it. Now everyone’s thinking like, ‘Oh, you’re just some criminal that don’t take care of your stuff.’”

The blowback for Simmons has not ceased since the sheriff’s office posted her photo, name and case number on Tuesday.

“It really messed up my reputation,” she said. “People were laughing at me, calling me ‘jailbird,’ every type of name in the book. ”

Simmons’ mother, Shayla Gause, said she has spoken to her on the phone about the post several times this week.

“It does bother you when your child is upset because it’s the internet, you know, it’s there now,” she said. “It’s not like it’s normal paper, and you can just throw it away.”

Simmons, originally from Warren, attends college and works in an elementary school. She said she works hard at her job and cares deeply about the children she works with. Gause said members of the board of education at the school Simmons works for love her. She’s also applying for scholarships from the university.

She fears the sheriff’s office post could jeopardize all of that.

Simmons was pulled over last February for driving without a license, a first-degree misdemeanor. She pleaded not guilty to buy herself time to pull together enough money to pay her ticket, she said. Then in March, the pandemic set in and the judge told her the court date would need to be postponed. The court was to notify her when a new date was set.

Simmons never received a phone call, she said, and she no longer lives at the address the court sent a summons letter to. She hasn’t received any notice since then that a warrant was out for her arrest, she said.

Responding to the backlash to its social media strategy, Chief Deputy Ralph Spidalieri posted a statement to Facebook. He said the sheriff’s office tried to notify everyone who appeared in the “wanted” post before publishing it.

“Being aware of their warrant, they had the opportunity to take care of it in a timely fashion. Once the warrant is closed, their picture will be removed from the post within a reasonable amount of time,” Spidalieri wrote in the statement.

Simmons saw the post soon after it was published and went to a Portage County courthouse the next morning to take care of it, she said. She turned herself in for the misdemeanor and the judge presented her with a fine of about $380, which she plans to pay this week, she said.

She didn’t want to make a big deal out of all this, she said. She turned herself in and asked that the post be removed, but the person she spoke to at the court told her they could do nothing about the sheriff’s office’s Facebook page, she said.

“They probably think it’s not a big deal, but I swear to God, I cried for two days about this,” she said. “I told myself today, you know, ‘Brush off what everyone says about you or thinks about you now. It’s a new day.’ But then I can’t let it go when it’s only been day three, and people are still messaging me … ‘Hey, look, this is you. Oh my God, what happened to your eyes? Oh my God. Wow, Imani, you’re a thug out here.’ What the heck? I can’t let it go. I can’t let it go.”

She said her life had been going well despite the pandemic initially straining her financially. She lost hours at her job when schools nationwide shuttered last year. Because she was still working, she didn’t file for unemployment. Keeping her composure at work hasn’t been easy this week, she said.

“I’ve been trying to work my ass off just to pay off these tickets so I can get my license back,” she said. “But them putting it out there, it just makes you not even want to go turn yourself in or go give them your money because they already deteriorated me and embarrassed me and put me on blast.

“I hope they really feel good about themselves every night going to bed, laying in their bed knowing, ‘I just made my day because I just ruined someone else’s,’” she said.