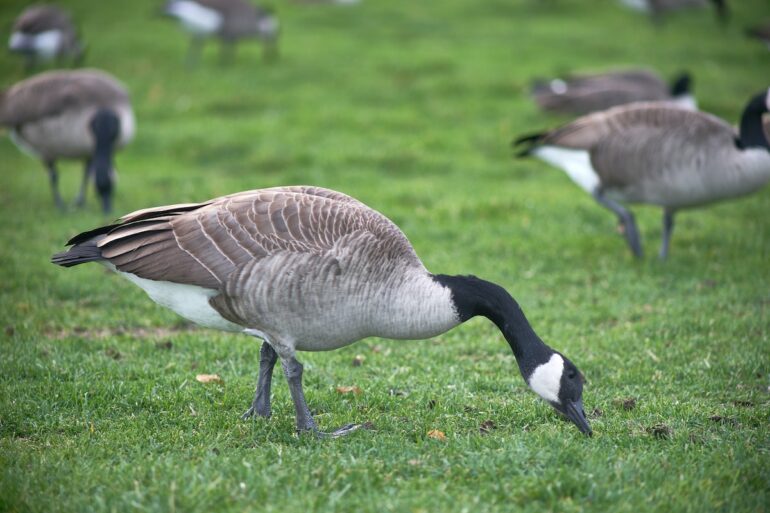 Photo by Wolfgang Hasselmann on Unsplash

Goose poop and what to do about it was a main talking point at the Brimfield trustees’ Wednesday meeting.

It’s everywhere in the township center area, making sports activities, and simply strolling, an exercise in judicious foot placement. The area is also the site of Brimfest, outdoor movie screenings and concerts.

“When they were playing fall ball last year, it wasn’t just that they were stepping in it,” Trustee Nic Coia said. “The soccer balls were shooting goose poop into the air!”

The fields are located at Kelso and Town Square drives behind Brimfield Elementary, and will eventually house two ball fields, a quarter mile walking track, a pavilion and playground equipment.

Trustee Mike Kostensky didn’t put much faith in fencing a nearby retention pond but allowed that it could work as long as trustees also sprayed a non-lethal substance on the surrounding grassy areas. The geese would get stomach aches, and would eventually leave when they associate their gastric distress with the pond and its environs.

Kostensky cautioned his colleagues against using fake coyotes or swans, saying those ploys don’t work. The best option is to hire a person with a dog, he said.

“Another thing we could do if anyone has the time, is they hate speed boats, remote control speed boats,” he said.

Meanwhile, plans for those ballfields are moving forward. Trustees are considering installing repurposed solid steel shipping containers as storage sheds for teams to store their equipment during the season. The containers would offer a more secure alternative than wooden sheds and last longer, trustees said. They would be painted with the township’s logo and maintained.

Trustee Nic Coia said the township has received an “uptick” in complaints over how properties have been maintained, specifically a home on Tallmadge Road next to Altercare of Brimfield.

“I drove by it. It looks terrible. He’s parking his truck in the front again,” Kostensky said.

The property owner did approach the township for permits but did not pull any, Zoning Inspector Mike Hlad said.

Kostensky alleged that the property owner is running a business out of that property and has exceeded the extended time the township has given him to comply with township regulations.

Pending approval by legal council, the trustees added the property to the township’s 2021 “demo list,” which includes a structure on Congress Lake Road, a former meth lab on Howe Road and a structure on Doralee Drive.

“We probably have 15 homes that are in this process. It takes anywhere from a year and a half to two years to get to this point,” Coia said.

Trustees were pleased that a home at 1421 Howe Road has been sold to a new owner who they referred to as a flipper. Rather than slating the dilapidated home for demolition, trustees granted the new owner a 30-day extension prior to initiating demolition protocols, with another 30-day extension to be granted if the owner has met all expectations, including pulling the proper permits.

Turning their attention to upcoming events, trustees noted that current health guidelines are conducive to outdoor gatherings as long as social distancing, proper sanitation and masking is in place.

That gives the green light to Brimfield’s annual Touch-a-Truck event, set for 11 a.m. to 2 p.m. June 19 at Lions Park. Coia started the event three years ago as an event for people to see and touch all the equipment “that makes Portage County go,” and as a welcome Father’s Day weekend activity.

Participants can explore ambulances, tractors, dump trucks, police cruisers, Metro SWAT vehicles and more. Apart from purchases from food trucks, the event is free and typically includes a craft table, though due to Covid this year it may be more of a take-home project instead of one made on premises, Coia said.

“This will be the first big event we’ve had in a year and a half,” Coia said, giving voice to Covid fatigue. But the pandemic continues: Trustees are not sanctioning indoor activities at this time.

Brimfield Parks Director Cassie Weyer is also planning May 8 as Park Cleanup Day: an opportunity for community members to volunteer to clean up Lions and Cranberry Creek parks. Anyone who wishes to participate should contact Weyer at 330-678-0739.

The next episode of Backyard Brimfield will air April 17, she said.