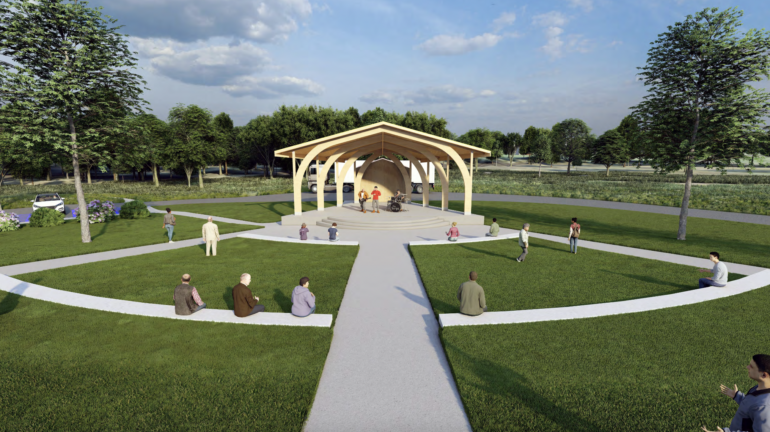 A rendering of a potential design for Streetsboro's proposed community amphitheater. Submitted image

Sticker shock in Streetsboro didn’t stop city leaders from voting unanimously Monday to give $49,990 to The Thrasher Group, a West Virginia project management firm, to prepare a construction and design plan for a 1,200-capacity outdoor amphitheater.

Streetsboro has already paid some $20,000 for a conceptual design for the amphitheater. The city had budgeted almost $18,000 for the construction and design plan, only to learn that The Thrasher Group employee who wrote the original bid had been let go “for several reasons and for providing low fees and requesting change orders as a common practice.”

According to a Nov. 16 email from Steven D. Hamit, regional manager for The Thrasher Group, the now-former employee did not include field surveys, proper contouring, structural and utility designs for the proposed stage and restroom/concession structure, drainage design, parking lot design, or permit preparation for the Portage County Soil Conservation District and Ohio EPA.

“This gentleman that is apparently no longer with the company that made the error, I question the person who was above him who didn’t check the figures. It should have been caught before it came to council,” Council Member Chuck Kocisko said.

Though he voted to spend the money, Council Member Justin Ring said city leaders went with The Thrasher Group because their offer was “a pretty good amount cheaper” than the only other firm that submitted a bid.

“If their bid had included the actual numbers we may have come to a different decision,” Ring said. “We may have chosen the other group. Certainly with what the cost is turning out to be, it’s substantially higher than what was expected.”

Echoing Kocisko, Ring wondered how the bid document could have gotten all the way to city council with the mistakes still in place.

Even while reeling from the financial sting, Ring said switching to a different company at this point could actually end up being more expensive.

The $1.75 million price tag, which The Thrasher Group has already revised downward to $1.5 million, is a “very, very rough estimate” that could easily be cut further, Ring said. Whether it will approach the $750,000 that city council’s Stage Committee had originally envisioned is anyone’s guess.

The higher figures, Ring said, “represent the Cadillac, the dream. Once we know how much the ‘everything we want’ would be, now we figure out what we don’t need, what we can live without, and where we can whittle it down to a price point that we’re comfortable with.”

Council will be able to tell from the forthcoming construction documents precisely where dollars are being spent, he said.

“That was the plan the whole time, to get that idea of a dream scenario where we had all the money we wanted, and then come back to reality,” he said.

If the amphitheater is built the way Parks and Recreation Director Greg Mytinger currently envisions, Streetsboro could see a 43-foot stage, large enough for most local and regional acts. Paved parking, concessions, and restrooms are also slated for the site, which would be located just east of Streetsboro’s police station on state Route 303.

Council members agreed to consider Kocisko’s pleas that the city rent, buy or build a portable stage. Kocisko said he fears the proposed amphitheater will sound the death knell for Streetsboro Family Days, a long-time summer festival in City Park. Beer sales provide over half of Family Days’ income, Kocisko said, expressing concern that people will not walk from the proposed amphitheater, where entertainment would be presented, to City Park, where the beer tent would be.

One solution, though logistics are yet to be determined, could be to move the entire Family Days event to the amphitheater site, Ring said.

Family Days, a private, nonprofit organization, does not receive city funding. Ring is questioning that as well.

“It is a community event that benefits our residents, and for us to not be participating at all… I think we should,” he said.